With US equity markets on a 7-day roll and excited TV anchors proclaiming the worst over and new all-time highs must signal recovery as they ‘celebrate’ five years on from Lehman, the following two charts of the state of real America should open a few eyes to just how blinded American has become to the truth (unless you live it). A stunning 20.0% of Americans were found to have struggled to afford food in the last year – surging in recent months to its highest since the peak of the crisis in 2008 – as American’s ability to consistently afford food has not recovered to pre-recession levels. Furthermore, Americans access to basic needs (13 factors including housing, healthcare, and food) hovers near record lows – dramatically lower than pre-recession levels. The Gallup polls point to a very different image of American than Dow 15,000 – and is set to get worse as the food stamp program is set to be cut in November.

More Americans are struggling to afford food — nearly as many as did during the recent recession. The 20.0% who reported in August that they have, at times, lacked enough money to buy the food that they or their families needed during the past year, is up from 17.7% in June, and is the highest percentage recorded since October 2011. The percentage who struggle to afford food now is close to the peak of 20.4% measured in November 2008, as the global economic crisis unfolded. 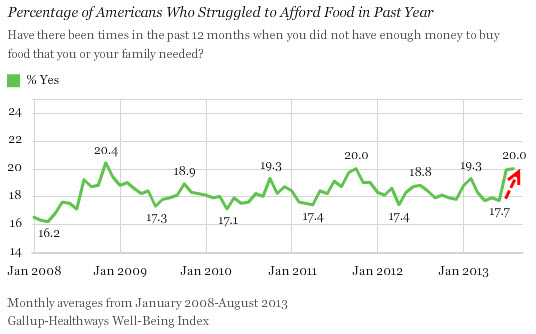 Americans remain as likely to have access to basic necessities in general now as they were in October 2011, when it was at its lowest point. The Basic Access Index, which includes 13 questions about topics including Americans’ ability to afford food, housing, and healthcare, was 81.4 in August, on par with the all-time low of 81.2 recorded in October 2011. 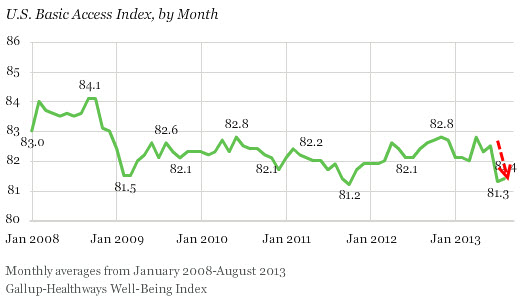 One in five Americans reported in August that they did not have enough money to buy the food that they or their family needed in the past year, more than said so earlier this year and near highs seen since 2008. Similarly, Americans’ overall access to basic necessities has not recovered to the levels seen before the economic crisis. These findings suggest that the economic recovery may be disproportionately benefitting upper-income Americans rather than those who are struggling to fulfill their basic needs.

Stagnant wages are one possible reason why Americans’ ability to afford food and other basic needs has not improved since the recession. According to an August 2013 Wall Street Journal analysis of Labor Department data, “the average hourly pay for a nongovernment, non-supervisory worker, adjusted for price increases, declined to $8.77 [in July 2013] from $8.85 at the end of the recession in June 2009.” Depressed wages are likely negatively affecting the economic recovery by reducing consumer spending, but another serious and costly implication may be that fewer Americans are able to consistently afford food and meet other basic needs.

Increasing wages alone, however, is not enough to significantly increase the percentage of Americans who have the ability to afford food. Federal government programs also play a role in addressing this issue. As food stamp (SNAP) enrollment increases, Republicans in Congress are proposing substantial cuts and reforms to the program, while Democrats are resisting such reductions. Regardless, food stamp benefits are set to be reduced in November after a provision of the 2009 fiscal stimulus program expires. Therefore, it is possible that even more Americans may struggle to afford food in the immediate future.