“It’s getting concerning,” notes one fixed-income banker, Puerto Rico muni bond yields “never got near 10% [yields] even in the crisis.” Some of the 27-year maturity Puerto Rico bonds just traded at a dismal 67 cents on the dollar (10.082% yield) and the most recently issued 2036 Electric Power bonds have collapsed from par a month ago to just above 82 cents on the dollar today. As the WSJ reports, the fall in prices also is a sign of investor risk aversion in the wake of Detroit’s record municipal-bankruptcy filing in July; but it seems the anxiety and outflows from ETFs is having just as big an impact as Puerto Rico bonds now trade cheaper than Detroit’s. “It’s out of whack,” one analysts warns, though the island’s double-digit unemployment and recent weakness in economic indicators somewhat support the concerns – and while the “yields are attractive” it is possible that the island’s borrowing costs could go higher as supply is extremely heavy in coming months. With 77% of managers holding Puerto Rico bonds, this is a problem… 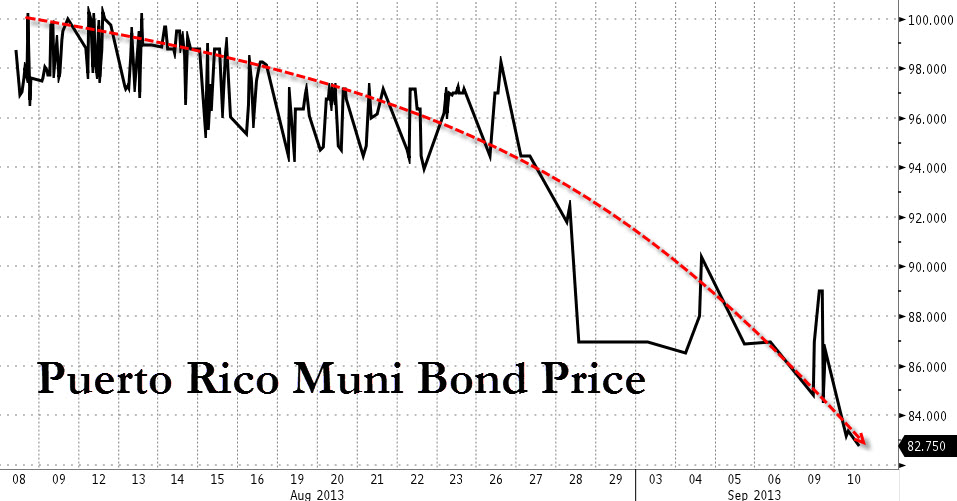 Puerto Rico debt is a flash point in the municipal-bond market, because the island is a prolific debt issuer and its bonds are widely held. About 77% of U.S. mutual funds hold some sort of Puerto Rico debt, according to Morningstar. The island’s bonds are attractive to investors because they offer relatively high yields, and unlike most other municipal debt, interest on them is exempt from federal, state and local taxes.

Year-to-date through Friday, the S&P Municipal Bond Puerto Rico index has fallen 17%, while the broader market, as tracked by the S&P National AMT-Free Municipal Bond Index, has lost 5.9%.

With its borrowing costs increasing, it is questionable whether Puerto Rico will be able to successfully borrow, said Dan Solender, director of municipal bond management at Lord Abbett. “The cost might be high while the risk aversion is strong and the outflows continue,” he said.