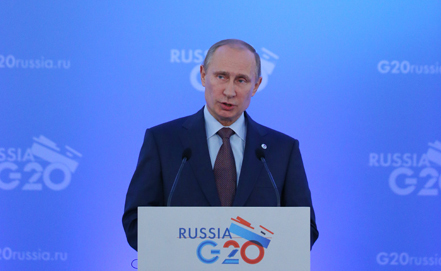 The U.N. secretary-general and Pope Francis also came against the use of force against Syria, the president said, adding that the population in these Western countries were against the military operation in Syria.

Putin had spoken to President Barack Obama for about thirty minutes but neither of them had changed his positions as a result of the meeting.

“This was a meaty and fruitful conversation and it took place in a friendly atmosphere but each of us remained clinging to old positions as a the result,” he said.

Putin noted that despite disagreements, he and President Obama understood each other’s arguments. “We listen to them and try to analyze,” Putin said.

The Russian leader said that he and his U.S. counterpart had agreed on ‘some options’ of a peaceful settlement of the Syrian problem. The Russian Foreign Ministry and the U.S. State Department will discuss the theme soon.

He indicated that the problem of the former CIA technology analyst Edward Snowden, whom Russia had granted asylum, was not discussed at the meeting.

Russian President Vladimir Putin also said he had spoken to President Barack Obama for about thirty minutes but neither of them had changed his stance.

At the same time, Vladimir Putin said  Russia will help Syria in case of external aggression,

“Will we help Syria? We will,” the Russian leader said recalling that Russia had already been helping Syria through arms supplies and economic and humanitarian cooperation, including provision of humanitarian aid.

A military action against Syria will have a highly deplorable impact on international security at large, Putin emphasized.

He said he was surprised to see that ever more participants in the summit, including the leader of India, Brazil, the South African Republic, and Indonesia were speaking vehemently against a possible military operation in Syria.

Putin cited the words of the South African President, Jacob Zuma, who said many countries were feeling unprotected against such actions undertaken by stronger countries.

“Given the conditions as they, how would you convince the North Koreans, for example, to give up their nuclear program,” he said. “Just tell them to put everything into storage today and they’ll be pulled to bits tomorrow.”

He underlined the presence of only one method for maintaining stability – “an unconditional observance of international law norms.”

2 thoughts on “Putin: ‘Will We Help Syria? We Will’ – ‘I Do Not Want To Think That Any Other Country Will Be Subjected To Any External Aggression’”