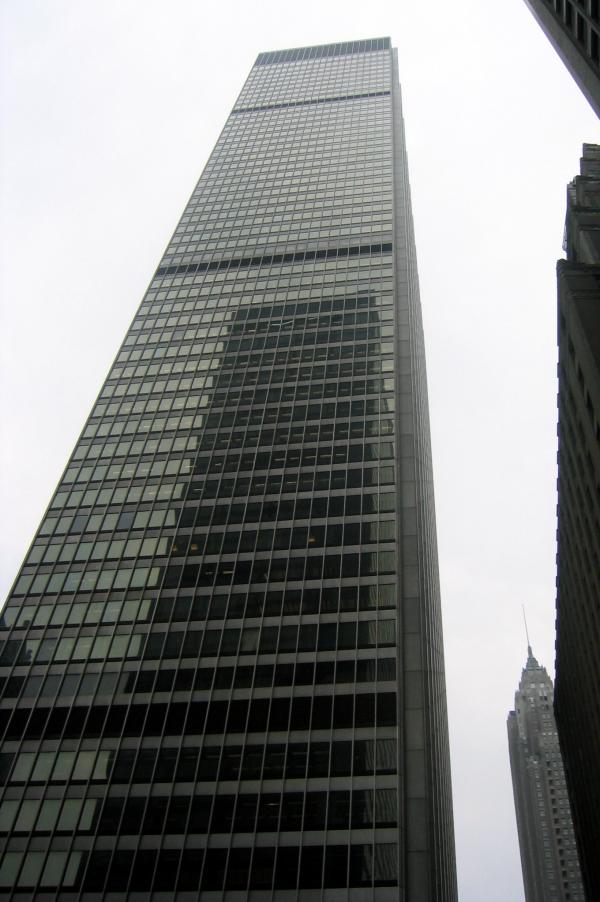 – JPMorgan Is Selling The Building That Houses Its Gold Vault (ZeroHedge, Aug 18, 2013):

On the surface, there is nothing spectacular about the weekend news that JPMorgan is seeking to sell its 1 Chase Manhattan Plaza office building. After all, the former headquarters of Chase Manhattan Bank, located deep in the heart of the financial district and which was built by its then chairman David Rockefeller, is a remnant to another time – a time when banking was about providing loans, not about managing and trading assets which has become the realm of Midtown New York, and since JPM already has extensive Midtown exposure with its offices at 270, 270 and 245 Park, the 1 CMP building always stood out as a bit of a sore thumb. Of course, as Zero Hedge readers first learned, the big surprise is literally below the surface, some 90 feet below street level to be exact, where the formerly secret JPM gold vault is located, which also happens to be the biggest commercial gold vault in the world.

It was only a month ago when we learned that JPM was planning to exit the physical commodity business, and today we know that the firm is set on disposing of its one crowning asset in the commercial gold vaulting industry. This begs the question: is JPM set to fully and completely exit the precious metals vertical which it inherited when it was handed Bear Stearns on a $10 platter (together with the now defunct firm’s legacy short positions)? If so, is it also in the process of unwinding any and all legacy precious metals exposure including rumored “whale-sized” shorts in the paper silver and/or gold axes, and what happens to the price of silver and gold when a massive stock position becomes “flow” in the other direction (i.e., short covering)?

Finally, if indeed JPM is getting out dodge, is there some hope that a semblance of normalcy will return to a market best known for the AM-PM closing fix arbitrage, as well as the occasional bid stack take out slam and close (and open) banging? Or, will the buyer of the building, and vault, be none other than the Federal Reserve, which will merely take this opportunity to merge its own, and the world’s largest commercial gold vaults, which just happen to be located next to each other and connected by tunnel deep below the ironically named Liberty Street?

More from Bloomberg on the sale process:

JPMorgan Chase & Co. (JPM) is seeking to sell 1 Chase Manhattan Plaza, the lower Manhattan tower built by David Rockefeller in the late 1950s, as the company reduces its office space in the city.

The bank would relocate about 4,000 employees, most of the people who work in the 60-story skyscraper, to other New York locations, said Brian Marchiony, a spokesman. JPMorgan occupies about half of the space in 2.2 million-square-foot (204,000-square-meter) building, according to CoStar Group Inc. (CSGP), a Washington-based firm that follows office leasing.

The building may fetch at least $600 million, according to a person with knowledge of the offering. The cost to buyers would be higher because they would assume any conversion expenses, said the person, who asked not to be identified because the discussions are private.

An offering of the tower, a city landmark designed by architect Gordon Bunshaft, would test the downtown office market. Shrinking financial companies have left lower Manhattan landlords with at least 6.3 million square feet of space to fill, according to data from brokerage Newmark Knight Frank Grubb. The tower may achieve its highest value as a mixed-use property, with a hotel, additional retail or apartments added, said Dan Fasulo, managing director of Real Capital Analytics Inc., a New York-based research firm that tracks commercial real estate sales.

“You could do a department store in the base,” he said. “It’s a very exciting potential mixed-use opportunity, in my mind. I think the market will receive it very well.”

And the vault in the basement, “longer than a football field,” would become a restaurant or a paintball arena?

For those who missed it, here is the excerpt from the exclusive Zero Hedge expose shining some light on the world’s biggest and now supposedly almost empty, commercial gold vault.

From: Why Is JPMorgan’s Gold Vault, The Largest In The World, Located Next To The New York Fed’s?

Curiously (or perhaps not at all), when the CME on behalf of JPM submitted the certification filing alongside the comparable such supplements as filed by Brinks above, it requested a FOIA (Freedom of Information Act) confidential treatment. As a reminder, to be eligible for FOIA exemption status the protected information must be of vital importance to the nation’s safety. This is precisely what JPM thought the details surrounding its New York vault are. To wit:

Please contact the undersigned at (212) 299-2207 should you have any questions concerning this letter.

Yet oddly enough, the FOIA request letter itself, while also being filed with a request for Confidential Treatment, never got it. As a result it was posted at this address. Ooops.

But a far bigger oops, is that on the first page of said declassified confidential FOIA app, in black ink, we get the missing piece:

In addition, the Exchanges are providing the Commission with the application summary of requirements for the JP Morgan Chase Bank N.A. facility located at 1 Chase Manhattan Plaza, New York, NY.

And so, despite the extended attempts at secrecy, we finally hit the proverbial goldmine vault.

So what do we know about 1 Chase Manhattan Plaza. Well, aside from the fact that the 60-story structure, built in the 1950s, was the headquarters of the once-legendary Chase Manhattan corporation, and which when it was built was the world’s sixth tallest building, not much.

So we set off to learn more.

To learn more, we first went to the motherlode: the Landmarks Preservation Commission, whose report on 1 CMP describes everyone one wants to know about this building and then much more, such as that:

One Chase Manhattan Plaza combines three main components: a 60-story tower, a 2½ acre plaza, and a 6-story base, of which 5 floors are beneath grade.

So the old Chase HQ, once the stomping grounds of one David Rockefeller, and soon to be the other half of JPMorgan Chase, has 5 sub-basements, just like the NY Fed…

Excavations, said to be the largest in New York City history, reached a depth of 90 feet

Or, about the same depth as the bottom-most sub-basement under the NY Fed…

But then we hit the jackpot:

Originally constructed with white marble terrazzo paving and enclosed by a solid parapet of white marble travertine that was personally selected by Bunshaft in Tivoli, Italy, the L-shaped plaza levels the sloping site and conceals six floors of operations that would have been difficult to fit into a single floor of the tower, including an auditorium seating 800 [and] the world’s largest bank vault.

And there you have it: the JPM vault, recommissioned to become a commercial vault, just happens to also be the “world’s largest bank vault.”

Digging some more into the curious nature of this biggest bank vault in the world, we learn the following, courtesy of a freely available book written by one of the architects:

On the lowest level was the vault, which rested directly on the rock – the “largest bank vault in the world, longer than a football field.” It was anchored to the bedrock with steel rods. This was to prevent the watertight, concrete structure from floating to the surface like a huge bubble in the event that an atomic bomb falling in the bay would blow away the building and flood the area.

In other words, the world’s biggest bank vault, that belonging to the private Chase Manhattan empire, and then, to JPMorgan, was so safe, the creators even had a plan of action should it sustain a near-direct hit from a nuclear bomb, and suffer epic flooding (such as that from Hurricane Sandy).

It is no surprise, then, that the street entrance to this world’s biggest vault located under 1 Chase Manhattan Plaza makes the entrance to any medieval impregnable fortress seem like child’s play in comparison. Courtesy of Google StreetView: 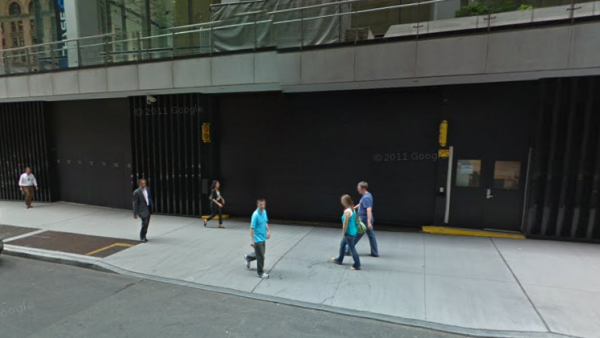 Yet it is not what is on this side of the street, which just happens to be known as Liberty Street, that is what is the most interesting part of this whole story. It is what is on the other: 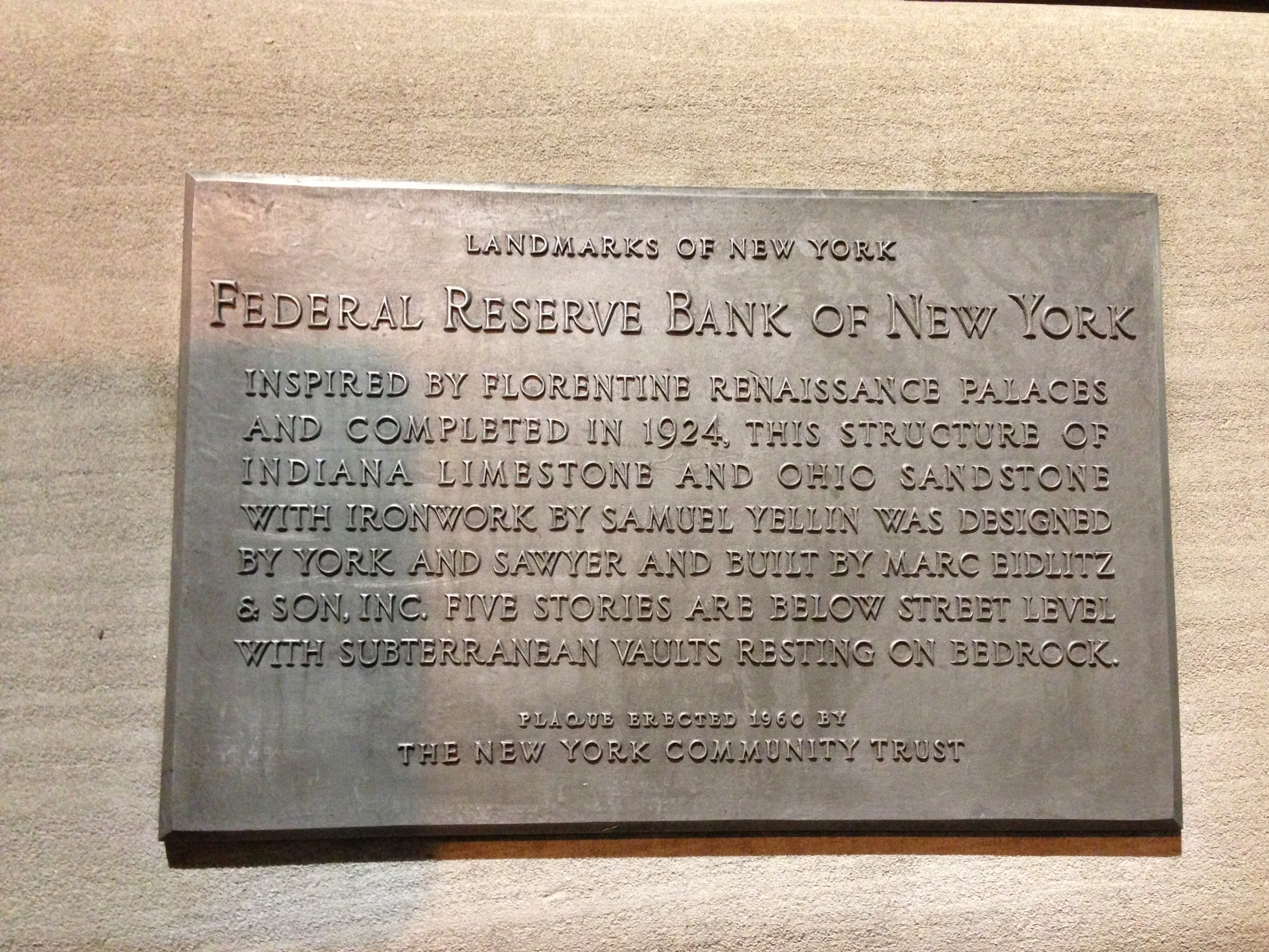 Or, shown another way… 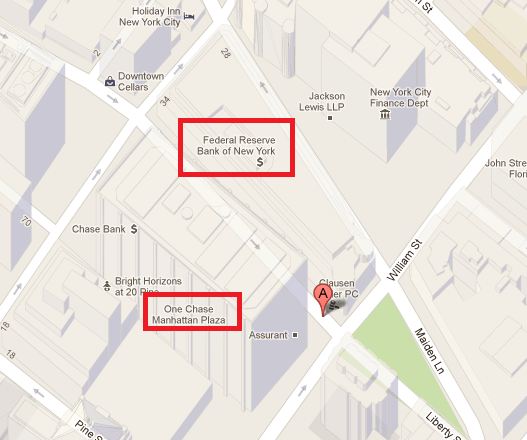 That’s right, ladies and gentlemen, as a result of our cursory examination, we have learned that the world’s largest private, and commercial, gold vault, that belonging once upon a time to Chase Manhattan, and now to JPMorgan Chase, is located, right across the street, and at the same level underground, resting just on top of the Manhattan bedrock, as the vault belonging to the New York Federal Reserve, which according to folklore is the official location of the biggest collection of sovereign, public gold in the world.

At this point we would hate to be self-referential, and point out what one of our own commentators noted on the topic of the Fed’s vault a year ago, namely that:

Chase Plaza (now the Property of JPM) is linked to the facility via tunnel… I have seen it.  The elevators on the Chase side are incredible. They could lift a tank.

… but we won’t, and instead we will let readers make up their own mind why the the thousands of tons of sovereign gold in the possession of the New York Fed, have to be literally inches across, if not directly connected, to the largest private gold vault in the world.

We think readers can do a good enough job on their own.