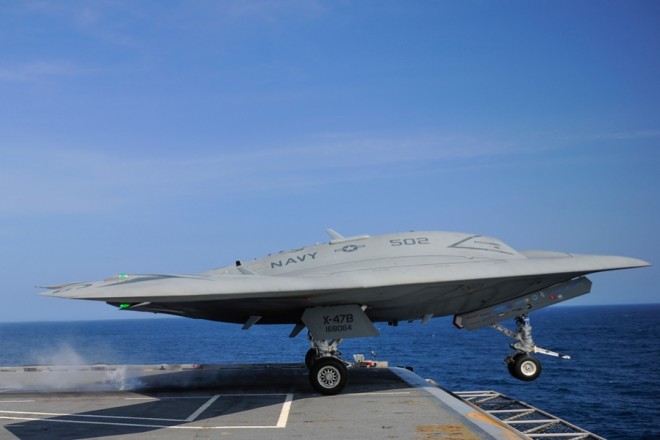 The Navy’s X-47B drone completed its newest round of tests off the Virginia shore last week, making it the first pilotless unmanned jet in history to land aboard a moving aircraft carrier — one of aviation’s most challenging maneuvers.

The Navy heralded the achievement as the future of warfare. “It isn’t very often you get a glimpse of the future,” said Secretary of the Navy Ray Mabus in a statement. “Today, those of us aboard the USS George H.W. Bush got that chance as we witnessed the X-47B make its first-ever arrested landing aboard an aircraft carrier.”

From the Navy’s standpoint, a favorable outcome would prove the continued relevance of aircraft carriers and the Navy’s ability to carry out extended missions beyond what traditional aircraft and their pilots could accomplish.

This round of tests built on the successful launches from the USS George H.W. Bush in May, but this time with mixed results. The two experimental (putting the “X” in X-47B) drones, named Salty Dog 501 and 502, completed the first two carrier landings by deploying a tailhook that caught a wire aboard the ship, like standard fighter jets do, and previously only done by the drone on land. However, a third trial was aborted and a fourth was called off before it was even attempted. Two subsequent runs were cancelled, leaving the X-47B with a 2-2 carrier landing record.

The X-47B, developed by defense giant Northrop Grumman, was funded under a 2007 contract initially worth $635.8 million that has ballooned to $1.4 billion. Northrop Grumman enlisted the help of a dozen other companies, including General Electric, Dell, Moog, and Lockheed Martin, to carry out the contract. But for a project with such a hefty price tag, the X-47B will never be put into operational use. Instead, next year, four companies are expected to compete for a contract to design the next version of the X-47B with an eye toward putting them in the air in 2020, according to the Navy.

What the Navy has learned about the autonomous 14,000-pound drone with a 62-foot wingspan that has a range of more than 2,100 nautical miles is that it is capable of carrying weapons and may well be the forerunner of a drone program that will provide intelligence, surveillance, and reconnaissance—all through state-of-the-art GPS navigation, a high-integrity network connection, and advanced flight control software to chart its territory. The help of a human only comes in the form of a few clicks of a mouse and limited keystrokes on a keyboard.

For all the questions the trial runs have answered in terms of the potential for autonomous technology in combat, it has also raised questions about standards, costs, and the ethical dimensions in carrying out such a program.

The limited and mixed landing results on the USS George H.W. Bush (while still meeting the Navy’s benchmarks) have raised questions about the Navy’s standards for success on such an unconventional program.

“Let’s see how [the X-47B] performs under difficult conditions, because its record under perfect conditions isn’t encouraging,” said Winslow T. Wheeler of the Center for Defense Information at the Project on Government Oversight.

Wheeler said he would like to see if the X-47B can perform well as our trained pilots when it comes to night, extreme crosswinds, rain and a faster moving carrier.

So far, that’s a question the Navy hasn’t answered, but Council on Foreign Relations scholar Micah Zenko says that since the Navy hasn’t set a firm deadline for when this drone program will be put into play, “they’ve built in time to take corrective actions with successive and more realistic flight tests.”

“Since the first drone flight, one enduring lesson is that they crash,” said Zenko, adding, “I suspect the first time manned aircraft took off and landed on carrier decks, that they had difficulties as well.”

But for some observers, risk is the name of the unmanned game.

“That is part of the very appeal of an unmanned system, you can take risks that you wouldn’t with a manned craft, including in testing,” said Peter W. Singer, director of the Center for 21st Century Security and Intelligence at the Brookings Institution and the author of Wired for War.

The question over who bears the cost of those risks has been at the center of some intense debate in recent years. The move to expand the military’s drone potential to include autonomous capabilities comes on the heels of President Obama’s May counterterrorism speech, in which many analysts understood the President to be advocating for a reduction in drone strikes and more stringent guidelines for when they do occur. Critics of the Obama administration’s policies have argued that there has been an overuse of drones across the Middle East, Afghanistan, and Pakistan that has caused extensive civilian deaths with little oversight.

While the president was addressing covert CIA operations in the May speech, the Navy will have to face some of the same ethical questions about combat when the potential for the loss of servicemen and women in battle is removed.

In other words, what keeps the U.S. military from acting irresponsibly when it can remove the risk of Americans? In the case of autonomous drones, not only are Americans removed from the battlefield and the air, but also the cockpit, forcing the question of who is responsible when things go wrong.

“Unmanned systems move the human role geographically, and then, as they become more autonomous, chronologically,” said Singer. “Humans are still involved, but in very different locales, times and ways.”

However, some of the enduring questions about the justification for war will remain, according to some analysts.

“We should always have the same criteria when it comes to acts of war, and we should always be asking ourselves, ‘Is the use of force justified?’” said Lawrence Korb of the Center for American Progress and former assistant secretary of defense under the Reagan administration.

Singer argues that the old legal values remain the same, but they will have have a tougher time in application as technology advances—and that this is nothing new.

“We have to thread not only doctrine questions, but also the legal ones,” said Singer, “Just like we did with past new technologies like the aero plane that Eugene Ely first flew off a warship a century ago.”