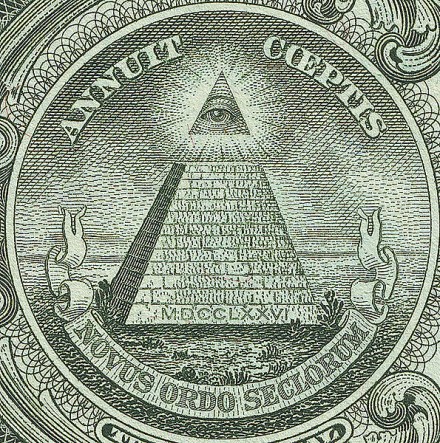 – They Are Systematically Destroying Our Independence And Making Us All Serfs Of The State (Economic Collapse, Aug 13, 2013):

The percentage of Americans that are economically independent has dropped to a stunningly low level.  In order to be economically independent, you have got to be able to take care of yourself without any assistance from anyone else.  Unless you are independently wealthy, that means that you either have your own business or you have a full-time job.  Unfortunately, as you will see below, the percentage of Americans that are self-employed is at an all-time record low and the percentage of Americans with a full-time job has declined to a level not seen in about 30 years.  As a result, more Americans than ever find themselves forced to turn to the government for assistance.  When you add it all up, about half of all Americans get money from the government each month these days.  And yes, there will always be poor people that cannot take care of themselves that need help, but when you have more than half of the population dependent on the government that is a major problem.  You see, the truth is that our independence is systematically being taken away from us and we are steadily being made serfs of the state.  And once you become a serf of the state, it is very hard to resist anything the government is doing in a meaningful way.  After all, the money that you are getting from the government is enabling you to survive.  In essence, your allegiance has been at least partially purchased and you may not even realize it.

Of course this is not how the United States was supposed to operate.  We were never intended to be a collectivist nation.  Rather, we were intended to be a country where liberty and freedom thrived and where most people would be able to independently take care of themselves.

Unfortunately, it is becoming increasingly difficult to be economically independent in America today.  One reason for this is that the environment for small businesses in this country is the most toxic that it has ever been before.  The federal government, our state governments and even our local governments are constantly coming up with new ways to oppress small business.

And just this week we learned that the IRS is specifically targeting small business owners and sending them threatening letters.

Yes, you read that correctly.  Despite all of the trouble that the IRS is currently in, they are still choosing to specifically go after small businesses with both barrels.  As a recent Forbes article explained, the IRS plans to send threatening letters to 20,000 small businesses all over the country:

This is absolutely disgusting, but it is just another example of how small business is being eradicated in the United States.  As I mentioned in a previous article, the percentage of Americans that are self-employed has dropped to a record low… 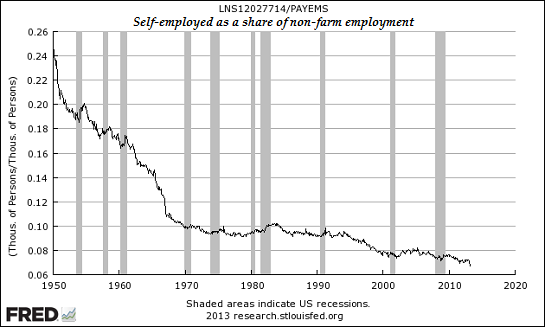 Well, at least we can achieve economic independence by getting a full-time job, right?

Sadly, that is becoming increasingly difficult to do as well.

The chart below was created by Chartist Friend from Pittsburgh, and it shows that the percentage of working age Americans with a full-time job dropped sharply to 47 percent during the last recession and it has stayed about that level ever since.  The yellow line is the line in the chart which demonstrates this… 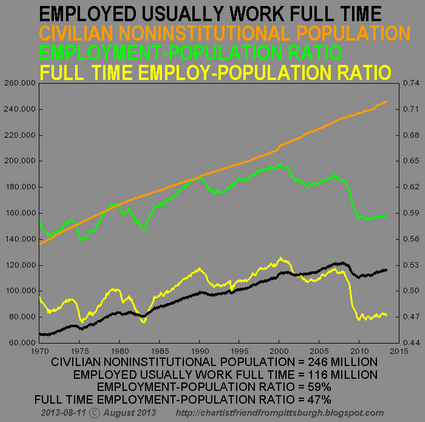 As you can see, we briefly touched that level in the 1970s and again briefly in the 1980s, but it is important to remember that the percentage of women that chose to seek employment was much lower back then.  When you take that into account, the current level of full-time employment in this country looks even worse.

The quality of jobs in this country has been steadily falling for quite some time, and we are rapidly transitioning to an economy where part-time employment will be much more prominent.

And right now, a higher percentage of Americans are economically dependent on the government than ever before.  The following is from a recent article by Charles Hugh-Smith…

Why? Because half of us are getting a direct check, benefit or payment from the state. Over 61 million people get a check from Social Security, over 50 million draw Medicare benefits, another 50 million get Medicaid benefits, 47 million receive SNAP food stamp benefits, 22 million people work directly for the state on all levels, millions more work for government contractors that are effectively proxies of the state, millions more receive Federally funded extended unemployment, retirement checks, Section 8 housing benefits, and so on.

Orwell underestimated the power of complicity. Once a citizen receives a direct payment from the state, the state has purchased their complicity, for no matter how much that citizen may complain privately about the state, he or she will never risk the payment/benefit by resisting the state in a politically meaningful way.

Once you get a check from the state, you begin loving your servitude. The collusion of the state and its central bank is truly a thing of authoritarian beauty: the central bank (the Federal Reserve) creates money out of thin air and buys government bonds with the new money. The state can thus borrow unlimited sums at low rates of interest, and continue to send tens of millions of individual payments out to buy the passivity and complicity of its citizens.

Of course the solution would be for our economy to produce more small businesses and more full-time jobs so that more people could achieve economic independence.

Sadly, right now our system is steadily killing full-time jobs and small businesses, and there does not appear to be any hope for a major turnaround any time soon.

At this point, the number of Americans that are financially dependent on the government is absolutely staggering, and it gets worse with each passing year.  Just consider the following statistics which come from one of my previous articles entitled “21 Facts About Rising Government Dependence In America That Will Blow Your Mind“…

3. Overall, more than 70 percent of all federal spending goes to “dependence-creating programs”.

4. According to the Survey of Income and Program Participation conducted by the U.S. Census, well over 100 million Americans are enrolled in at least one welfare program run by the federal government.  Sadly, that figure does not even include Social Security or Medicare.

5. Today, the federal government runs about 80 different “means-tested welfare programs”, and almost all of those programs have experienced substantial growth in recent years.

6. The number of Americans on Social Security disability now exceeds the entire population of the state of Virginia.

7. If the number of Americans on Social Security disability were gathered into a separate state, it would be the 8th largest state in the country.

9. Right now, there are approximately 56 million Americans collecting Social Security benefits.  By 2035, that number is projected to soar to an astounding 91 million.

10. Overall, the Social Security system is facing a 134 trillion dollar shortfall over the next 75 years.

11. The number of Americans on food stamps has grown from 17 million in the year 2000 to more than 47 million today.

13. Today, the number of Americans on food stamps exceeds the entire population of the nation of Spain.

15. According to a report from the Center for Immigration Studies, 43 percent of all immigrants that have been in the United States for at least 20 years are still on welfare.

20. The amount of money that the federal government gives directly to the American people has increased by 32 percent since Barack Obama entered the White House.

21. When you total it all up, American households are now receiving more money directly from the federal government than they are paying to the government in taxes.

Once again, there is certainly nothing wrong with helping the poor, and there will always be people that need a helping hand.

And once you are dependent on the system, at least part of you is going to become resistant to anyone or anything that threatens to bring meaningful change to the system because your survival depends on the system.

Or could I be wrong about this?