Never before has the world faced such a serious debt crisis.  Yes, in the past there have certainly been nations that have gotten into trouble with debt, but we have never had a situation where virtually all of the major powers around the globe were all drowning in debt at the same time.  And what makes this crisis even more unprecedented is that everyone on the planet is using fiat currency that is backed up by nothing.  It is all just a bunch of paper and data points that people have faith in.  Right now, confidence in this system is being shaken as debt levels skyrocket to extremely dangerous levels.  Many are openly wondering how much longer this can possibly go on.

Just consider what is going on over in Europe right now.  Even the countries that have supposedly “tried austerity” continue to rack up debt at a mind blowing pace.  New numbers that have just been released show that government debt to GDP ratios for some of the most financially troubled nations in Europe are absolutely soaring…

Meanwhile, the debt to GDP ratio in Japan is now well past the 200% mark and continues to march upward with no apparent end in sight.  The following is from a recent MSN article…

In Japan, the good news is that the nation’s budget for the fiscal year, which started on April 1, will see the government raise a higher percentage of spending from tax revenue than at any other time in the past four years. The bad news is that the government will still cover 46.3% of its spending from borrowing. The Organisation for Economic Cooperation and Development estimates that Japan’s budget deficit for 2013 amounted to 10.3% of gross domestic product.

In China, the big problem is the absolutely stunning growth of private domestic debt.  According to a recent World Bank report, the total amount of credit in China has risen from 9 trillion dollars in 2008 to 23 trillion dollars today.

That increase is roughly equivalent to the entire U.S. commercial banking system.

According to financial journalist Ambrose Evans-Pritchard, the ratio of private domestic debt to GDP in China is now wildly out of control…

The 160pc debt ratio for China is based on a conservative measure of credit. Fitch says it is 200pc if you count all offshore vehicles, trusts, letters of credit etc.

This morning China Securities Journal – an arm of the regulators – said it may really be 221pc.

Well, what about the United States?

As I noted the other day, our ratio of federal government debt to GDP has shot up like a rocket since 2008… 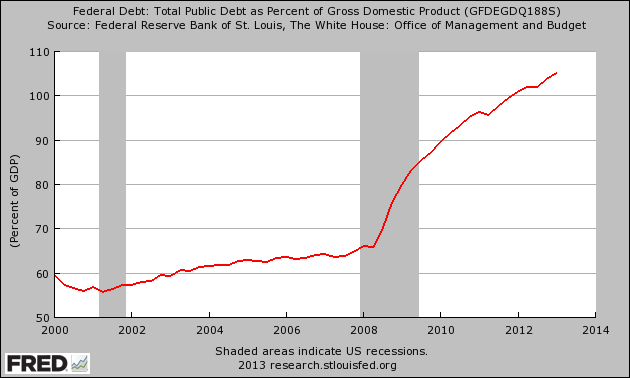 At this point, the U.S. already has more government debt per capita than Greece, Portugal, Italy, Ireland or Spain.  It is a giant mess, and yet our politicians continue to recklessly spend more money.

And of course state and local governments all over the nation are drowning in debt too.  The bankruptcy of Detroit is forcing people to come to grips with how bad things really are.  Sadly, as Meredith Whitney explained the other day, there are going to be a lot more municipal bankruptcies coming down the pipeline…

As jarring as the reality may be to accept, Detroit’s decision last week to declare bankruptcy should not be regarded as a one-off in the US municipal market – which is what the bond-peddlers are now telling their clients. The aftershocks of the largest municipal bankruptcy in US history will be staggering, and Detroit will set important precedents.

Municipal bankruptcies have historically been rare for a number of reasons – including the states’ determination to preserve their credit ratings, their access to cheap funding and the stigma of bankruptcy. But, these days, things are very different in the world of municipal finance.

At the root of the problem is the incentive system that elected officials used to face. For decades, across the US, local leaders ran up tabs for future taxpayers; they promised pensions and other benefits for public employees that have strong legal protection. That has been a great source of patronage for elected officials: they can promise all sorts of future perks to loyal supporters (state and local workers) with very little accountability on the delivery of those promises.

And of course the overall debt level in the United States continues to grow much, much faster than our overall economy is growing.

The greatest debt bubble in the history of the planet is still expanding.

How long will it be before it bursts?

That is a very good question.  For now, our “leaders” appear to just be trying to keep the party going for as long as possible.  They know that if they suddenly change course hard times will hit almost immediately.  For example, just check out what Federal Reserve Chairman Ben Bernanke told Congress last week…

With the economy still facing risks, especially from government spending cuts, Bernanke told a congressional panel on Wednesday the Fed is still planning to trim its quantitative easing stimulus, if growth continues at a steady pace.

But expectations that the Fed was poised to start tightening monetary policy, which have sent interest rates jumping and sparked turmoil in global markets, were unwarranted, he stressed.

“I don’t think the Fed can get interest rates up very much, because the economy is weak, inflation rates are low,” Bernanke told the House Financial Services Committee.

“If we were to tighten policy, the economy would tank.”

Nobody wants the economy to “tank”, but the truth is that the more debt that we run up, the larger our long-term economic problems become.

And a growing percentage of Americans realize that something has seriously gone wrong.  According to a recent Pew Research survey, 44% of all Americans believe that an economic recovery is still “a long way off“.

Unfortunately, the reality of the matter is that we are already living in the “economic recovery”.

This is about as good as it is going to get.

The truth is that the real storm has not even hit yet.  When the debt bubble finally bursts, we are going to see economic chaos in this country unlike anything that we have ever experienced before.

I hope that you are getting ready.

2 thoughts on “Debt Levels Are Skyrocketing To Extremely Dangerous Levels – How Long Can This Possibly Keep Going?”