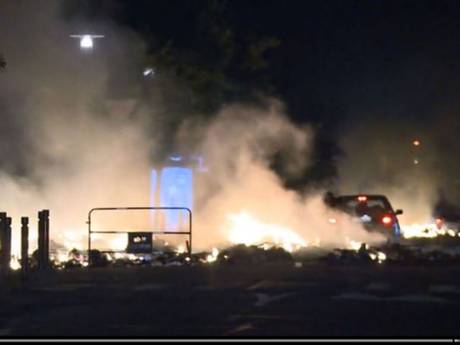 Twenty cars were burned and four people arrested early today in a second night of violence in a Paris suburb after allegedly heavy-handed police action to enforce France’s ban on the full-face Islamic veil.

Riot police were on patrol in the same suburb west of Paris this afternoon when a fire broke out in a disused furniture warehouse, but it was not immediately clear whether this had been started deliberately. Six young people were arrested in the suburb of Trappes on Friday night when 200 rioters besieged a local police station to protest against police violence. A 14-year-old boy suffered a serious eye injury.

Interior Minister Manuel Valls appealed for calm. Community leaders said that the riots were a response to the frequent violence and insulting language used by police, rather than a protest against the two-year-old law banning burkas or other full-face coverings.

On the second night of protest about 50 young people burned cars and threw Molotov cocktails at riot police. Both sides agree the protests began when a three-man police patrol stopped a young woman wearing  a face veil on Friday night. The woman’s mother and husband became  involved in an argument with the officers.

Police say the older woman rammed one officer with a pushchair, and her husband punched another and then tried to throttle him.

According to the other woman, named as Cassandra B, 20, the officers pushed her mother and then grabbed her by the veil and pushed her over the bonnet of a car. Trappes was the childhood home of the former Arsenal and France footballer Nicolas Anelka and the actor and comedian Jamel Debbouze.

“Do you think this started with just one arrest which went bad?” a 30-year-old man said to Le Monde. “It’s the whole atmosphere of Trappes which makes us want to revolt.”