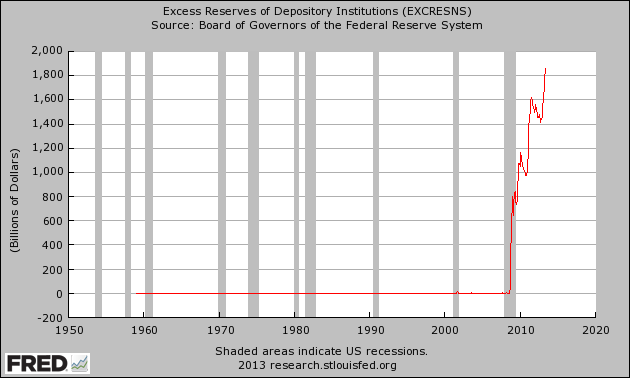 This explains why all of the crazy money printing that the Fed has been doing has not caused tremendous inflation yet.  Most of the money has not even gotten into the economy.  The Fed has been paying banks not to lend it out.

But now that big pile of money is sitting out there, and at some point it is going to come pouring in to the U.S. economy.  When that happens, we could very well see an absolutely massive tsunami of inflation.

Posted below is a chart that shows the growth of the M2 money supply over the past several decades.  It has been fairly steady, but imagine what would happen if you took the hockey stick from the chart above and suddenly added it to the top of this one… 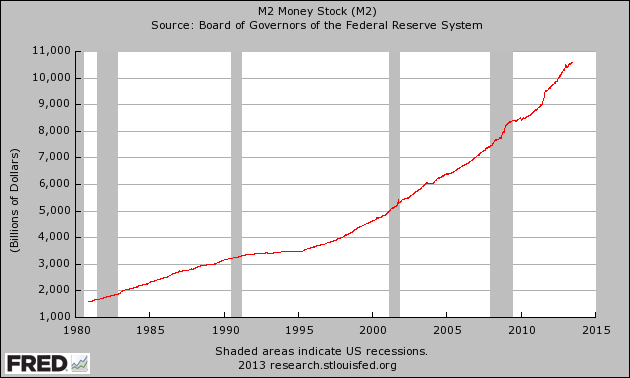 The longer that the Federal Reserve continues to engage in quantitative easing and continues to pay banks not to lend that money out to the rest of us, the larger that inflationary time bomb is going to become.

In a recent article for the Huffington Post, Professor Robert Auerbach of the University of Texas explained the nightmarish situation that we are facing…

One reason that the excess reserves grew to an extraordinary level is that in October 2008, one month after the financial crisis when Lehman Brothers went bankrupt, the Bernanke Fed began paying interest on bank reserves. Although it has been 1/4 of 1 percent interest, this risk free rate was not low compared to the Fed’s policy of keeping short-term market rates near zero. The interest banks received was and is an incentive to hold the excess reserves rather than lend to consumers and businesses in the risky environment of the major recession and the slow recovery.

The Bernanke Fed is now facing a $1.863 trillion time bomb, they helped to create, of excess reserves in the private banking system. If rates of interest on income earning assets (including bank loans to consumers and businesses) rise, the Fed will have to pay the banks more interest to hold their excess reserves.

If interest rates move up dramatically (and they are already starting to rise significantly), banks will have an incentive to take that money out of the Fed and start lending it out.  Professor Auerbach suggests that this could cause an “avalanche” of money pouring into the economy…

Eighty five billion a month will seem tiny compared to the avalanche of the $1.863 trillion excess reserves exploding rapidly into the economy. That would devalue the currency, cause more rapid inflation and worry investors about a coming collapse.

So the Fed has kind of painted itself into a corner.  If the Fed keeps printing money, they continue to grossly distort our financial system even more and the excess reserves time bomb just keeps getting bigger and bigger.

But even the suggestion that the Fed would begin to start “tapering” quantitative easing caused the financial markets to throw an epic temper tantrum in recent weeks.  Interest rates immediately began to skyrocket and Fed officials did their best to try to settle everyone down.

So where do we go from here?

Unfortunately, as Jim Rogers recently explained, this massive experiment in financial manipulation is ultimately going to end in disaster…

I’m afraid that in the end, we’re all going to suffer perhaps, worse than we ever have, with inflation, currency turmoil, and higher interest rates.

The Fed and other global central banks have created the largest bond bubble in the history of the planet.  If the Fed ends quantitative easing, the bond market is going to try to revert to normal.

That would be disastrous for the global financial system.  The following is what Jim Willie told Greg Hunter of USAWatchdog.com…

Everything is dependent on Fed support. They know if they take it away, they’re going to create a black hole. The Treasury bond is the greatest asset bubble in history. It’s at least twice as large as the housing and mortgage bubble, maybe three or four times as large.

But even if the central banks keep printing money, they may not be able to maintain control over the bond market.  In fact, there are already signs that they are starting to lose control.  The following is what billionaire Eric Sprott told King World News the other day…

It’s total orchestration. And it’s orchestration because they might have lost control of the bond market. I find it such a juxtaposition that central banks on a daily basis buy more bonds today than they ever purchased, and interest rates are going up, which is almost perverted. I mean how can that happen?

They’ve lost control of the market in my mind, and that’s why they are so desperately trying to get us all to forget the word ‘taper.’ In fact, we probably won’t even hear the word ‘taper’ anymore because it has such a sickening reaction to people in the bond market, and perhaps even people in the stock market. They will probably do away with the word. But the system is totally out of control. And then we’ve got this quadrillion dollars of derivatives. It just blows blows my mind to think about what could really be going on behind the scenes.

Sprott made a really good point about derivatives.

The quadrillion dollar derivatives bubble could bring down the global financial system at any time.

We are moving into a time of great financial instability.  People are going to be absolutely shocked by what happens.

Our financial system is a house of cards built on a foundation of risk, leverage and debt.  When it all comes tumbling down, it should not be a surprise to any of us.