About a month ago I asked What If Stocks, Bonds and Housing All Go Down Together? (May 24, 2013). Why would such an outrageous thought even occur to me?
Four words: financialization, debtocracy, diminishing returns. The entire global economy, developed and developing nations alike, is now dependent on cheap, abundant credit for everything: for “growth,” for asset inflation, and ultimately for central state deficit spending, which props up all the cartels, rentier arrangements, fiefdoms and armies of toadies, lackeys, apparatchiks and embezzlers that suck off the Status Quo.
I have long endeavored to explain the harsh reality of neofeudal, neocolonial financialization: Neofeudalism and the Neocolonial-Financialization Model (May 24, 2012) and the neofeudal debtocracy that depends on low yields (interest rates) to enable enormous deficit spending: Why Krugman and the Keynesians Are Lackeys for the Neofeudal Debtocracy (April 24, 2013).
The wheels fall off the entire financialized debtocracy wagon once yields rise.There’s nothing mysterious about this:
1. As interest rates/yields rise, all the existing bonds paying next to nothing plummet in market value
2. As mortgage rates rise, there’s nobody left who can afford Housing Bubble 2.0 prices, so home prices fall off a cliff
3. Once you can get 5+% yield on cash again, few people are willing to risk capital in the equities markets in the hopes that they can earn more than 5% yield before the next crash wipes out 40% of their equity
4. As asset classes decline, lenders are wary of loaning money against these assets; if the collateral for the loan (real estate, bonds, stocks, etc.) are in a waterfall decline, no sane lender will risk capital on a bet that the collateral will be sufficient to cover losses should the borrower default.

Here is a chart of mortgage rates since 1970. Rates were pushed to 17+% to snuff inflation in the early 1980s, and they’ve dropped over the past 30 years to historic lows: the rate for a fixed-rate 30-year conventional mortgage was about 3.5% a few weeks ago. It has now risen above 4%. 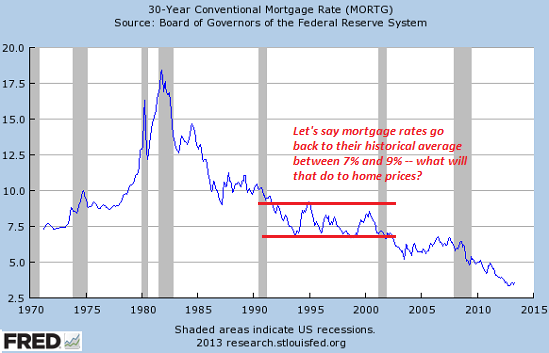 In other words, in eras of strong growth and low inflation, mortgage rates have been around 7% to 9%. So what happens to the monthly payments when the mortgage rate doubles from 4% to 8%? The payments double, too. And what happens to the price of houses when rates double? They fall to the point that households borrowing money at 7.5% – 8% can afford to buy a house, i.e. a price much lower than today’s Housing Bubble 2.0 prices.

Here’s mortgage debt. If mortgage debt had expanded at the previous rate, total debt would be closer to $5 trillion instead of $10 trillion. 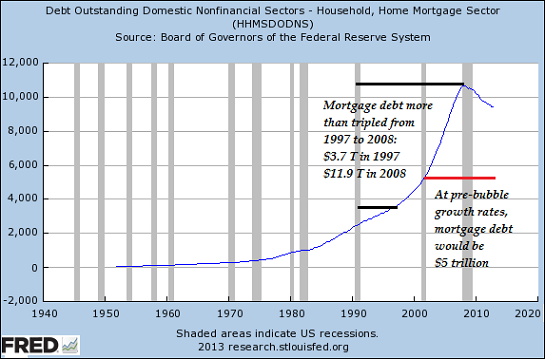 You see what happens when debt becomes cheap and abundant: debt rises faster than wages or assets.
But hasn’t household wealth increased mightily in the past decades? Here is a chart that plots the relationship of household net worth and total credit owed, i.e. debt: 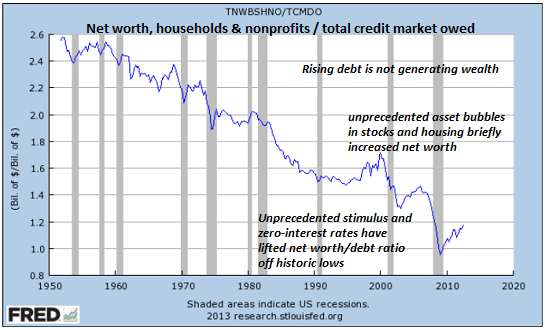 Household wealth may be rising, but what this chart reveals is debt is rising even faster–that’s why the line is declining. Put another way, every dollar of new debt is generating less and less wealth.

You might think that The Federal Reserve’s policy of making credit cheap and abundant would goose people to consume and invest more money. Alas, the velocity of money is hitting historic lows: the Fed may be creating credit but people and enterprises aren’t putting that money into circulation. 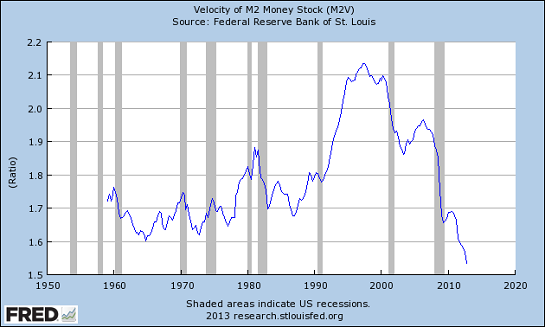 It’s called diminishing returns: every dollar of debt creates interest payments, but it’s no longer doing households or enterprises any good. The Fatal Disease of the Status Quo: Diminishing Returns (May 1, 2013).

That’s why all asset classes that depend on cheap, abundant credit are doomed: once yields/rates rise, the valuations of those assets implode. And once valuations implode, there’s not enough collateral left to support the loans used buy all those cheap-credit-inflated assets. So the financial system also implodes.