ZeroHedge’s Tyler Durden comments on this …

The espionage scandal that keeps on giving has released its latest installment, once more courtesy of the Guardian, which on the eve of tomorrow’s starting G-8 meeting reveals that foreign politicians and officials who took part in two G-20 summit meetings in London in 2009 had their computers monitored, their phone calls intercepted, and fake internet cafes were set up on the instructions of the British Government Communications Headquarters (GCHQ), the sister organization to the US NSA.Naturally, it wasn’t just the GCHQ – according to the Guardian, during the 2009 G-20 meeting there was an NSA attempt to eavesdrop on then-Russian leader, Dmitry Medvedev, as his phone calls passed through satellite links to Moscow.

And while broad espionage allegations can be deflected by pretending by the rhetoric-endowed and teleprompter-aided that only terrorist threats were targeted, it will be very difficult to explain why the national information super spooks used every trick of the trade to spy on the so-called leaders of the developed world.

And like that, one more conspiracy theory is relegated to the “fact” bin, as those using the “tin foil, crack-pot conspiracy theorists” fallback, are slowly becoming the biggest laughing stock in town.

So who gave the green light for this blatant spying operation, which assuredly takes place at every meeting of the world’s leading political (and other) dignitaries? Why that supreme gold top-tick timer himself, Gordon Brown:

There have often been rumours of this kind of espionage at international conferences, but it is highly unusual for hard evidence to confirm it and spell out the detail. The evidence is contained in documents – classified as top secret – which were uncovered by the NSA whistleblower Edward Snowden and seen by the Guardian. They reveal that during G20 meetings in April and September 2009 GCHQ used what one document calls “ground-breaking intelligence capabilities” to intercept the communications of visiting delegations.

The timing of today’s release comes at a perfect time, just as yet another G-8 meeting is due to commence shortly in the UK:

What else did the revealed G-20 spying consist of:

It just goes downhill from there:

A briefing paper dated 20 January 2009 records advice given by GCHQ
officials to their director, Sir Iain Lobban, who was planning to meet
the then foreign secretary, David Miliband. The officials summarised
Brown’s aims for the meeting of G20 heads of state due to begin on 2
April, which was attempting to deal with the economic aftermath of the
2008 banking crisis. The briefing paper added: “The GCHQ intent is to
ensure that intelligence relevant to HMG’s desired outcomes for its
presidency of the G20 reaches customers at the right time and in a form
which allows them to make full use of it.” Two documents explicitly
refer to the intelligence product being passed to “ministers”. 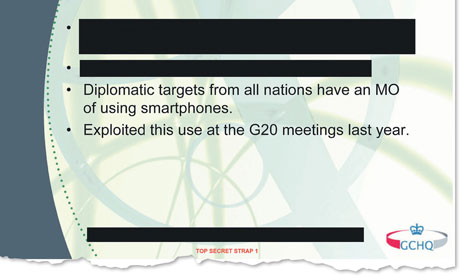 According to the material seen by the Guardian, GCHQ generated this
product by attacking both the computers and the telephones of delegates.

Most importantly, the bullshit excuse that spying by the GCHQ and the NSA, was being done to safeguard the safety and security of “the people” will no longer fly. And if anything, the latest set of disclosures should generate a diplomatic scandal of unprecedented proportions. Alas, in a world in which everyone is broke and reliant on the goodwill of the Fed, and by implication, the Fed’s code breakers, the NSA, we wouldn’t be surprised if nothing happens.

Other documents record apparently successful efforts to penetrate the security of BlackBerry smartphones: “New converged events capabilities against BlackBerry provided advance copies of G20 briefings to ministers … Diplomatic targets from all nations have an MO of using smartphones. Exploited this use at the G20 meetings last year.”

The operation appears to have run for at least six months. One document records that in March 2009 – the month before the heads of state meeting – GCHQ was working on an official requirement to “deliver a live dynamically updating graph of telephony call records for target G20 delegates … and continuing until G20 (2 April).”

Another document records that when G20 finance ministers met in London in September, GCHQ again took advantage of the occasion to spy on delegates, identifying the Turkish finance minister, Mehmet Simsek, as a target and listing 15 other junior ministers and officials in his delegation as “possible targets”. As with the other G20 spying, there is no suggestion that Simsek and his party were involved in any kind of criminal offence. The document explicitly records a political objective – “to establish Turkey’s position on agreements from the April London summit” and their “willingness (or not) to co-operate with the rest of the G20 nations”.

The September meeting of finance ministers was also the subject of a new technique to provide a live report on any telephone call made by delegates and to display all of the activity on a graphic which was projected on to the 15-sq-metre video wall of GCHQ’s operations centre as well as on to the screens of 45 specialist analysts who were monitoring the delegates.

“For the first time, analysts had a live picture of who was talking to who that updated constantly and automatically,” according to an internal review.

A second review implies that the analysts’ findings were being relayed rapidly to British representatives in the G20 meetings, a negotiating advantage of which their allies and opposite numbers may not have been aware: “In a live situation such as this, intelligence received may be used to influence events on the ground taking place just minutes or hours later. This means that it is not sufficient to mine call records afterwards – real-time tip-off is essential.”

The surveillance got so far as reading people’s emails at the same time as they typed!

One document refers to a tactic which was “used a lot in recent UK conference, eg G20”. The tactic, which is identified by an internal codeword which the Guardian is not revealing, is defined in an internal glossary as “active collection against an email account that acquires mail messages without removing them from the remote server”. A PowerPoint slide explains that this means “reading people’s email before/as they do”.

In the week after the September meeting, a group of analysts sent an internal message to the GCHQ section which had organised this live monitoring: “Thank you very much for getting the application ready for the G20 finance meeting last weekend … The call records activity pilot was very successful and was well received as a current indicator of delegate activity …

“It proved useful to note which nation delegation was active during the moments before, during and after the summit. All in all, a very successful weekend with the delegation telephony plot.”

And now we go back to your regularly scheduled prime-time soap opera tragicomedy for idiots, in which the protagonists read from teleprompters advising the same idiots, that only terrorist suspects are targeted by the totalitarian superstate, and that no matter what, one should trust the government – after all they are only here to help you.