Klein, 64, was a retired AT&T communications technician in December 2005, when he read the New York Times story that blew the lid off the Bush administration’s warrantless wiretapping program. Secretly authorized in 2002, the program lets the U.S. National Security Agency (NSA) monitor telephone conversations and e-mail messages of people inside the U.S. to identify suspected terrorists. Klein knew right away that he had proof — documents from his time at AT&T — that could provide a snapshot of how the program was siphoning data off of the AT&T network in San Francisco.

Amazingly, however, nobody wanted to hear his story. In his book he talks about meetings with reporters and privacy groups that went nowhere until a fateful January 20, 2006, meeting with Kevin Bankston of the Electronic Frontier Foundation (EFF). Bankston was preparing a lawsuit that he hoped would put a stop to the wiretap program, and Klein was just the kind of witness the EFF was looking for.

With the EFF on board, Klein was briefly a media celebrity — the man who had the guts to expose the NSA’s secret wiretapping program. In his book he provides the documents and the stories that illustrate how all of this transpired.

Klein has been politically active since the 1960s, when he protested the Vietnam war. “I came to view the government with great suspicion like a lot of people back then and I still do,” he said in an interview he granted the IDG News service on Friday. “I guess that sort of laid the groundwork for my later experience, because I didn’t trust the government to begin with.”

Today he lives in the San Francisco Bay Area with his wife, Linda, and his two dogs. He self-published his book last week.

Following is an edited transcript of the interview.

IDG News Service: By some estimates there are 15 to 20 of these secret wiretapping rooms across the country. You’re the only AT&T employee who has come forward and talked about them in detail. Why?

Mark Klein: Fear. First of all it was a scary time. It still is a scary time, but during the Bush years it was sort of a witch hunt atmosphere and people were afraid. People are afraid of losing their jobs, and it’s a rule of thumb that if you become a whistleblower you’ll probably lose your job. And if you have a security clearance, you not only lose your job, but you probably will be prosecuted by the government. The Bush administration made that very clear in statements they made over and over again: ‘Anybody who reveals anything about our secret programs will be prosecuted and we are running investigations to find out who leaked this to the New York Times.’ Well that puts a fear in people.

IDGNS: Have you heard from other AT&T employees who told you that they knew of these activities?

Klein: I haven’t tried to get in contact with people I knew at AT&T for this very reason. I didn’t want to jeopardize their livelihood.

IDGNS: In your book you describe how a meeting with your lawyer was videotaped to preserve evidence in case you “disappeared.” How scared were you?

Klein: I was very worried. The Bush administration was capable of very crazy things and illegal things. I knew they were doing torture. And I knew they had taken into custody and jailed people who were citizens of the United States … and just thrown them away in a brig with no trial and no charges. So I didn’t think it was beyond the possibility that they’d do the same to me. Maybe I was getting a little paranoid in hindsight, but hindsight is cheap.

I was most worried at the time when the LA Times was killing my story, but at the same time the LA Times showed it to the government. Then I really was panicking because that meant that the government knew everything and probably knew my name, but I didn’t have any publicity.

IDGNS: The media merit a full chapter (entitled: ‘Going Public vs. Media Chickens’) in your book. What happened there?

Klein: The LA Times was particularly egregious because they were planning a front-page spread. They were the first entity I’d given all the documents to. Then they talked to the government about it, and it turned out they were talking to not only the NSA director, but the director of national intelligence, who was John Negroponte at the time. So that meant the government knew it. And then a few weeks later the LA Times killed the story. So the only thing you can read into is that basically the government squashed the story. [The LA Times’ editor in early 2006, Dean Baquet, said the government had nothing to do with the decision. ‘We did not have a story, that we could not figure out what was going on,’ he told ABC News — ed.]

IDGNS: How long did they have the story?

Klein: I started dealing with them in late January 2006, and in February they showed it to the government, and then they started wobbling. By the end of March 2006, they officially told me the story was killed.

IDGNS: Did they cover it in April, after it became public?

Klein: No that was funny. After it finally hit the news everywhere else, The LA Times didn’t run with the stuff I’d given them. They’d squashed the whole thing.

IDGNS: A lot of people you might have expected to be interested in this story weren’t interested initially. In the book, you talk about going to EPIC [the Electronic Privacy Information Center] and getting nowhere; you talk about the media and you also talk about Congress. You never testified before Congress.

Klein: This book has several aspects. The first aspect is the spying itself and the technical apparatus; another aspect is the role of the media and how the media has basically functioned as a propaganda apparatus for the government, more or less willingly. Part of the book is about the struggle to make the media cover this story. And the third part of this story is about Congress. It was a struggle, a struggle which failed I might add, to get Congress to investigate and do something about this. Congress ran away from me. They didn’t want to touch me with a 10-foot pole, starting with my own senator, Dianne Feinstein, who was a key member of both the Intelligence Committee in the Senate and the Judiciary Committee. She was one of the first legislators I tried to contact in February 2006. I was given the number of her chief attorney in Washington, and he first was very interested. He talked to me on the phone and asked me a bunch of detailed questions and told me he’d get back to me. And then I never heard from him again.

IDGNS: Why do you think you had trouble getting Congress interested?

Klein: With the Republicans, it’s obvious why they didn’t want to deal with it. Their administration was responsible for the whole illegal spying operation. The first layer of the Democratic party leadership, it turns out, had been knowledgeable and briefed on this program and was complicit, in my view.

IDGNS: What do you think you’ve accomplished by coming forward with these documents?

Klein: My main accomplishment is to let everybody know about what exactly the government is doing to people. How the government in detail is screwing over people’s privacy and trampling over the Constitution and the Fourth Amendment, and lay out in great detail how everybody’s personal lives are being delved into by the government and stored in secret databases for future reference. 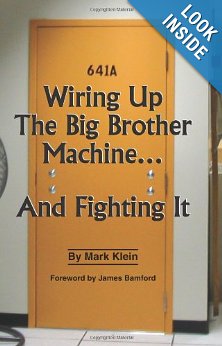 @Amazon.com: Wiring Up The Big Brother Machine…And Fighting It

1 thought on “Why Is MSM So Busy Reporting On The NSA’s Secret Wiretapping Program NOW, When It Ignored The Story YEARS AGO???”