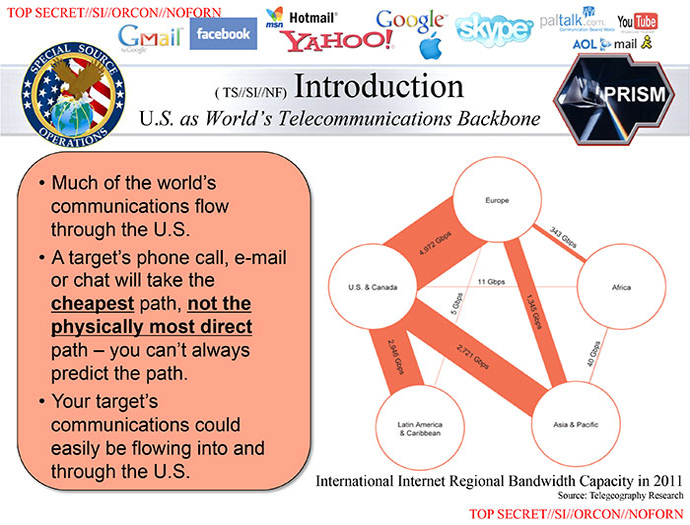 Apple, Google and Facebook made public statements on Thursday that they either had never heard of, or have not complied with PRISM by giving the program direct access to their servers.

“From time to time, people allege that we have created a govt. ‘back door’ into our systems, but Google does not have a ‘back door’,” a Google representative told CNBC.

“We have never heard of PRISM. We do not provide any government agency with direct access to our servers,” responded Apple.

In the disclosed documents, the NSA lauds PRISM program as “one of the most valuable, unique and productive accesses for NSA.” 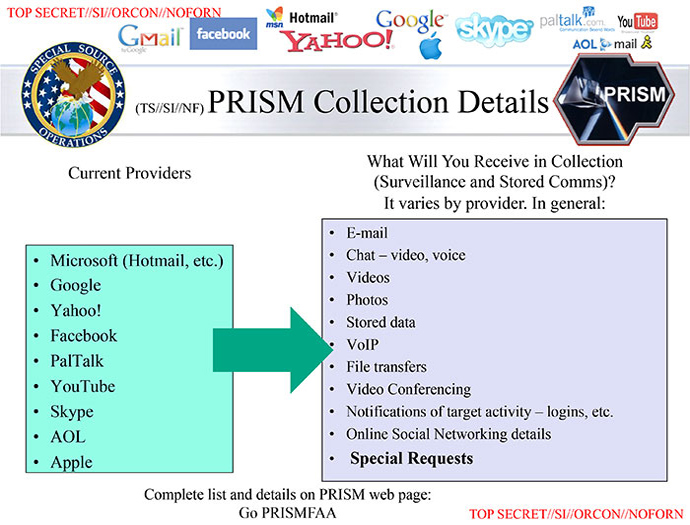 The presentation, which is described as internal and intended for senior analysts within the NSA’s Signals Intelligence Directorate, describes PRISM as the most prolific contribution to President Obama’s Daily Brief – that key report cited PRISM data in 1,477 articles in 2012.

According to the Washington Post, PRISM’s raw material accounts for nearly 1 in 7 intelligence reports.

The presentation files further boast of “strong growth” in PRISM’s reach, noting the number of obtained online communications increased by 248% in 2012 for Skype alone with “exponential growth in Skype reporting.” “Looks like the word is getting out about our capability against Skype,” boasts the report.

Requests made via PRISM by US intelligence in 2012 are quoted as having increased by 131% for Facebook data, and by 63% for Google. 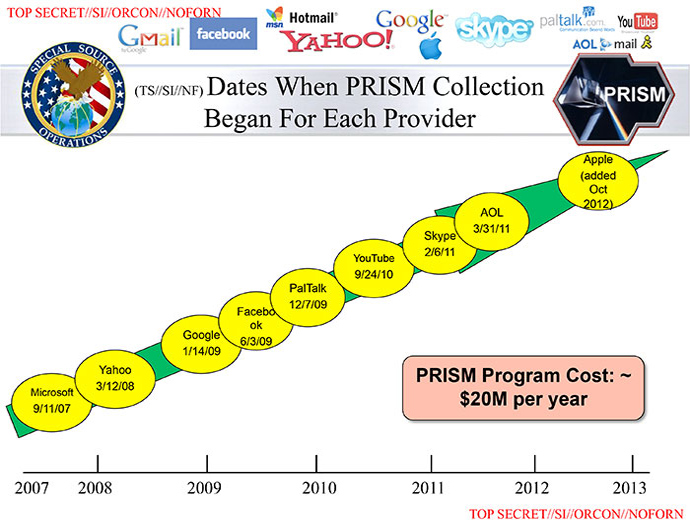 According to The Guardian’s report, when the NSA reviews a communication it believes calls for further investigation, it can then issue what it calls a “report.” According to the NSA, “over 2,000 PRISM-based reports” are now issued every month, representing a 27% increase since last year.

Online privacy advocates seemed to struggle in responding to the scale of the divulged PRISM program. Jameel Jaffer, the director of the ACLU’s Center for Democracy who spoke with The Guardian, said that it was astonishing the NSA would directly ask technology companies to grant access to user data.

“It’s shocking enough just that the NSA is asking companies to do this. The NSA is part of the military. The military has been granted unprecedented access to civilian communications,” says Jaffer.

“This is unprecedented militarisation of domestic communications infrastructure. That’s profoundly troubling to anyone who is concerned about that separation,” he added.

In short, PRISM allows for deep, in-depth surveillance over both live and stored online communications. The program also allows the intelligence community to target any customer of a participating company, within or outside of the US.