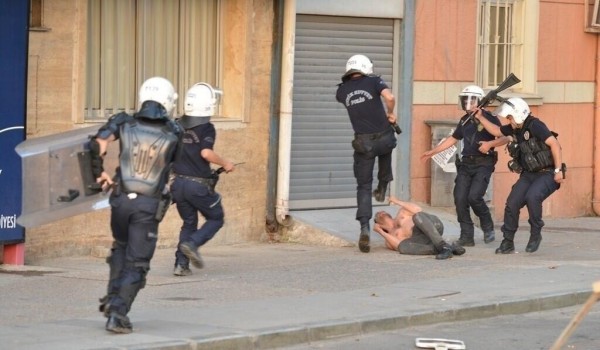 – Turkey’s Prime Minister: “There is a Now a Menace Which is Called Twitter” (Liberty Blitzkrieg, June 3, 2013):

You know a government is losing it when its leaders express public frustration with a social media website called Twitter.  I highlighted how the Saudi government recently had a panic attack about it, saying users would go to hell. Now, in the midst of a widespread uprising that began when Turks protesting the razing of a park in Istanbul near Taksim Square to build a mall and mosque were attacked by police, Prime Minister Tayyip Erdogan is showing his true colors.  It is quite obvious that the government’s reason for wanting to tear down the park is to eliminate the most obvious staging ground for future protests in the center of Istanbul.  Oh the irony.

ISTANBUL (AP) — Turkey’s prime minister on Sunday rejected claims that he is a “dictator,” dismissing protesters as an extremist fringe, even as thousands returned to the landmark Istanbul square that has become the site of the fiercest anti-government outburst in years.

Over the past three days, protesters around the country have unleashed pent-up resentment against Recep Tayyip Erdogan, who after 10 years in office many Turks see as an uncompromising figure with undue influence in every part of life.

A huge, exuberant protest in Taksim Square subsided overnight, but an estimated 10,000 people again streamed into the area on Sunday, many waving flags, chanting “victory, victory, victory” and calling on Erdogan’s government to resign.

With Turkish media otherwise giving scant reports about the protests, many turned to social media outlets for information on the unrest.

“There is now a menace which is called Twitter,” Erdogan said. “The best examples of lies can be found there. To me, social media is the worst menace to society.”

The reason these clowns all hate Twitter so much is because it is an extremely efficient way for people to communicate with one another, spread real time information via pictures and livestream video, as well as a tool for people all over the world help the Turkish people get around government internet crackdowns.  Basically, they can’t control the information flow.

The demonstrations were ignited on Friday by a violent police crackdown on a peaceful sit-in to prevent the uprooting of trees at Taksim Square in Istanbul and have since spread around the country. The Turkish Doctors Association said the three days of demonstrations have left 1,000 people injured in Istanbul and 700 in Ankara.

An Associated Press reporter saw at least eight injured people being carried away, and police appeared to directly target journalists with tear gas.

Finally, here is an interesting video that has gone viral that attempts to explain the underlying reasons for the protests.