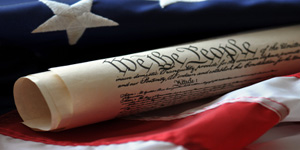 The state of Texas continues to fight back hard against federal intrusions, especially in the area of gun control as President Obama and some Washington lawmakers push for new laws infringing upon the Second Amendment’s right of Americans to keep and bear arms.

In a vote of 100-47, the Texas House recently approved a bill aimed at stopping new federal laws and regulations concerning firearms within the state’s boundaries. The legislation, HB 1076, introduced by Rep. Steve Toth, a Republican, would require that Texas refuse to enforce any new gun control laws or regulations enacted after Jan. 1, 2013:

An entity described by Subsection (a) may not adopt a rule, order, ordinance, or policy under which the entity enforces, or by consistent action allows the enforcement of, a federal statute, order, rule or regulation enacted on or after January 1, 2013 that purports to regulate a firearm, firearm accessory, or firearm ammunition if the statute, order, rule or regulation imposes a prohibition, restriction or other regulation, such as capacity or size limitation, a registration requirement or a background check, that does not exist under the laws of this state.

‘You will not cooperate’

Gun rights advocates in the state have applauded the measure, saying it would serve as a bulwark against future erosions of the Second Amendment within Texas. What’s more, many are pointing to recent comments by Fox News legal analyst and contributor Judge Andrew Napolitano that such widespread noncompliance with new federal gun control statutes would make them “nearly impossible to enforce.”

He noted that while states could not legally interfere with the duties of federal law enforcement officials, those same federal agents need state and local assistance in order to carry out their duties – and if the state and local authorities are forbidden from providing such assistance, enforcing new gun laws would be tough.

“Our home state of New Jersey could not, for example, use the police to frustrate federal law enforcement. What it could say to state and local police (is) ‘you will not cooperate.’ That will make federal enforcement of tighter federal gun laws nearly impossible,” he said on Fox News.

Per the Tenth Amendment Center, a states’ rights group:

And in those limited situations where enforcement does occur, Rosa Parks has taught us all the power of “NO!” Quite simply, the federal government absolutely cannot enforce gun control in Texas without the help of Texas.

“Passage of HB1076 would mark the beginning of the end of new federal gun control measures in Texas,” said the center’s executive director, Michael Boldin.

The group said an additional piece of legislation that was based on similar principles, HB 928, was passed recently following a second reading in the Texas House. Like HB 1076, it, too, would require the state to abandon enforcement of federal gun laws, but it does not establish a time frame.

“In other words,” said the center, “all federal gun control measures currently on the books would be included along with any new ones, as covered by HB1076.

Movement to protect the Constitution spreading

There are other states considering similar legislation that either prohibits state law enforcement officials from enforcing federal gun control laws or nullifies them completely:

In April, Kansas Gov. Sam Brownback signed legislation that essentially cancels out any future federal attempt to regulate guns or impose new gun control measures and restrictions in a move seen by supporters as protecting the integrity of the Second Amendment and Kansans’ right to bear arms without government infringement. Brownback’s signature on the law has drawn the ire of Attorney General Eric Holder, who has written the governor to warn him the Justice Department may sue Kansas to get the law struck down, an action Brownback says he welcomes.

Montana began the trend with a measure called the “Firearms Freedom Act,” a law that is currently winding its way through the federal U.S. 9th Circuit Court of Appeals, which heard arguments in March.

Since Montana passed its law, several other states – including Arizona, Wyoming, South Dakota, Utah and Tennessee – have modeled legislation after it.