Three days ago, in an article that looked at the convergence of 3-D printing and the 2nd Amendment, we presented “the Liberator” – the world’s first fully 3-D printed firearm. The name was aptly chosen because courtesy of its creator, 25-year old UofT law student Cody Wilson, and his non-profit group Defense Distributed, its online blueprint and assembly instructions liberated “anyone to be able to download and print a gun with no serial number, in the privacy of their garage” in effect completely circumventing any gun control/distribution laws, background checks and other regulatory hurdles of an increasingly authoritarian government. In fact, we were counting the number of days before some US Federal agency would come knocking on Cody Wilson’s door and involved that other key Amendment – the First, by either “disappearing him” or politely enforcing a permanent Cease and Desist of all production, including, of course, the removal of all online “liberating” blueprints. We didn’t have long to wait – it took just one week. 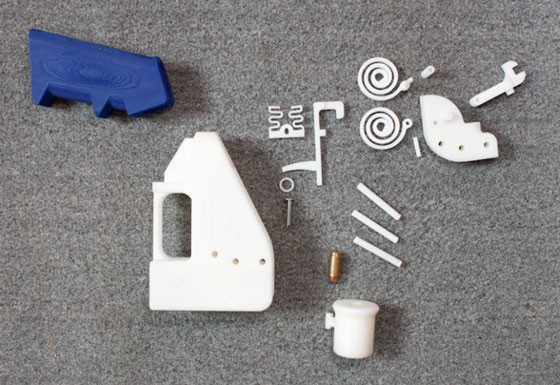 As Tech Crunch reports, “the State Department has demanded that new blueprints for a fully 3-D-printed gun be taken offline just a week after they were posted. The Office of Defense Trade Controls Compliance is forcing outspoken Second Amendment crusader Cody Wilson to remove the downloadable 3-D printer files from Defcad.org under expert laws known as the International Traffic in Arms Regulations (ITAR).”

Specifically, the Dept of State claims that under “ITAR, it is unlawful to export any defense article or technical data for which a license or written approval is required without first obtaining the required authorization from the DDTC. Please note that disclosing (including oral or visual disclosure) or transferring technical data to a foreign person, whether in the United States or abroad, is considered an expoert under [ ] ITAR.” And since by implication this means that all the data can be seen by at least one foreigner, “this means that all such data should be removed from public access immediately.”

Naturally, Cody would be stupid to fight the US government on this one, which is why he won’t. “We have to comply” he told Forbes.

However, courtesy of the magic of the internet, taking down his files does nothing for the some 100,000 downloads of the entire blueprint set, distributed among various nodes, and are now held, in one instance, in Kim Dotcom’s offshore New Zealand servers, where not even the long hand of John Kerry can reach. And just as a backup, the files have also been uploaded to the decentralized bittorrent database, Pirate Bay.

More interesting will be whether the PGP case study of anti-Big Brother retaliation applies in the Liberator case. As TechCrunch explains:

According to Forbes’ Andy Greenberg, Wilson sees parallels between his strife and the governments abandoned attempts at censoring military-grade encryption software. In the 1990s inventor Phil Zimmermann released software, PGP, so difficult to crack that it could have permitted malicious actors from hiding information from law enforcement. Wilson believes public pressure ultimately convinced the government to back off of Zimmermann.

It’ll be interesting to see whether the government has any actual power to prevent the propagation of 3-D gun blueprints.

Since the libertarian community is quite adept at bypassing the tyranny of an encroaching despot, it has already made the pre-banned files widely available to anyone who wishes to access them. The links, courtesy of SHTFplan.com, are below:

Finally, as a warning to those who wish to take the Federal government head on in what appears to be its attempt to regulate decentralized gun creation, SHTFplan also presents the following warning.

An administrator at the DefCad forums posted the following warning regarding the government’s takedown and the current status of The Liberator and 3D firearms based on its plans:

I’ll be bringing in legal authority and FAQ, but for now, if you are not a registered FFL/SOT:

DO NOT print a completely polymer firearm capable of firing a bullet (barrel inserts or no), as you will likely violate the so-called Undetectable Firearms Act.

Not listening to items 1 and 2 means you are on your way to committing a Federal crime. Because of the public profile and interest over this kind of activity at the moment, you WILL be made an example of. You WILL go to federal prison, and you WILL never be able to own a firearm again.

The full State Department Letter, signed by Glenn Smith, Chief of the Enforcement Division, demanding the removal of the 3D gun blueprints is presented below.