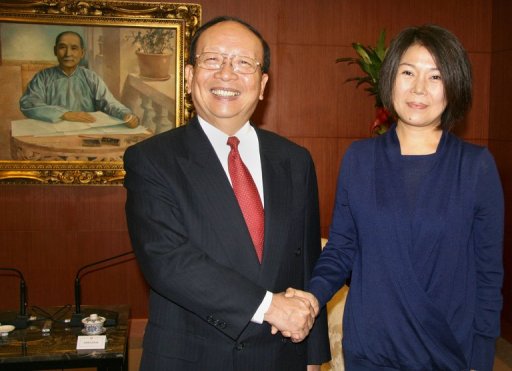 – Communism For Some, $815 Million For Others: How Mao’s Granddaughter “Greatly Leapt Forward” To Untold Riches (ZeroHedge, May 9, 2013):

For a country, whose founder Chairman Mao once upon a time envisioned great wealth equality for all and a communist utopia, things sure have had a very capitalist ending. Perhaps nowhere is this more visible than in Mao’s lineage itself, where we find that the granddaughter of Mao, Kong Dongmei, managed to rise above the great unwashed mass of egalitarianism, and ended up just slightly more equal as a result of the Great Leap Forward, with a personal fortune amounting to $815 million according to New Fortune, a Chinese financial magazine. But it is not so much the realization that the occupation of politics is one grand lie (second perhaps only to economics) and where preaching equality for all is merely a means to achieve great wealth for yourself, but that the 40 year old descendant of the Chairman, with her wealth of nearly $1 billion, is merely the 242nd richest person in China, which means there are over 200 billionaires in the country, the bulk of whom we can only imagine are descendants of the original “communist” founders of the country.

Kong is the grand-daughter of Mao and his third wife He Zizhen. In 2001 she founded a book store in Beijing selling publications about Mao and promoting “Red Culture” after studying at the University of Pennsylvania in the US.

In 2011, Kong married Chen, who controls an insurance company, an auction house and a courier firm, after they had maintained an extramarital relationship for 15 years, according to the magazine, which cited other Chinese media reports.

The couple have two daughters and a son, said New Fortune — likely to be a violation of China’s one-child policy.

The locals, attuned to flagrant examples of hypocrisy, were not exactly delighted with the revelation:

Kong’s inclusion on the rich list triggered hot debate on China’s Twitter-like weibos, with some accusing her of betraying her grandfather’s status as the “great teacher of proletariat revolution”.

“The offspring of Chairman Mao, who led us to eradicate private ownership, married a capitalist and violated the family planning policy to give birth to three illegal children,” wrote Luo Chongmin, a government advisor in southwest China.

China has implemented the one-child policy for many urban residents for over 30 years, although there have been recent suggestions that the rules may be loosened.

“Did Kong Dongmei… pay any fines after being a mistress for more than 10 years and giving birth to three kids?” asked another user with the online handle Virtual Liangshao.

Yes, and a bundler for the president in another non-crony capitalist country is in prison for commingling client funds before blowing up his firm as a result of his greedy bets. Oh wait…

But at least Kong was not caught trying to hide her wealth offshore like some of her uber-wealthy peers in a country in which parking one’s cash has become the biggest priority. And lots of cash to park there is. According to China Daily, “Privately held wealth on the Chinese mainland hit 80 trillion yuan ($13 trillion) in 2012, with more than 700,000 individuals now holding 10 million yuan or more in investable assets, more than double the number at the end of 2008, according to a new report.” In US terms, this means the number of millionaires has doubled under 350,000 during the course of the great financial crisis, once again showing that not even China is willing to let a crisis go to waste.

The findings, from China Merchants Bank and US-based management consulting firm, Bain & Co, showed that the richest on the mainland are stepping up their investment in foreign assets as they try to preserve their fortunes in the face of uncertain economic prospects.

Many of those surveyed said they are becoming increasingly concerned by potential changes in Chinese regulatory policies, financial market volatility and other business risks.

About 60 percent of respondents indicated they were now focused on preserving their wealth, against using it to make more.
Chen Kunde, wealth management business director at China Merchants Bank, said the shift in priority was being driven by uncertainties over economic growth.

“As the rich gradually age and their knowledge changes, they are tending to focus more on preserving the wealth instead of fighting to create more, in a business environment where it is becoming more difficult to make extra money.”

Where do the wealthy want to stash the cash?

On top of cash holdings in traditional bank accounts, individuals said they had a strong interest in forming family trusts, and in creating a diversified portfolio of international interests to preserve their wealth and spread the risk, said the report, with more than half having overseas investments.

Jennifer Zeng, a Bain partner in Beijing and a co-author of the report, said: “We don’t see a great difference between high-net-worth individuals in China and other countries when it comes to their goals, although the situation here is changing and the shift toward the preservation of wealth might accelerate as the speed at which the wealth was created was faster than in most parts of the world.”

The report said that Chinese banks had strengthened their position in the domestic wealth management market, while foreign banks had a much lower share of the market due to business restrictions.

It said the need for overseas asset allocation among the rich is rising, and China’s banks should be encouraged to develop overseas business models and accelerate overseas expansion, to better cater to that rising demand.

Our advice: stay away from banks susceptible to bail-ins. So anywhere in Europe.

As for the great wealth disparity forming between both China, and the rest of the world’s, uber rich, and everyone else, a similar divergence developed in 18th century France with less than hospitable consequences for the wealthiest. This time will not be different.

The only delaying factor is the presence of the great welfare state myth, which has so far kept the great unwashed in their place, not so much through violent oppression, but through the illusion of how much they stand to lose if they overthrow the system that provides for them, and hands them crumbs in times of needs. The same system that is now and always has been, an insolvent ponzi scheme which will last only as long as the new entrants put in more than existing members take out.

That equilibrium, however, is rapidly changing all around the globe, as more and more realize, voluntarily or otherwise, that the system is broke, and with the great debt creation apparatus now hinging purely on the world’s central banks, the days of the ponzi are numbered.

2 thoughts on “Communism For Some, $815 Million For Others: How Mao’s Granddaughter ‘Greatly Leapt Forward’ To Untold Riches”