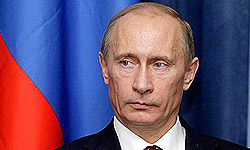 – Russia Not to Tolerate Further Israeli Attacks on Damascus (FARS News Agency, May 7, 2013):

TEHRAN (FNA)- Israeli Prime Minister Binyamin Netanyahu, while in Shanghai, was given a sharp dressing-down by Russian President Vladimir Putin, a warning that Russia would not tolerate further Israeli attacks on Damascus and would respond.

Since Syrian air defense teams have already trained in Russia on the handling of the S-300 interceptor batteries, they can go into service as soon as they are landed by one of Russia’s daily airlifts to Syria. Russian air defense officials will supervise their deployment and prepare them for operation.

Moscow is retaliating not just for Israel’s air operations against Syria but in anticipation of the Obama administration’s impending decision to send the first US arms shipments to the Syrian rebels.

Intelligence agencies in Moscow and the Middle-East take it for granted that by the time Washington goes public on this decision, some of the Syrian rebel factions will already be armed with American weapons.

That the measure was in the works was signified by the introduction Monday by chairman of the US Senate Foreign Relations Committee Bob Menendez of legislation allowing the US to provide arms and military training to the Syrian rebels.

US military instructors have been working with Syrian rebels at training camps in Jordan and Turkey for some months. So putting the arms in their hands only awaited a decision in Washington, the Israeli website alleged.

Putin’s message to Netanyahu was intended to reach a wider audience than Jerusalem, such as Barack Obama in Washington and President Xi Jinping in Beijing ahead of Netanyahu’s talks there Tuesday.

6 thoughts on “Putin: Russia Will Not Tolerate Another Israeli Attack On Syria And Would Respond”