Citizens in Syria’s capital woke up early on Sunday to a series of powerful explosions shaking the outskirts of Damascus, sending massive fireballs into the night sky. Preliminary reports that this was an Israeli attack were subsequently confirmed by NBC citing a senior US official who said Israeli jets had bombed a military research center near of Damascus. This would be the second Israeli attack on Syrian territory in the past week, following US media reports that Israel targeted a weapons shipment to the militant group Hezbollah in neighboring Lebanon overnight Thursday to Friday, although the Jewish state has refused to confirm or deny the bombing. As RT further reports, during the attack, one Israeli jet was reportedly shot down by Syria’s Air Force, according to Hezbollah’s Manar TV channel, citing security sources in Damascus. This has yet to be confirmed through official channels although if accurate one expects Syrian media to promptly confirm with video evidence.

Video coverage of tonight’s bombing has already appeared on Youtube:

Israel declined to comment on the attack, but the blasts occurred a day after an Israeli official said his country had carried out an air strike targeting a consignment of missiles in Syria intended for the Lebanese militant group Hezbollah.

One of the sites hit on Sunday, the Jamraya military research centre, was also targeted by Israel in January.

“The new Israeli attack is an attempt to raise the morale of the terrorist groups which have been reeling from strikes by our noble army,” Syrian television said, referring to recent offensives by President Bashar al-Assad’s forces against rebels.

The British-based Syrian Observatory for Human Rights quoted eyewitnesses in the area as saying they saw jets in the sky at the time of the explosions.

It said the blasts hit Jamraya as well as a nearby ammunition depot. Other activists said a missile brigade and two Republican Guard battalions may also have been targeted in the heavily militarised area just north of Damascus.

According to AFP, the previous attack destroyed surface-to-air missiles recently delivered by Russia that were being stored at Damascus airport, and would be delivered to Hezbollah in Lebanon. Stratfor adds the following perspective:

Israeli officials have privately stressed that Israel maintains its own specific redlines in the Syrian conflict and that despite U.S. President Barack Obama’s reported stance, the use of chemical weapons against rebels is not one of them. Specifically, Israeli officials have stressed that they will not tolerate transfers of chemical weapons, ballistic missiles, advanced air-defense systems or sophisticated anti-ship missiles to Hezbollah — or jihadist seizures of such weapons.

Over the past months, the Syrian regime has also effectively withdrawn its forces from the Golan Heights in order to use them against the rebel threat encroaching on Damascus. This has heightened Israeli concern that jihadists will take advantage of the security vacuum in the Golan Heights to begin staging attacks against Israeli units in the area. Israel has said such action will not be tolerated.

Countries near Syria are already feeling the effects of the war. A massive influx of refugees is adding further stress to the already unstable economies of Lebanon and Jordan, and earlier this week a Turkish guard was killed in a border dispute with armed Syrians. Iraq is seeing increased jihadist activity linked to the Syrian conflict. As the conflict in Syria continues to rage, the spillover effects from the civil war will continue to manifest themselves.

It was not immediately known what the “defensive” purpose of tonight’s offensive was, which supposedly targeted a military research base, nor was it clear if Syria will ultimately declare a state of war with Israel following the past week’s dramatic escalation in hostilities.

Most importantly, it is not known if following last week’s provocative language out of the White House if this is precisely the event sought by the Obama administration to finally give the green light to a joint military operation targeting Syria.

The last question is how Russia responds, whether it remains neutral, or comes to the support of president Assad and defends its military naval assets on the Syrian coast.

While speculation a US-led escalation is ripe, the lack of any US naval support (as shown by Stratfor’s naval update map from May 2) off the coast of Syria likely makes any immediate war is hardly likely, or that Israel will be on its own for at least the foreseeable future. 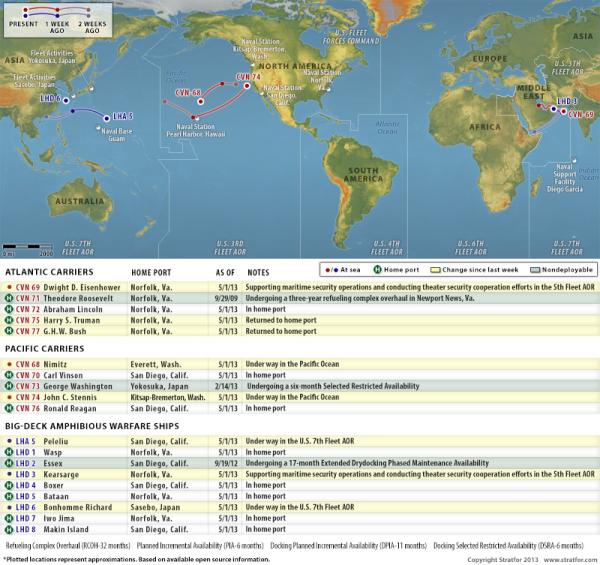