I told you when Bilderberg Josef Ackerman left Deutsche that things will get very interesting soon enough .

– At $72.8 Trillion, Presenting The Bank With The Biggest Derivative Exposure In The World (Hint: Not JPMorgan) (ZeroHedge, April 29, 2013):

Moments ago the market jeered the announcement of DB’s 10% equity dilution, promptly followed by cheering its early earnings announcement which was a “beat” on the topline, despite some weakness in sales and trading and an increase in bad debt provisions (which at €354MM on total loans of €399.9 BN net of a tiny €4.863 BN in loan loss allowance will have to go higher. Much higher). Ironically both events are complete noise in the grand scheme of things. Because something far more interesting can be found on page 87 of the company’s 2012 financial report.

The thing in question is the company’s self-reported total gross notional derivative exposure.

And while the vast majority of readers may be left with the impression that JPMorgan’s mindboggling $69.5 trillion in gross notional derivative exposure as of Q4 2012 may be the largest in the world, they would be surprised to learn that that is not the case. In fact, the bank with the single largest derivative exposure is not located in the US at all, but in the heart of Europe, and its name, as some may have guessed by now, is Deutsche Bank. 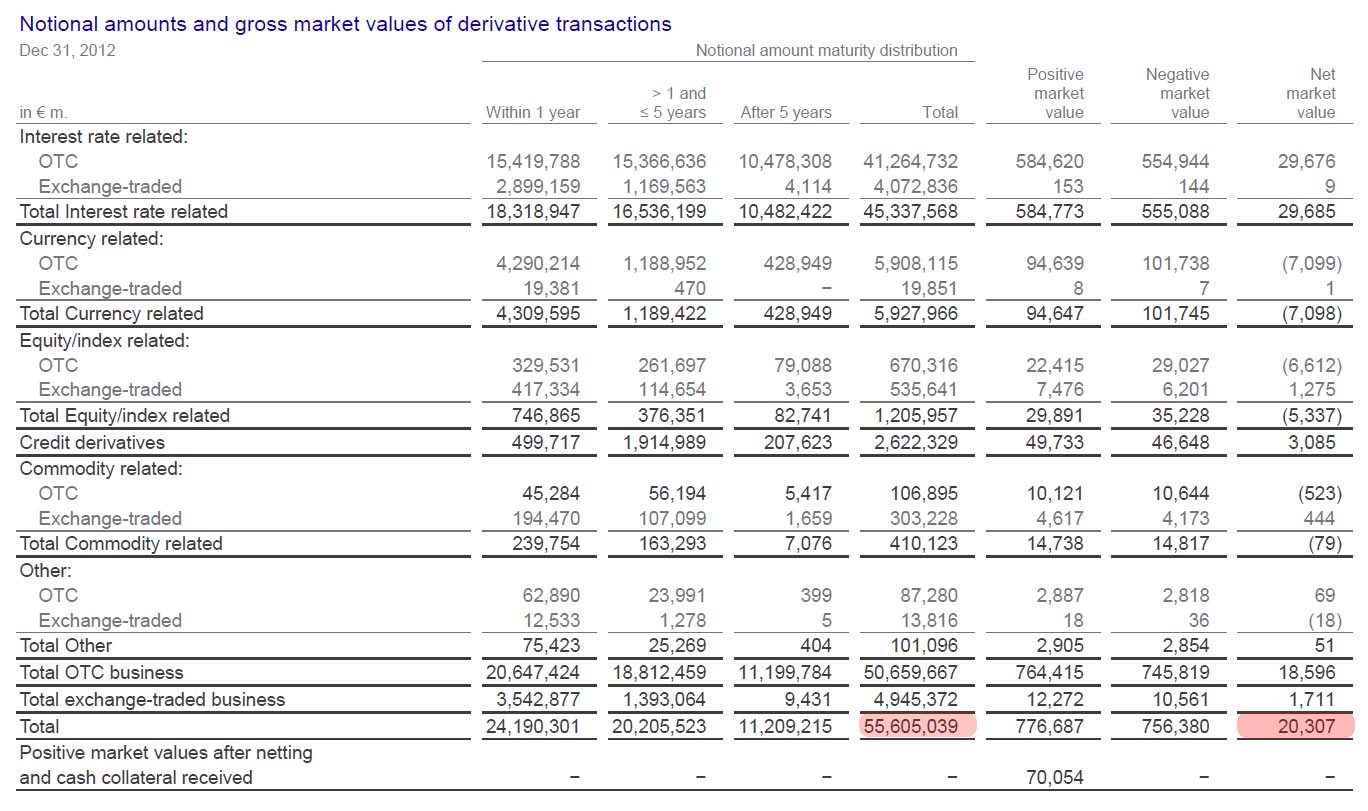 The good news for Deutsche Bank’s accountants and shareholders, and for Germany’s spinmasters, is that through the magic of netting, this number collapses into €776.7 billion in positive market value exposure (assets), and €756.4 billion in negative market value exposure (liabilities), both of which are the single largest asset and liability line item in the firm’s €2 trillion balance sheet mind you, and subsequently collapses even further into a “tidy little package” number of just €20.3.

Of course, this works in theory, however in practice the theory falls apart the second there is discontinuity in the collateral chain as we have shown repeatedly in thh past, and not only does the €20.3 billion number promptly cease to represent anything real, but the netted derivative exposure even promptlier become the gross number, somewhere north of $70 trillion.

Which, of course, is the primary reason why Germany, theatrically kicking and screaming for the past four years, has done everything in its power, even “yielding” to the ECB, to make sure there is no domino-like collapse of European banks, which would most certainly precipitate just the kind of collateral chain breakage and net-to-gross conversion that is what causes Anshu Jain, and every other bank CEO, to wake up drenched in sweat every night.

Finally, just to keep it all in perspective, below is a chart showing Germany’s GDP compared to Deutsche Bank’s total derivative exposure. If nothing else, it should make clear, once and for all, just who is truly calling the Mutually Assured Destruction shots in Europe. 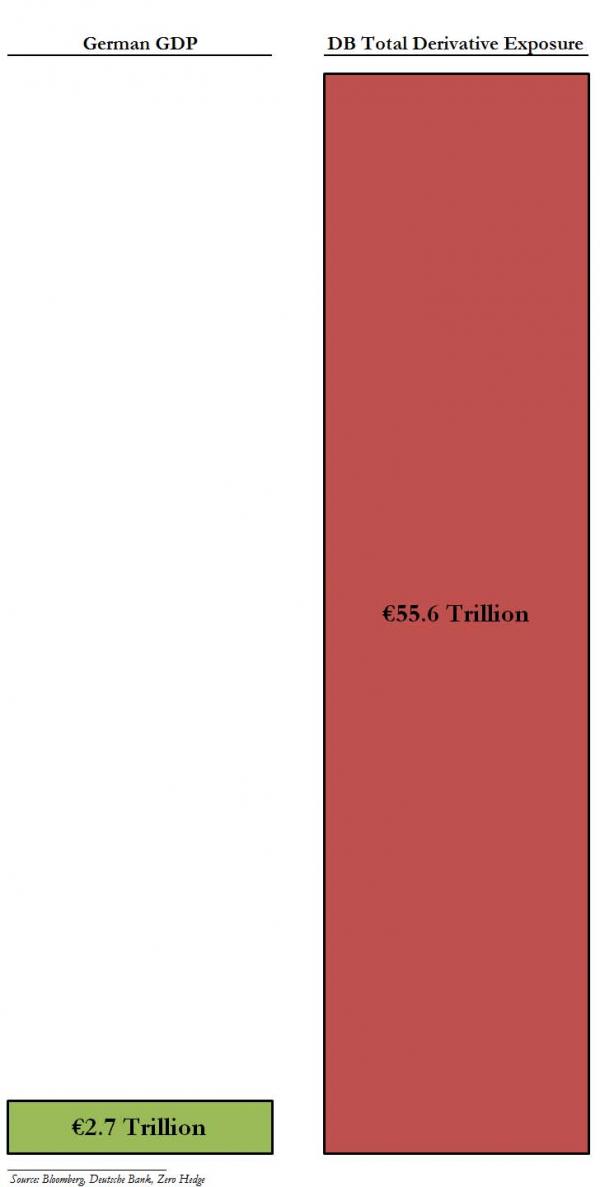 But don’t worry, this €56 trillion in exposure, should everything go really, really bad is backed by the more than equitable €575.2 billion in deposits, or just 100 times less. Of course, a slighly more aggresive than normal bail-in may be required in case DB itself has to followin the footsteps of Cyprus…

1 thought on “At $72.8 TRILLION Presenting The Bank With The Biggest Derivative Exposure In The World (Hint: Not JPMorgan)”