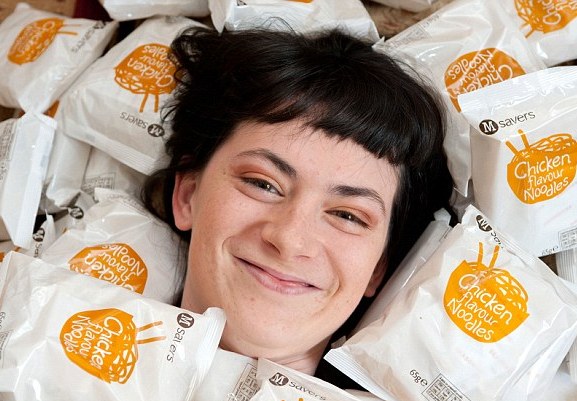 Since she was about five years old, Georgi Readman from the Isle of Wight in the U.K. has been eating primarily ramen noodles and nothing more for virtually every meal. And now the 18-year-old girl is suffering the health consequences, as reports indicate that her persistent aversion to fruit and vegetables has rendered her severely malnourished and about as healthy as an average 80-year-old.

It all began when Georgi first savored the artificial flavors and salt chemicals laced in a packet of ramen noodles when she was a child. She almost immediately decided that ramen noodles were her food of choice, and gradually phased out all other foods, including nourishing foods like whole fruit and vegetables. Today, she eats ramen noodles for almost every meal, even though it has caused her quite a few problems both bodily and socially.

“I hate the texture of fruit and vegetables,” says Georgi, as quoted by the New York Daily News (NYDN). “I can’t go to my friends’ for dinner or go out for meals because I don’t want them to see me freak out if the side salad touches the stuff I eat.”

Some experts believe Georgi suffers from a relatively novel health condition known as selective eating disorder, which causes a person to literally have a phobia about eating certain foods. For Georgi, she says she actually feels sickly when she tries to eat other foods besides ramen, and can only occasionally eat a potato or piece of chicken.

“I just love noodles,” she says. “Mum goes to the supermarket and brings back as many packets as she can. I always fancy noodles and I’ve eaten them uncooked.”

During a recent doctor visit, practitioners actually thought Georgi had leukemia because of her weak frame and frail appearance. Weighing in at a mere 98 pounds, the five-foot, three-inch girl was also determined to be severely malnourished, and doctors say she has the approximate health of an 80-year-old person, which is a serious cause for concern at her young age.

“Without it, this girl has probably suffered stunted growth and IQ, osteoporosis, heart and kidney damage, and high blood pressure. Her lifespan has likely been shortened as well. Kids would eat ice cream every day if they could but it’s the parents’ responsibility to broaden their palates, introducing various foods and textures to them.”

If Georgi continues on with her current eating patterns, experts says she will only get worse, And unfortunately, to change her dismal dietary lifestyle this late in the game will likely take a major mental and physical intervention, including both hospitalization and extensive education in nutrition.