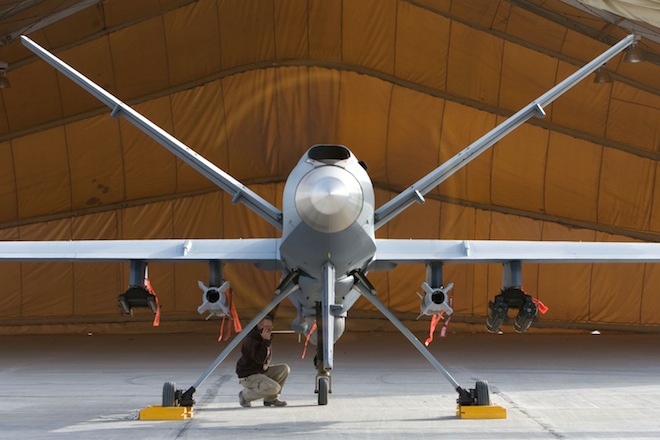 Armed MQ-9 Reaper drones, like this one in Afghanistan, will remain in Afghanistan’s skies even after the U.S.’ longest war formally ends in 2014. Photo: U.S. Air Force

One of the major elements of Afghanistan’s air war will remain after most U.S. troops have headed home, the U.S. military command confirmed today. Armed drones, operated by the U.S., will remain over Afghanistan after 2014.

“I come back to the remotely piloted aircraft,” Air Force Maj. Gen. H.D. Polumbo, the commander of the U.S./NATO air war over Afghanistan, told reporters at the Pentagon today. “They can collect intelligence, but they also are armed. And they’re armed to be able to provide force protection to our coalition forces and then when our coalition ground force commanders, when they deem it appropriate, they can control that air-delivered munition capability from the RPAs to be put in support of the Afghans.”

The drones will not be the only air support available to the Afghan army after 2014, when most U.S. forces are slated to leave Afghanistan. But only “some fixed wing” manned fighters and bombers will remain on the battlefield, Polumbo said. Navy jets flown off of nearby aircraft carriers and Air Force planes flown from Gulf airbases will supplement them when the Afghans’ small supply of Mi-17 and Mi-35 attack helicopters, and their forthcoming Super Tucano planes, are overwhelmed.

And the drones will remain. “You’ll have that hybrid ISR [intelligence, surveillance and reconnaissance] as I call it, that armed ISR, remotely piloted aircraft capability all the way through ’14,” Polumbo said, “and then once [the follow-on Operation] Resolute Support mission and operations is fully understood and agreed upon by our coalition partners and our leadership, you will likely see it into 2015 to provide force protection.”

Polumbo did not mention the use of armed drones flown from Afghanistan over the border into Pakistan after 2014. Western Pakistan, the epicenter of the U.S. drone war from 2009 to 2011, experienced a surge in U.S. drone strikes at the beginning of this year. Those drones are under the control of the CIA, and U.S. military officials believe that’s likely to remain the case even if the Obama administration takes away many of the CIA’s drone operations, since there is no declared U.S. war in Pakistan. Those drones are flown from Afghanistan.

The Afghanistan war is the central battlefield for the U.S. drone campaign. In 2012, U.S. drones above Afghanistan fired their missiles 447 times, a vastly greater barrage than existed in Pakistan, Yemen, Somalia or anywhere else U.S. drones strike. But the military recently purged drone strike data for the Afghanistan from its public websites, part of a recent trend in opacity as the war winds down.

One of the reasons the drones will stay above Afghanistan: right now, Polumbo said, the Afghan army lacks aircraft for close air support during firefights with the Taliban. (They also lack their own spy drones, although the U.S. recently agreed to sell them those.) It’ll take years before the Afghans are trained on the Super Tucanos, expected to arrive in Afghanistan next year. And the Afghans’ capability for conducting air assault missions with their own helicopter fleet is also minuscule, as only a “small percentage” of air assault missions come from Afghan forces without U.S. support. Right now, Polumbo said, the U.S. only provides its own fixed-wing air support to Afghans in “the most significant or dire of circumstances,” as a major mission of U.S. forces now is to sponsor Afghan independence.

But the post-2014 drones, Polumbo explained, will not be operated by the Afghans. They’ll remain under the control of U.S. military officials, and most likely piloted thousands of miles away at Air Force bases in Nevada and New Mexico. That supposedly postwar U.S. force, after 2014, will have one thing in common with the force of today: it’ll rely significantly on flying, lethal robots.