Don’t expect to read much more about this: we live in a world in which hundreds dead thousands of miles away is an out of sight, out of mind statistic, while the capture of one 19 year old deranged youth is cause of edge of your seat realty TV drama and entertainment. 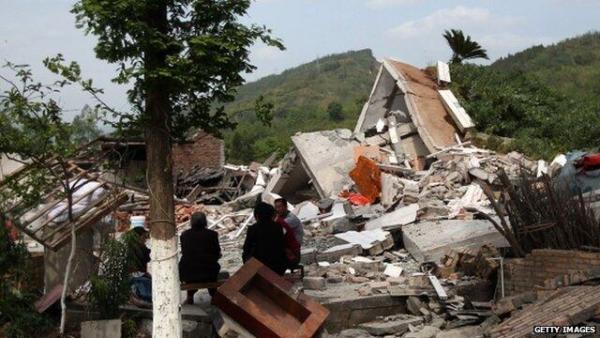 In all the jubilation last night following the capture of the 19 year terrorism suspect, virtually everyone missed news that a massive 7.0 magnitude quake according to the China Earthquake Administration (and 6.6 according to the USGS including countless aftershocks) hit China’s Sichuan province, leaving at least 156 dead and over 2200 injured according to the latest estimate from Xinhua. The epicenter was not too far from the infamous earthquake five years ago when 70,000 people died, and millions were left homeless as a result. The earthquake occurred at 8.02 a.m. (0002 GMT) in Lushan county near Ya’an city and the epicentre had a depth of 12 km (7.5 miles), the U.S. Geological Survey said. The quake was felt by residents in neighbouring provinces and in the provincial capital of Chengdu, causing many people to rush out of buildings, according to accounts on China’s Twitter-like Sina Weibo microblogging service.

Rescuers are struggling to get through to the worst-affected areas because of aftershocks and landslides.

Tens of thousands were killed in a quake that hit Sichuan in 2008.

Its epicentre was in a rural area some 115km (70 miles) west of provincial capital Chengdu, according to the US Geological Survey (USGS).

One injured man told the channel: “We still live in our old house, the new one is not ready yet. Our house just collapsed. Everything collapsed.”

The quake was measured at 12km below the surface, a shallow depth that usually indicates extensive damage.

Aerial shots of Lushan showed buildings collapsed or without roofs. 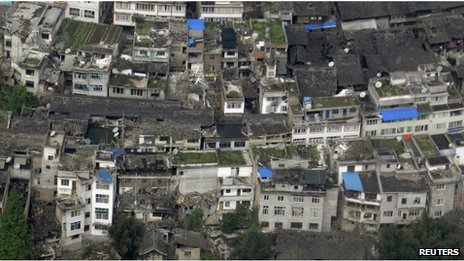 Power has been lost in the area, water supplies have been cut and telephone lines are also down.

People in Chengdu felt the tremor and came running into the streets wrapped in blankets.

Chengdu resident Aaron Ozment told the BBC there was huge confusion in the city.

“I threw on a some clothes quickly and made my way into the courtyard of my complex,” he said.

“Making calls was almost impossible; everybody was trying to contact everybody they knew.”

Residents in the nearest city to the epicentre, Ya’an, felt jolts from the quake and aftershocks, but the city does not appear to have suffered major damage.

State news agency Xinhua said more than 6,000 soldiers had been despatched to help with rescue efforts.

Premier Li Keqiang is travelling to Sichuan to oversee the operation.

“The current most urgent issue is grasping the first 24 hours since the quake’s occurrence, the golden time for saving lives,” Mr Li was quoted as saying by Xinhua.

Don’t expect to read much more about this: we live in a world in which hundreds dead thousands of miles away is an out of sight, out of mind statistic, while the capture of one 19 year old deranged youth is cause of edge of your seat realty TV drama and entertainment.

As for China, following the toxic Beijing smog blanket, the animal apocalypse and the bird flu breakout, an onslaught of earthquakes somehow did seem as a logical next step.