One more domino in the dollar reserve supremacy regime falls. Following the announcement two weeks ago that “Australia And China will Enable Direct Currency Convertibility“, which in turn was the culmination of two years of Yuan internationalization efforts as summarized by the following: “World’s Second (China) And Third Largest (Japan) Economies To Bypass Dollar, Engage In Direct Currency Trade“, “China, Russia Drop Dollar In Bilateral Trade“, “China And Iran To Bypass Dollar, Plan Oil Barter System“, “India and Japan sign new $15bn currency swap agreement“, “Iran, Russia Replace Dollar With Rial, Ruble in Trade, Fars Says“, “India Joins Asian Dollar Exclusion Zone, Will Transact With Iran In Rupees“, and “The USD Trap Is Closing: Dollar Exclusion Zone Crosses The Pacific As Brazil Signs China Currency Swap“, China has now launched yet another feeler to see what the apetite toward its currency is, this time in the heart of the Eurozone: Paris. According to China Daily, as reported by Reuters, “France intends to set up a currency swap line with China to make Paris a major offshore yuan trading hub in Europe, competing against London.” As a reminder the BOE and the PBOC announced a currency swap line back in February, in effect linking up the CNY to the GBP. Now it is the EUR’s turn.

More on this curious move by the Bank of France and the PBOC from Reuters:

“The Bank of France has been working on ways to develop a RMB liquidity safety net in the euro area with due consideration of a supporting currency swap agreement with the People’s Bank of China,” Noyer told the English-language newspaper.

The yuan’s internationalization and bilateral financial cooperation could be among the main topics during French President Francois Hollande’s visit to China in late April, the paper said.

The planned swap line would be the latest in a string of bilateral currency agreements that China has signed in the past three years to promote use of the yuan in trade and investment.

It followed a similar step by the Bank of England to set up a reciprocal three-year yuan-sterling swap line with China.

It appears that France may be a far more strategic European hub for China than London:

In 2011 and 2012, the total value of offshore yuan-denominated bonds issued by French corporates was nearly 7 billion yuan, twice the value of bonds issued by their British counterparts, according to a report by Paris Europlace, an association that supports the French financial industry and promotes Paris as an international financial center.

A survey by the association, the China Daily reported, also showed that 50 percent of French companies have used yuan-denominated products and services.

European and U.S. officials have for years been pressing China to do more to open up the yuan to international markets, saying its artificial weakness was one of the key imbalances of the global economy.

Sadly, the last sentence is dead wrong. The question why China has been scrambling to internationalize the CNY has nothing to do with succumbing to Western demands at reflating its currency to appreciate it and thus to push its current account even lower in the country with the shallowest stock market and the most bank deposits (i.e., most prone to sudden, abrupt bursts of inflation), nearly double those of the US, and everything to do with preparing the world for the “final monetarism frontier”, which will take place when the BOJ’s reflation experiment fails, and last remaining source (at least before Africa, but that is the topic for another day) of credit formation – the PBOC – finally ramps up.

As we pointed out a few days ago when we discussed the accelerating Chinese credit impulse and its soaring 240% debt-to-GDP ratio:

What should become obvious is that in order to maintain its unprecedented (if declining) growth rate, China has to inject ever greater amounts of credit into its economy, amounts which will push its total credit pile ever higher into the stratosphere, until one day it pulls a Europe and finds itself in a situation where there are no further encumberable assets (for secured loans), and where ever-deteriorating cash flows are no longer sufficient to satisfy the interest payments on unsecured debt, leading to what the Chinese government has been desperate to avoid: mass corporate defaults. 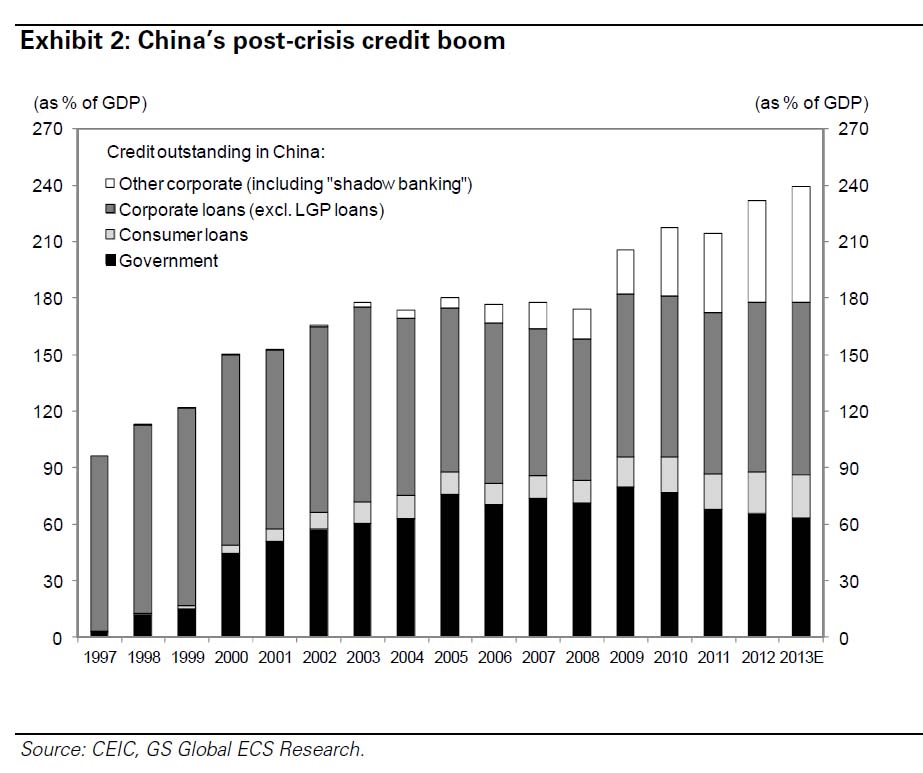 At that point it will be up to the PBOC to do what the Fed, the ECB, the BOE and the BOJ have been doing: remove any pretense of money creation via the commercial bank complex (even if these are merely glorified government-controlled entities), and proceed to outright monetization of de novo created assets, thus flooding the system with as much money as is needed to preserve the illusion of growth. Naturally, with the Chinese stock market having proven itself to be a horrible inflation trap (and as a result the bulk of new levered money creation goes into real estate), the inflation explosion that would result would be epic.

And that, in a nutshell, is the reason why China is doing all it can to prepare for the moment when capital flows will soar once the PBOC no longer has the option to extend and pretend its moment of entry into the global reflation race. Yes, it will be caught between a rock (hyperinflation) and a hard place (a very hard crash landing), but the fact that neither of those outcomes has a happy ending will hardly stop the PBOC from at least preserving the alternative. That alternative will of course be to be ready and able to hit the switch when the BOJ’s printer burns out, and someone else has to step in and fill its shoes in the global “money creation” strategy, which sadly is the only one the world has left.

Finally, the question then will be not if, or how long, the US Dollar will remain the world’s reserve currency, when even the Developed world is forced to admit the PBOC’s monetarist primacy over the Fed, but just how much unencumbered gold one has to hedge against what will be the final, global bout of hyperinflation, the one spurred by every single DM and EM central bank is forced to print for dear fiat status quo life, or else.