– These Charts Better Not Reflect The True State Of The US Economy (ZeroHedge, April 6, 2013):

Lately, when it comes to obtaining an accurate sense of the true state of the US economy, it is as difficult if not more than analyzing the openly-manipulated Chinese data. On one hand, the Fed-juiced market, which has lost its discounting powers, no longer reflects the current or future economic (or corporate) fundamentals, on the other, massive seasonal aberrations, whether purposeful or accidental, have made a mockery of any data series, be it jobs, manufacturing, retail sales, or housing. On the other, the administration – still stuck in the worst economic “recovery” since the Great Depression – is desperate to telegraph an improving economy, most evident in the months leading up to the presidential election, which makes taking any data at face value problematic and naive at best. Yet even the openly-contradicting Chinese data manipulation has its Achilles heel in the form of monthly electricity consumption (and to a lesser extent, production) updates.

So what is the US equivalent of Chinese electricity consumption data? We believe it may be the little-tracked, and thus not nearly as “adjusted” weekly updates from the Energy Information Administration, whose data on barrels of US product supplied of both total petroleum products and just gasoline are as indicative of the true state of the energy-hungry beating heart of the US economy as any other data set, and is likely a far more accurate representation of what is really going on between the lines.

Sadly, if that is indeed the case, then the disconnect between propaganda myth and reality is about as big as can be, since on a blended 52-week average basis, the total product supplied of motor gasoline is back to 2003 levels (black line on chart below). However, where it gets really scary is looking at the total product supplied category, which includes gasoline and all other product such as heating oil, propane, and kerosene. As the chart below shows, the US economy, whose GDP we are led to believe has never been higher, now has the same total consumption of all petroleum products (red line) as it did… back in 1997! 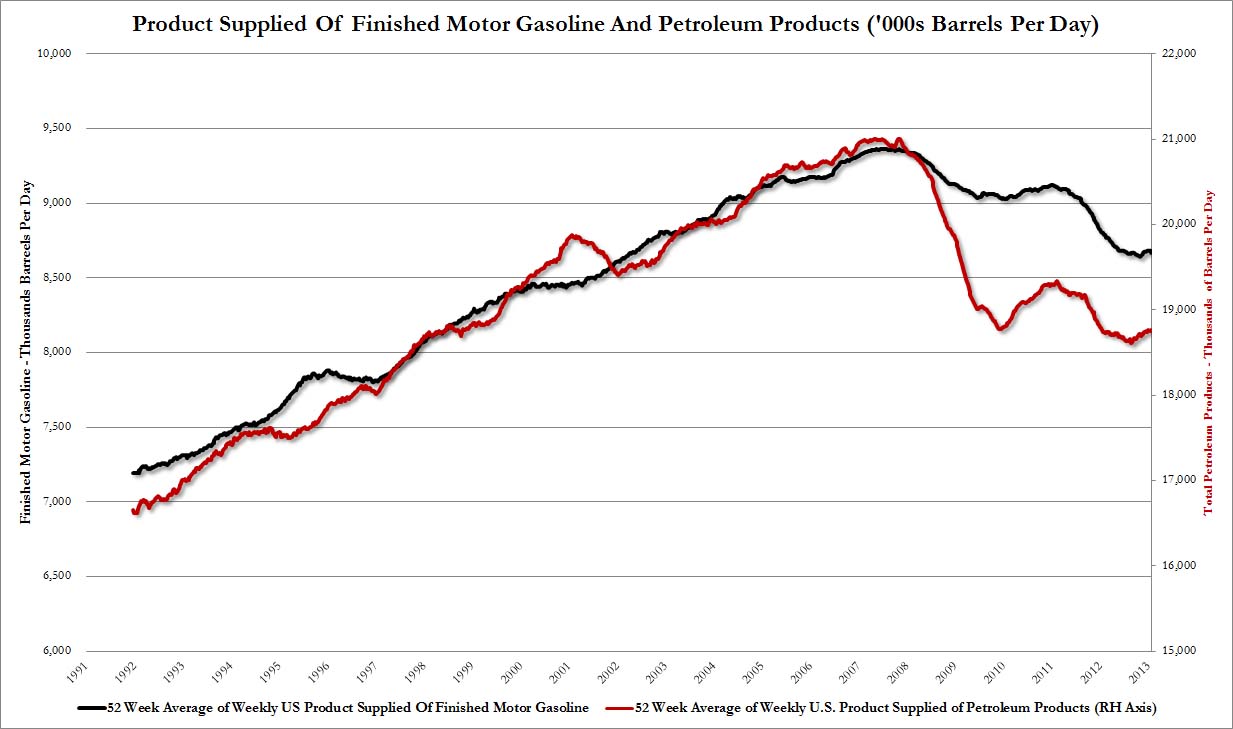 The same disturbing story is revealed when looking at various other EIA charts of sales, and thus demand, such as this one showing that 52 week average sales and deliveries of gasoline by prime supplier in the US has also tumbled to levels last seen in the late 90’s. 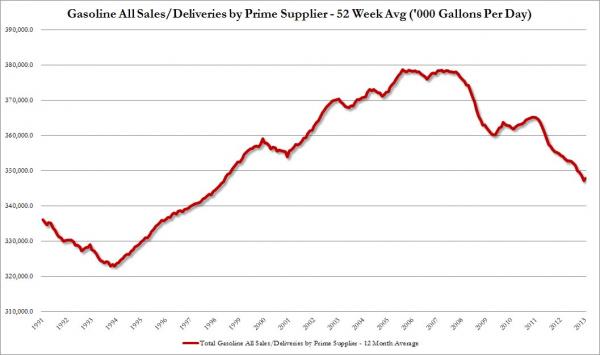 But maybe it is just the usage of more efficient modes of transportation, and a higher MPG as more Americans shift to electric cars and some such. Sure, maybe. Of course, that would not explain why the total miles driven has hardly budged for the last decade, and is far off the all time high recorded when the economy was indeed humming on all fours, if moments before it imploded in 2007… 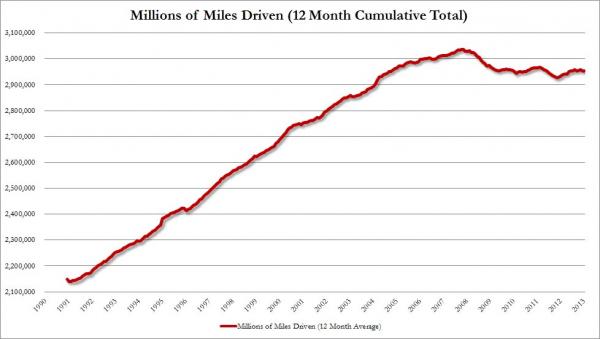 … but the biggest question we have is just how did the biggest boost in energy and engine efficiency occurred at two key junctions: Just after the Lehman Failure, and just after the US downgrade and the first debt ceiling crisis, when the total sales of gasoline by US retailers literally went off the charts, and which data series is now languishing at levels not seen since the 1970s (unfortunately we can only estimate: not even the EIA’s data set goes back that far). 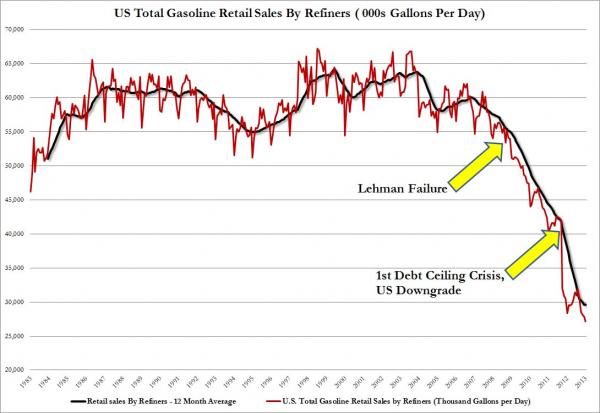 Perhaps, just perhaps, Occam’s razor applies in this situation as well, and the collapse in energy demand in the US has little to do with MPG efficiency, higher productivity, and throughput mysteriously achieved just when the entire economy was imploding in the months after the Lehman failure, and despite the re-emerging proliferation of cheap Fed debt funded SUVs and small trucks (discussed here), and everything to do with the US consumer being slowly but surely tapped out?

Of course, if that is the case, than the US economy is far, far weaker than even we could have surmised, although it certainly would explain the desperation with which the Fed is doing everything in its power to preserve the levitation of the S&P, i.e., the confidence that all is well despite all signs to the contrary. Because should the market finally be allowed to reflect the underlying economy – not the administration represented economy, but the real one – then everything that has transpired in the past five years will be child’s play compared to what’s coming.