This happened earlier today, at the ECB press conference:Scott Solano, DPA: Mr Draghi, I’ve got a couple of question from the viewers at Zero Hedge, and one of them goes like this: say the situation in Greece or Spain deteriorates even further, and they want to or are forced to step out of the Eurozone, is there a plan in place so that the markets don’t basically collapse? Is there some kind of structural system, structural safety net, especially in the area of derivatives? And the second questions is: you spoke earlier about the Emergency Liquidity Assistance, and what would have happened to the ELA in Cyprus, the approximately €10 billion, if the country had decided to leave the Eurozone?

Mario Draghi, ECB: Well you really are asking questions that are so hypothetical that I don’t have an answer to them. Well, I may have a partial answer. These questions are formulated by people who vastly underestimate what the Euro means for the Europeans, for the Euro area. They vastly underestimate the amount of political capital that has been invested in the Euro. And so they keep on asking questions like: “If the Euro breaks down, and if a country leaves the Euro, it’s not like a sliding door. It’s a very important thing. It’s a project in the European Union. That’s why you have a very hard time asking people like me “what would happened if.” No Plan B.

Secondly, I think the ECB has shown its determination to fight any redenomination risk. And OMT with its precise rules and acting within its mandate, is there to this purpose. So that’s the answer to the first question.

The second question was about the ELA, but again it’s related to “if Cyprus leaves”  and again we don’t have that in mind, so…. No Plan B.

Finally, here is the response by the EURUSD the second the Zero Hedge questions were asked. 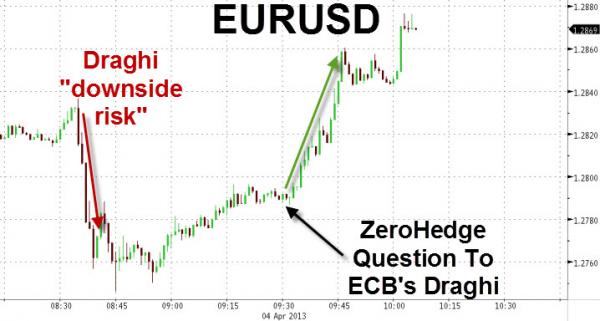 The full exchange takes place 57 minutes 45 seconds into the clip. 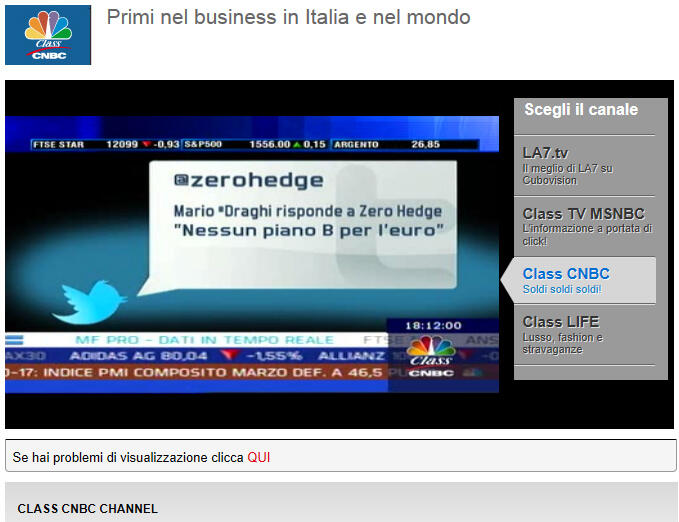 1 thought on “ECB’s Mario Draghi Responds To Zero Hedge: ‘THERE IS NO PLAN B’”