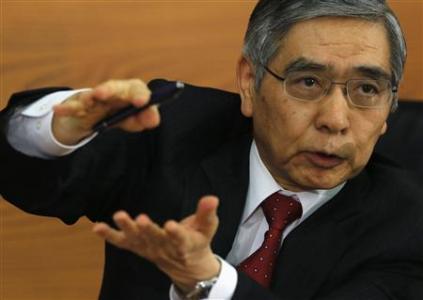 The Bank of Japan unleashed the world’s most intense burst of monetary stimulus on Thursday, promising to inject about $1.4 trillion into the economy in less than two years, a radical gamble that sent the yen reeling and bond yields to record lows.

New Governor Haruhiko Kuroda committed the BOJ to open-ended asset buying and said the monetary base would nearly double to 270 trillion yen ($2.9 trillion) by the end of 2014, a dose of shock therapy officials hope will end two decades of stagnation.

The policy was viewed as a radical gamble to boost growth and lift inflation expectations and is unmatched in scope even by the U.S. Federal Reserve’s own quantitative easing program.

The Fed may buy more debt, but since Japan’s economy is about one-third the size of the economy, Kuroda’s plan looks even bolder.

“This is an unprecedented degree of monetary easing,” a smiling Kuroda told a news conference after his first policy meeting at the helm of the central bank.

“We took all available steps we can think of. I’m confident that all necessary measures to achieve 2 percent inflation in two years were taken today,” he said.

One of those steps was to abandon interest rates as a target and become the only major central bank to target primarily the monetary base – the amount of cash it pumps out to the economy. It adopted a similar policy in 2001-2006, but not on this scale.

Financial markets liked what they saw.

“The result is nothing short of regime change,” HSBC’s Japan economist Izumi Devalier said in a report.

“The BOJ has now made a much firmer commitment to achieving its 2 percent inflation goal, and has demonstrated that it will do anything short of foreign-bond buying to achieve this goal.”

Adjusting for gross domestic product, Japan’s program will be twice as large as the Fed’s asset purchases, said Stephen Jen, managing partner at SLJ Macro Partners in London. “Investors were justified in feeling shocked and awed,” he said.

“It may not work but they will go down swinging,” added Bill Gross, founder and chief investment officer at giant bond fund PIMCO, via his Twitter account.

Japan’s move won cautious endorsements from a few top Fed policymakers, who said it could help economies around the world.

Watching Japan struggle to beat deflation and revive an ailing economy “is not a healthy element of the global scene”, Atlanta Fed President Dennis Lockhart said on the sidelines of a student investment forum in Ohio.

“So their preparedness to take more aggressive action, if it works, will certainly help everyone,” he said. “How it will work or how effective it will be, it’s too early to say.”

Charles Evans, president of the Chicago Fed, called the move “pretty aggressive”, adding: “I certainly hope that every foreign central bank around the world is able to adopt policies that ultimately lead to the most vibrant economies that those economies can have because we need it around the world.”

The Fed and Bank of England have also embraced large-scale bond purchases in an effort to boost growth, while the European Central Bank said on Thursday it would keep policy loose for as long as necessary to revive the struggling euro zone economy.

“I do think the Fed views the move in a favorable light,” said Stephen Oliner, a former senior Fed economist, adding that Fed Chairman Ben Bernanke “wants the major central banks to support the global recovery”.

But German Finance Minister Wolfgang Schaeuble said Japan’s central bank would not be able to boost growth on its own and urged the government to carry out structural reforms.

“If monetary policy is used instead of financial and economic changes then we run in the wrong way,” he said.

It could leave the central bank heavily exposed to government debt and potentially huge losses if it failed to stoke inflation and investors lost faith in its efforts to revive the economy.

“It is as if we’ve gone back to the quantitative easing of the 2000s,” said Hiroaki Muto, senior economist at Sumitomo Mitsui Asset Management in Tokyo.

“Targeting the monetary base will lead to a huge increase in current account balances that commercial banks keep at the BOJ, but I’m still not sure if this money will move through the economy.”

The monetary base, or cash and reserves at the BOJ, already hit a record in March, but the huge pile of money has failed to end deflation or boost wages.

Unprecedented easing may also provoke a currency war as other Asian exporters try to stay competitive with a weaker yen.

Currency traders said they expected the dollar, last at 96.19 yen, could hit 100 in the months ahead, a level it last reached four years ago.

The BOJ will buy 7.5 trillion yen of long-term government bonds per month, roughly 70 percent of bonds sold in markets. It combined two bond-buying schemes, its asset-buying and lending program and the “rinban” market operation, to buy longer-dated government bonds, including those with duration of 40 years.

“I can say that the BOJ came up with a perfect answer in response to market expectations,” said Junko Nishioka, chief Japan economist at RBS Securities.

“Kuroda made good on his promise of boosting monetary easing in terms of both volume and types of assets that the bank purchases.”

Kuroda said the BOJ wanted to push down bond yields enough so that investors will start buying riskier assets, such as property and stocks, and to prompt households and companies to spend now rather than later on expectations of rising prices.

The central bank temporarily scrapped a self-imposed rule of capping its holdings of government bonds to the value of bank notes in circulation, despite reservations by some board members that doing so could nudge it closer to monetizing public debt – or directly underwriting government borrowing.

Kuroda brushed aside concerns that excess money printing by the BOJ will sow the seeds of an asset-price bubble, which was repeatedly mentioned by his predecessor.

“I don’t see a risk of a sudden spike in long-term interest rates or the creation of an asset-price bubble,” Kuroda said.

1 thought on “Bank Of Japan To Pump $1.4 TRILLION Into Economy In Unprecedented ‘Stimulus’”