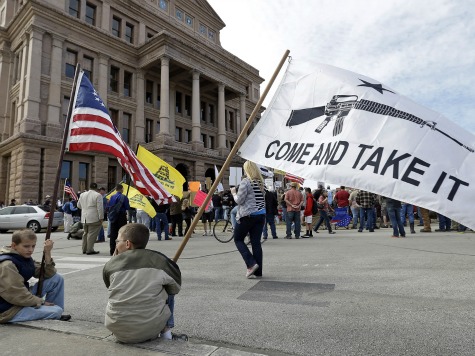 As sheriffs across the nation signal opposition to enforcing additional federal gun regulations, the Utah Sheriffs’ Association sent a letter to President Obama assuring him that its members similarly will not comply.

The letters insists that the rights of Utah citizens trump any new gun control measure that Congress might pass, and sheriffs in Utah are prepared to trade their lives in defense of their constituents’ right to keep and bear arms.

The letter, signed by 28 of Utah’s 29 sheriffs, sternly rejects the citation of recent tragedies as Congress’s rationale for expanded gun regulations:

With the number of mass shootings America has endured, it is easy to demonize firearms; it is also foolish and prejudiced. Firearms are nothing more than instruments, valuable and potentially dangerous, but instruments nonetheless. Malevolent souls, like the criminals who commit mass murders, will always exploit valuable instruments in the pursuit of evil. As professional peace officers, if we understand nothing else we understand this: lawful violence must sometimes be employed to deter and stop criminal violence. Consequently, the citizenry must continue its ability to keep and bear arms, including arms that adequately protect from all kinds of illegality. [original emphasis]

…as the duly elected sheriffs of our respective counties, we will enforce the rights guaranteed to our citizens by the Constitution. No federal official will be permitted to descend on our constituents and take from them what the Bill of Rights–in particularly Amendment II–has given them. We, like you [Mr. President], swore a solemn oath to protect and defend the Constitution of the United States, and we are prepared to trade our lives for the preservation of its traditional interpretation.

Rich County Sheriff Dale Stacey was among the 28 signatories on the letter, and on March 27 he spoke to Breitbart News:

The Sandy Hook shooting was terrible and we, in law enforcement, work to stop those kinds of things from happening. But taking guns from honest people isn’t going to fix anything. The criminals will keep their guns, and regardless of what the law says criminals will always have guns.

I’ve owned a gun for 40 years and I’ve never committed a crime with it. What good can be done by taking it away from me?

We believe that if we do not uphold the oaths we have taken as Sheriffs we will gradually lose all our rights.

In recent legislative talks, a ban on so-called “assault weapons” from Senator Dianne Feinstein (D-CA) did not make it out of committee. It is expected to receive a separate vote as an amendment to as-yet-unseen gun control legislation from Senate Democrats.