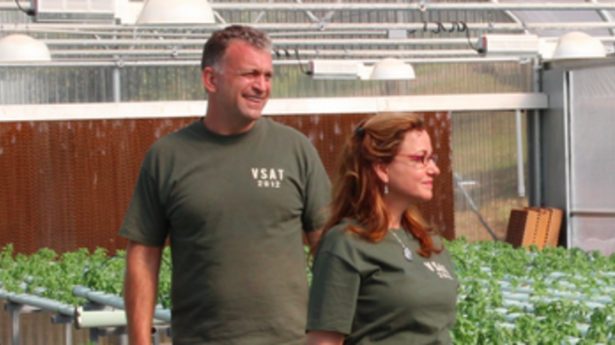 Former MSNBC host and author of the book Greedy Bastards Dylan Ratigan has announced that after leaving his show in June of 2012, he has re-launched his life as an organic, hydroponic farmer. In an open letter on his website DylanRatigan.com, Ratigan proclaimed that his life changed direction when he found himself burnt out by “hollow political debates” and “in search of meaning and purpose in my work and life.”

Ratigan said that it was meeting a Marine combat veteran war protester and his wife who appeared on “The Dylan Ratigan Show” in June that inspired him. The couple explained to him a technique for hydroponic farming that reportedly  uses 90 percent less water than a conventional farm, but produces three times as much food.

“It was a business that promised to cure food deserts – areas where access to fresh and healthy food is limited – while having the potential to create jobs for thousands of combat veterans, each of whom was the beneficiary of $1 million in military training while on active duty,” wrote Ratigan Wednesday.

“Since I left MSNBC and dylanratigan.com last June, I first started working with these inspiring visionary veterans on the phone, and then in person to expand their dream and help turn it into a reality,” he continued. “The process alone has restored meaning and purpose in my life, my health and spirit have taken on a renewed vitality and, because of my time with you, I have had the opportunity and privilege to literally put my money where my mouth is.”

Ratigan has relocated from New York City to San Diego County, California, where he is working with Colin and Karen Archipley at their hydroponic organic farm, “Archi’s Acres” full-time. He and the project’s other backers see the program as a means of providing sustainable food crops in the U.S. while offering job opportunities to veterans.

Ratigan will appear Thursday, March 21 on ABC’s “The Chew” and on Friday, March 22 on MSNBC’s “Martin Bashir” to discuss the project and share his recipe for a delicious organic kale salad.