UPDATE: Well that didn’t take long – The Portuguese Finance minister just denied his earlier comments and added that the Cyprus deal is NOT a template for future actions (EURUSD doesn’t believe him).

The shambles continues in Europe. This morning we saw a plethora of EU officials explaining how the Cyprus ‘deal’ is a unique, one-of-a-kind debacle helping to talk back #DieselBoom‘s mis-words, only to have their credibility destroyed by the actual transcript and his actual words. Then we get the fact that a new EU-wide bill on deposit bail-ins is introduced… and now the Portuguese finance minister has added to the dysphoria by explaining that, “the Cyprus deal sets Euro precedent on deposit protection,” and we therefore assume on deposit impairment. It seems EURUSD also sees this… 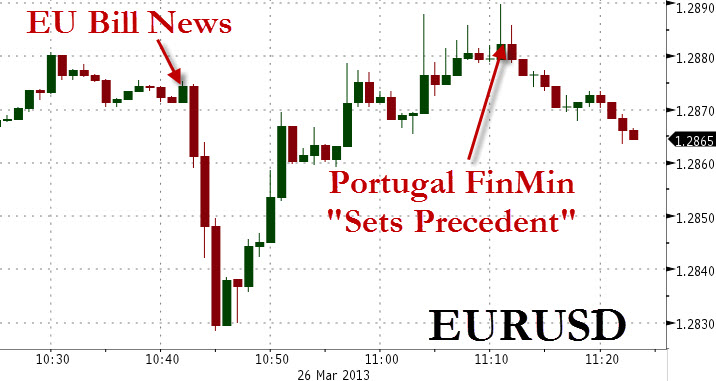