– Daniel Hannan Urges Cyprus To ‘Default, Devalue, And Decouple’ Itself Back To Growth 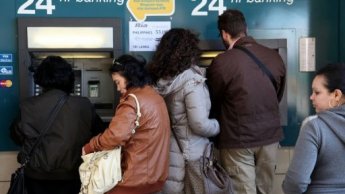 The European Central Bank warned Cyprus Thursday that it has four days to raise €5.6 billion to avoid bankruptcy – or risk losing bailout funds. The government ruled out the unpopular levy on bank funds during Thursday’s Plan B talks.

Cyprus has four days to agree on a new plan to raise funds to avoid bankruptcy, with the European Central Bank warning Thursday it will pull the plug on the country’s banks at the start of next week if no solution is found.

Facing the ultimatum, the Cypriot government was racing to cement a new package that will please both Parliament and the country’s potential international creditors.

Party leaders met with the president to consider a range of measures that could raise the 5.8 billion euros ($7.5 billion) needed to qualify for 10 billion euros ($12.9 billion) in rescue loans from the eurozone partners and the International Monetary Fund.

The European Union gave Cyprus till Monday to raise the billions of euros it needs to secure an international bailout or face a collapse of its financial system that could push it out of the euro currency zone.

In a sign it was at least preparing for the worst, the Cypriot government sought powers on Thursday to impose capital controls to stem a flood of funds leaving the island if there is no deal before banks reopen following this week’s shutdown.

Parliament will reconvene later on Friday to debate a raft of government crisis measures after lawmakers adjourned a late-Thursday sitting saying they needed more time for consultation.

Even those measures looked likely to fall short of a promised “Plan B” to raise the 5.8 billion euros demanded by the EU in return for a 10 billion euro lifeline from the EU and IMF.

The European Central Bank said it would cut off liquidity to Cypriot banks without a deal, and a senior EU official told Reuters the bloc was ready to see the island banished from the euro to contain damage to the wider European economy.

Trying to placate its lenders, the government proposed to parliament a “solidarity fund” that would bundle state assets, including future gas revenues, as the basis for an emergency bond issue, likened by JP Morgan to “a national fire sale”.

It also sought the power to impose capital controls on banks, a type of measure unseen since before the country joined the single currency bloc five years ago.

The European Central Bank, which has kept Cyprus’s banks operating with a liquidity lifeline, said the government had until Monday to get a deal in place, or funds would be cut off.

“Thereafter, Emergency Liquidity Assistance (ELA) could only be considered if an EU/IMF program is in place that would ensure the solvency of the concerned banks,” the ECB said.

In Brussels, a senior European Union official told Reuters that an ECB withdrawal would mean Cyprus’s biggest banks being wound up, wiping out the large deposits it has sought to protect, and probably forcing the country to abandon the euro.

“If the financial sector collapses, then they simply have to face a very significant devaluation, and faced with that situation, they would have no other way but to start having their own currency,” the EU official said.

Cypriot banks, crippled by their exposure to Greece, the center of the euro zone debt crisis, have been closed all week and are not due to reopen until Tuesday.

Long queues formed on Thursday at ATMs still dispensing cash, and there were angry scenes outside parliament where several hundred protesters, many of them bank employees, rallied after rumors the second-largest lender, Cyprus Popular Bank, was to be wound up.

“We have children studying abroad, and next month we need to send them money,” protester Stalou Christodoulido said through tears. “We’ll lose what money we had and saved for so many years if the bank goes down.”

The central bank said it was readying measures to keep Popular Bank afloat. Some banking officials said it could be split between good and bad assets.

Under the levy rejected by parliament, EU lenders, notably Germany, had wanted uninsured bank depositors to bear some of the cost of recapitalizing the banks, but Cyprus feared for its future reputation as an offshore banking haven and planned to spread the burden also to small savers whose deposits under 100,000 were covered by state insurance. Lawmakers threw it out.

In Moscow since Tuesday, Cypriot Finance Minister Michael Sarris said he was discussing possible Russian investments in banks and energy resources, as well as an extension of an existing 2.5-billion-euro Russian loan.

He said Cyprus had no plans to borrow more money from Russia and add to its debt mountain. The Russian Finance Ministry had said on Monday that Nicosia sought an extra 5-billion-euro loan.

The chairman of the euro group of finance ministers, Dutchman Joreon Dijsselbloem, told the European Parliament in Brussels that Moscow informed the EU it had no intention of ploughing more money into Cyprus.

Senior euro zone officials acknowledged in a confidential conference call on Wednesday that they were “in a mess” and discussed imposing capital controls to insulate the currency area from a possible collapse of the small Cypriot economy.

Cyprus itself refused to take part in the call, minutes of which were seen by Reuters. Several participants described its absence as troubling and reflecting the wider confusion surrounding the island’s predicament.