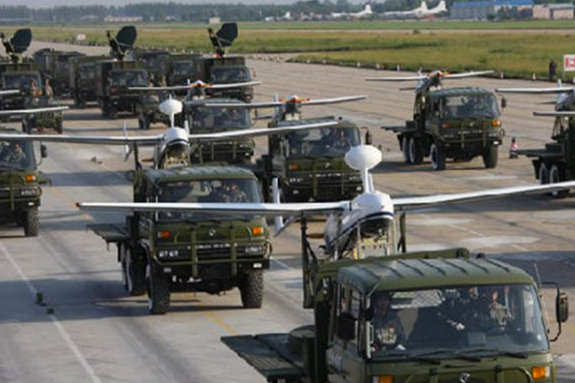 Chinese military drones have already entered the frontlines of China’s territorial disputes with neighboring countries such as Japan by flying maritime patrols over disputed areas. The Project 2049 Institute report warned that China could be tempted to use drones more aggressively without risking human lives, or even consider “plausibly deniable” drone attacks blamed upon mechanical failure or cyberhackers.

Chinese strategists have also discussed using swarms of drones to overwhelm the U.S. Navy’s carrier groups in the unlikely possibility of a shooting war. The drones could act as decoys, use electronic warfare to jam communications and radar, guide missile strikes on carriers, fire missiles at U.S. Navy ships or dive into ships like kamikaze robots. [Video: RoboBees: Design Poses Intriguing Engineering Challenges]

All the main branches of the Chinese military field operational drone units. The new report identifies those military units along with major academic, industry and military organizations involved in building Chinese drones.

The report goes on to examine the state of Chinese drone technology. China is developing drones such as the rumored “Dark Sword” stealth drone that have low radar profiles to escape radar detection. It also wants to build “space” drones that could loiter at heights of 31 miles (50 kilometers) above the Earth to provide constant surveillance. (Scientists typically consider 62 miles (100 km) to mark the boundary for the edge of space.)

Chinese engineers have even begun working on drones that have the software brains to fly in formation, do aerial refueling and takeoff and land autonomously — capabilities that the U.S. military has also developed or begun testing for its own drones.

The risk of war between the U.S. and China remains low. But the report cautions that the U.S. military could prepare for the worst-case scenario by hardening its existing air bases in Asia and developing energy weapons (such as lasers) for better air and missile defense.