While chart analogs provide optically pleasing (and often far too shockingly correct) indications of the human herd tendencies towards fear and greed, a glance through the headlines and reporting of prior periods can provide just as much of a concerning ‘analog’ as any chart. In this case, while a picture can paint a thousand words; a thousand words may also paint the biggest picture of all. It seems, socially and empirically, it is never different this time as these 1936 Wall Street Journal archives read only too well… from devaluations lifting stocks to inflationary side-effects of money flow and from short-covering, money-on-the-sidelines, Jobs, Europe, low-volume ramps, BTFD, and profit-taking, to brokers advising stocks for the long-run before a 40% decline.Things look eerily similar eh? 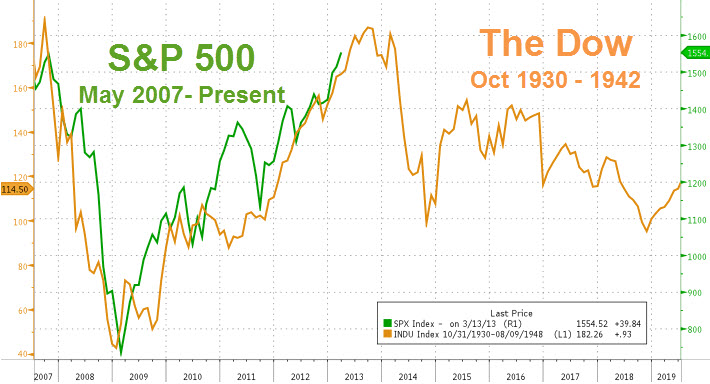 But when we look at the headlines in the Wall Street Journal from mid 1936 to mid 1937 as the market topped out (orange oval), dipped, was bought back, then collapsed 40% in 3 months, nothing ever changes… 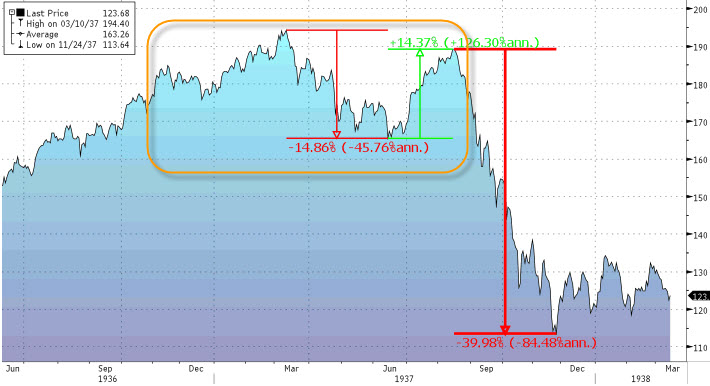 N.Y. Central Has Repaid All Government Loans
The Wall Street Journal, 978 words
Dec 1, 1936
WASHINGTON Numerous railroad developments here yesterday were climaxed by the announcement of RFC Chairman Jesse H. Jones that New York Central had repaid all of its government loans, totaling $16,858,950, most of which was not due until 1941.

The Buying Is Not Speculation – Cash On The Sidelines…

It’s Cash Bull Market With Little Inflation, Says Exchange Bulletin
The Wall Street Journal, 169 words
Dec 16, 1936
“This is eminently a cash market, and as such is relatively devoid of that major characteristic of speculative inflation, the use of borrowed money.” says the December Bulletin of the N.Y. Stock Exchange.

Inflationary Side-Effects – Buy It All It’s Going Up…

The Wall Street Journal, 1027 words
Dec 16, 1936
As commodity prices continued to advance yesterday to the accompaniment of increasing public speculation in futures markets, signs of a feeling of caution appeared from widely separated centers.

As Goes The US So Goes The Rest Of The World…

London, New York Stock Transactions Largest in Months – British Brokers Stand in Queues to Fill Orders Activity Ascribed to World Efforts to Revive Trade
The Wall Street Journal, 956 words
Oct 8, 1936
Growing realization that the determined international effort now being made to sweep away trade barriers will be followed by improved business conditions throughout the world brought a rush of business to the security markets in New York and London yesterday such as not been seen for months.

Markets Cheerful Over Devaluation; Morgenthau Not Afraid of Dumping
Selective Buying Here and Abroad Motors and Other Shares Held To Benefit From Improved World Trade Are Strong Commodities Less Responsive International Markets
The Wall Street Journal, 1726 words
Sep 29, 1936
A note of cautious optimism was sounded by leading stock exchanges of the world which were open for business yesterday.

Earnings Yield of 15 Stocks 4.8%, Compared with 9.4% Ten Years Ago
The Wall Street Journal, 1280 words
Aug 7, 1936
Industrial earning power is valued nearly twice as highly in the current stock market as it was ten years ago.

Europe Ever The Optimist Even In The Face Of Dismal Reality…

France Optimistic Despite Continuing European Tension – Growing Franco-English Cooperation Inspires Confidence
The Wall Street Journal, 652 words
Dec 5, 1936
Despite the unabated international tension and sudden menace of a constitutional crisis in Great Britain, the continuance of quarrels between Right and Left wings of the Popular Front, and the persistent antagonism between employers and labor, the general feeling in France is rather optimistic than pessimistic.

Short Covering As Ever…

Active Short Covering Sweeps Grain Prices To New High Levels – Chases Bears
The Wall Street Journal, 1345 words
Dec 2, 1936
New highs for the season were recorded in wheat, corn, rye and oats Tuesday. Spot red winter wheat advanced to the highest level since February, 1929. The sharp upturn, which boosted December corn almost 5 cents, and December wheat about 3 cents, was due principally to short covering by those made uneasy over the sale of an unusually large quantity of spot wheat out of local store, and by generous snowfall over the grain belt. Early in the session the market ruled easy on reports of rain and snow, and predictions for continued unsettled weather.

Sabotaging Federal Economy
The Wall Street Journal, 412 words
Dec 5, 1936
Even the modest beginning which is attempted by WPA officials to reduce cost of government by cutting down the relief roles is encountering strong opposition. It is perhaps only natural that the workers themselves should object, although their methods of protesting through “sitdown” strikes, not to mention the violence which has manifested itself, may be open to question. But much more …

Sales Tax Repeal May Unbalance Kentucky Finances
The Wall Street Journal, 1002 words
Jan 14, 1936
LOUISVILLE, Ky.–Repeal of Kentucky’s 3% sales tax, effective the moment Governor Albert B. Chandler signs it, probably Wednesday will deprive the state of $3,500,000 of revenue budgeted to the expiration of the biennium ending June 30, 1936 and the counties of $1,750,000.

The Foreign Money Will Save Us…

Money On The Sidelines…

The Wall Street Journal, 590 words
Jul 1, 1937
While the Street remains in a cautious frame of mind, there are undoubtedly more possible buyers than sellers around, and it would not take a lot of encouragement to get these gentlemen aboard. Feeling in brokerage circles is that stocks are more likely to advance on any break in the unpleasant headlines these days than to decline far on a continuation of current uncertainties.

The Wall Street Journal, 683 words
Jun 29, 1937
Certainly the market was more active on the downside, which surprised a lot of traders who had expected otherwise. The labor and foreign situations remain the main factors in the picture, and brokers feel that these have not changed one whit for the better thus far.

The Wall Street Journal, 508 words
Aug 24, 1937
A rather depressed feeling is extant in Wall Street as small volume and lower prices continue. Yet there are not many bears in the Street so far as the long pull is concerned. Traders still are stubborn in their theory that stocks are reactionary at the moment from lack of interest rather than any important liquidation. This is the period of the year when business takes a final breathing spell before the more active Fall and some think the stock market is doing likewise and that better days are ahead.

Rallies had Real Volume Then – No Low Volume Ramps…

The Wall Street Journal, 564 words
Aug 16, 1937
If Saturday’s volume was any indication, revived interest in the stock market is here in the opinion of the Street. Furthermore the scope of trading Friday and Saturday indicated a broadening interest which included medium priced as well as low priced issues on contrast to the extended period wherein so-called “quality” stocks held sway in a limited market with small volume.

The Wall Street Journal, 665 words
Aug 7, 1937
Profit taking for the week-end brought prices down in yesterday’s market, but the undertone remained steady and brokers said there was nothing important in the character of the selling. Many houses were advising the purchase of favored issues on any further reactions. Metal shares ended the day with advances in many cases. There was impressive buying reported in the copper issues largely for long pull purposes.

The Wall Street Journal, 649 words
Aug 10, 1937
While volume left much to be desired, the expectation of stronger and more active markets continued to pervade Wall Street. Moreover, the general business picture is regarded as more pleasing than at any time since the so-called Summer “lull” came into force. Incidentally, the seasonal letdown thus far has not proved to be as extensive as many predicted and expected. Brokers say that many clients are away and that there are others who will be replacing their sold-out long positions in coming weeks.

See – it really is never different this time. It merely appears so since – as Kyle Bass so eloquently noted, the brevity of financial memory is about two years…