The France-based ratings agency has just joined China’s Dagong, and US Moody’s by Fitch-slapping Italy with a BBB ratings handle. Citing four main reasons: election results which and ‘non-conducive’ for further structural reforms, deeper than expected recession, greater than expected budget deficits, and a weak government less able to respond to shocks. But apart from all that, as we noted earlier, Italian stocks and bonds are bid.BTP Futures not happy… 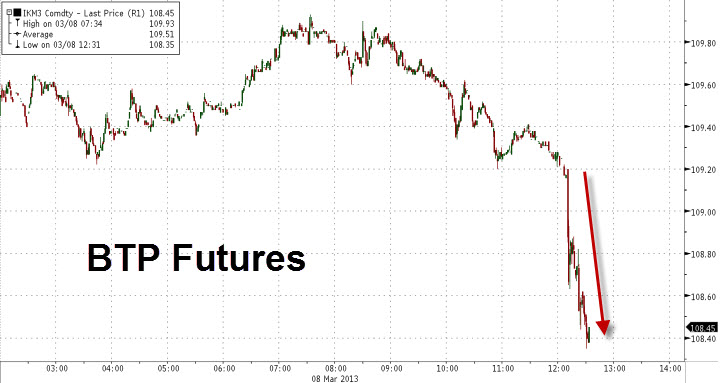 Fitch Ratings-London-08 March 2013: Fitch Ratings has downgraded Italy’s Long-term foreign and local currency Issuer Default Ratings (IDR) to ‘BBB+’ from ‘A-‘. The Outlook on the Long-term IDRs is Negative. Fitch has simultaneously affirmed the Short-term foreign currency IDR at ‘F2’ and the common eurozone Country Ceiling for Italy at ‘AAA’.

– The rating remains supported by the relatively wealthy, high value-added and diverse economy with moderate levels of private sector indebtedness.

– Italy has progressed substantially over the past two years with fiscal consolidation. Public sector deficit was 3% of GDP in 2012, a result of 2.3pp fiscal consolidation in structural terms, according to the recent estimate of the European Commission.

– The fiscal measures already adopted should be sufficient to deliver a further narrowing of the budget deficit in 2013 despite the continuing recession. Fitch expects the deficit in 2013 to be around 2.5% of GDP. In structural terms, this would be close to the constitutional requirement of a balanced budget.

– Low contingent fiscal risks from the banking sector; an underlying budgetary position close to that necessary to stabilise the government debt to GDP ratio; and sustainable pension system underpins confidence in the long-term solvency of the Italian state.

– The Italian sovereign has demonstrated its financing flexibility and resilience during the crisis reflecting a strong domestic investor base and average duration of 4.74 years.

The Negative Outlook reflects the following risk factors that may, individually or collectively, result in a downgrade of the ratings:

– Deeper and longer recession than currently forecast by Fitch that undermines the fiscal consolidation effort and increases contingent risks from the financial sector.

– Economic and fiscal outturns that reduce confidence that GGGD will be placed on a firm downward path from 2014, after peaking in 2013.

– Sustained deterioration in fiscal funding conditions with adverse implications for financial conditions for the private sector and public debt dynamics.

– Re-intensification of the eurozone crisis could lead to a direct increase in GGGD through contingent liabilities due to additional EFSF/ESM commitments and could further weaken the economy through a fall in external demand, weaker confidence and tighter credit conditions.

– Prolonged uncertainty over economic and fiscal policies, failure to comply with the constitutional requirement of balanced budget.

– Confidence that the public debt to GDP ratio is on a firm downward path.
– Further structural reforms that enhance the competitiveness and growth potential of the Italian economy.

Financing conditions have been relatively benign in recent months. The potential backstop of external support from the ESM and ECB reduces the tail risk of a sovereign liquidity crisis for Italy and is supportive of the rating. While it remains uncertain under what conditions Italy would apply for official assistance, the request itself would be neutral for the rating.

The rating incorporates Fitch’s assumption that the medium-term fiscal trajectory and commitments made by Italy under the Stability and Growth Pact and implied by the constitutional balanced budget amendments will be sustained by any new government.

Fitch assumes that Italy will start recovering in H213 from its deep recession as the large shocks causing the current recession (fiscal consolidation, tight financing conditions, and weak external demand) gradually fade away.

Fitch assumes that the contingent liabilities from the banking sector for the Italian government are limited. Nonetheless, if the recession is deeper and longer than currently anticipated, the risk that the government may be required to make further injections of capital, beyond the Monte dei Paschi recapitalisation, cannot be discounted.

Fitch maintains its assumption that medium-term potential growth is 1% even in light of structural reforms adopted over the last two years.

The current rating reflects Fitch’s judgement that Italy will retain market access and, if needed, EU intervention would be requested and provided to avoid unnecessary strains on sovereign liquidity.

Furthermore, Fitch assumes there will be progress in deepening fiscal and financial integration at the eurozone level in line with commitments by euro area policy makers. It also assumes that the risk of fragmentation of the eurozone remains low.