Coming to a military dictatorship near you.

– NDAA UPDATE: Is the NDAA Lawsuit Headed To The Supreme Court? (MUST WATCH VIDEO) 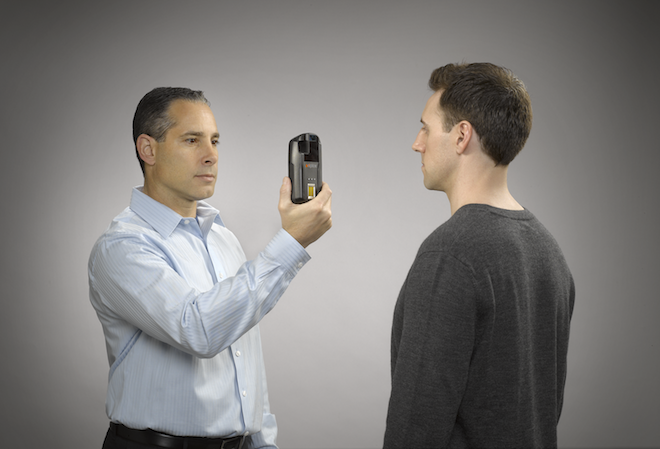 California-based AOptix landed a deal with the Defense Department for its biometrics identification system that loads onto a smartphone (shown here as a hardware mock-up). Photo: AOptix

In a few years, the soldier, marine or special operator out on patrol might be able to record the facial features or iris signature of a suspicious person all from his or her smartphone — and at a distance, too.

The Defense Department has awarded a $3 million research contract to California-based AOptix to examine its “Smart Mobile Identity” biometrics identification package, Danger Room has learned. At the end of two years of research to validate the concepts of what the company built, AOptix will provide the Defense Department with a hardware peripheral and software suite that turns a commercially available smartphone into a device that scans and transmits data from someone’s eyes, face, thumbs and voice.

“They’ve asked us, based on what they’ve seen of our product, to work on some more specific needs and requirements for DoD,” Chuck Yort, AOptix’s vice president for identity solutions, tells Danger Room. Data security for the system will be provided by partner CACI International, which shares in the $3 million contract, which will be officially announced Wednesday morning.

Currently, U.S. troops rely on a single-use device, known as the Handheld Interagency Identity Detection System (HIIDE), to scan, upload and transmit data from someone’s facial, eye or thumb features to its wartime biometrics databases. The HIIDE, shown below, looks a bit like the camera Hipstamatic uses for its logo, and troops who want to operate it need to bring it close to the faces and thumbs of the people they scan. 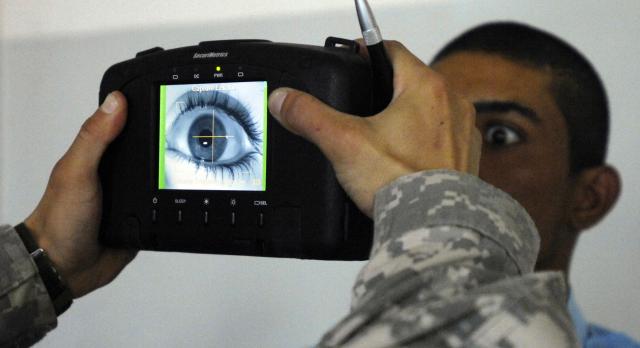 A soldier in Iraq scans an Iraqi policeman’s eye using a cumbersome, viewfinder-like mobile system in 2009. The Pentagon just inked a deal with a California company that thinks it’s got a better way. Photo: U.S. Army

The hardware AOptix has developed isn’t itself a phone. It’s a peripheral that wraps around a phone to enable the additional sensing capabilities necessary to acquire the biometric data. AOptix was hesitant to describe the peripheral, but supposedly it won’t impact the phone’s form factor, and the company swears a smartphone bulked up with its sensing dongle will weigh under a pound. Unlike HIIDE, it’ll only take one hand to operate.

Outside of the add-on, the computational power of the smartphone is supposed to enable the software package that AOptix built — and displayed at a September conference in Tampa partially sponsored by the National Security Agency. The company won’t say what operating system Smart Mobile Identity it’s configured to run on, but the Defense Department tends to like the relative cheapness and open architecture of Android devices. Yort promises the software will have a “very intuitive interface that leverages smartphone conventions.”

Smart Mobile Identity has limited ability to record biometric data at a distance, but its specs outperform the HIIDE camera. It scans faces at up to two meters away, irises from one meter, and voice from within the typical distance from a phone. Thumbprints will still require a finger against the reinforced glass face of the phone. Joey Pritikin, another AOptix executive, says that an additional advantage of the system is its ability to capture an iris in bright sunlight, which is a challenge for HIIDE and other biometrics device. Apparently the system will also be able to snap an image of someone’s face or eye once the phone running the software focuses on it, without a specific click, swipe or press.

AOptix is also cagey about which part of the Defense Department inked the deal with the company. (Pentagon officials didn’t respond to requests for additional information.) But since AOptix and CACI are supposed to deliver Smart Mobile Identity after 24 months of research, its most likely application would be for special operations forces, who after the 2014 completion of the troop drawdown from Afghanistan will be doing the majority of patrolling in places where biometric ID collection on a mobile device will be relevant.

It’s worth noting that even though the military is backing away from foot patrols in warzones, it’s not backing away from biometric data acquisition — far from it. The U.S. Central Command has held on to the biometric database of three million people it compiled during the Iraq war. And Darpa-funded projects are already working on biometric identifier devices that can scan irises and even fingerprints from further distances than Smart Mobile Identity — to say nothing of next-gen biometrics projects that can scan thearea around your eye, your odor, and even the way you walk.

It’ll be a very long time before any of those detection systems can run on a phone, however. And even with the Defense Department’s budget crunch, the Army and now the Navy are showing interest in equipping their troops with smartphone and smartphone-like devices. Enabling them to scan someone’s physical features with the same device may not be a step too far.