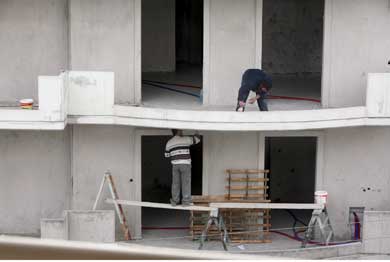 Some time ago we used to joke that the Greek economy, and by implication society, is literally falling apart due to its sacrifice at the altar of preserving the European, and thus global, status quo. It is no longer a joke, and the latest confirmation of the absolute halt in the Greek economy, which is now way beyond the liqudity trap and is now in a liquidity (and everything else) tiger cage is data on Greece Construction activity which according to data released on Tuesday by the Hellenic Statistical Authority is in complete freefall. From Kathimerini “In November 2012, total activity dropped 66.6 percent year-on-year in terms of building permits, 63.3 percent in terms of surface area and 65.4 percent in terms of volume.” Just 1,156 permits were issued across the country, corresponding to 197,000 square meters and 706,900 cubic meters. In the first 11 months of last year construction activity shrank by 36.4 percent in terms of permits, 30.3 percent in surface area and 28.7 percent in volume, compared with the same period in 2011. The statistics observed in private construction activity are virtually the same as the above, as activity in the public sector has effectively ground to a halt.

And for those curious how the people are surviving, the answer is simple: nobody is paying taxes:

More and more professionals are withholding value-added tax from the authorities in a bid to maintain cash flows.

Financial Crimes Squad (SDOE) inspections last months led to fines imposed for the nonpayment of VAT and the tax on salaried service growing by 51 percent within a period of just one year: In January 2013 the fines amounted to 35.3 million euros, compared to 23.3 million in January 2012.

In total the fines imposed by SDOE inspectors last month amounted to 258 million euros, from 217.4 million euros in January 2012. Notably, while there were more inspections conducted (1,559 against 1,460) and while more fines were imposed, the violations identified were actually lower in number: In January 2012 the violations numbered 5,332, while last month there were just 2,999 identified. Most of those violations concerned the issuing of fake financial data.

The question now is how these fines will be collected, as experience to date shows that despite the imposition of fines, debtors often fail to turn up to settle their accounts, at the expense of public coffers.

Good luck with the collections Greece, especially if they are at night as soon the public utilities themselves will soon be halted:

The phenomenon of electricity theft has grown out of control due to the economic crisis and the inability of many to pay their bills.

While before the crisis power theft was only seen in certain downgraded areas such as Roma settlements, it has now spread across the country and into expensive areas too, including the northern suburbs of Athens.

Officials at the Hellenic Electrical Energy Distribution Network Operator (DEDDIE) estimate that the turnover from electricity theft at businesses alone has quadrupled within just one year, climbing from 10 million euros in 2011 to 40 million in 2012.

The methods employed to steal power vary although authorities believe that in many cases electricians are paid to carry out the illicit connection. Public Power Corporation’s data on its lost income have been compiled from checks on corporate supplies, as there are no inspectors available to conduct random checks on household meters.

“Unfortunately [the illegal] connections are conducted in such a way that cannot be noticed by inspectors who check the meters once every four months,” a DEDDIE official told Kathimerini. “We have information about con artists who have made electricity theft their profession, but this information is not sufficient for us to catch them.”

So to paraphrase Rajoy, when excluding everything else, Greece is fine.

1 thought on “Greece: Economy Grinds To A Halt As New Construction Implodes By 66.6%”