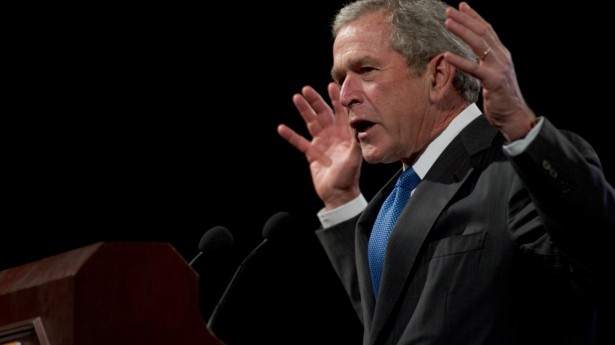 Personal information stolen from several email accounts belonging to people close to the Bush family reveals the nation’s 43rd president has developed an affinity for painting himself bathing, of all things.

Three of the images also show paintings Bush created, including one of himself in the shower, another of himself in a bath, and a third of him crouched over a canvas depicting a church.

A hacker going by the name “Guccifer” claimed the stolen messages include addresses, phone numbers and email addresses that go directly to both former presidents and their families, along with a security code for a gate outside the younger Bush’s home in Dallas.

The emails also reveal that Bush 41′s health was actually much worse than disclosed when he was hospitalized recently. His former chief of staff wrote members of the Bush family last December to somberly declare, “your dad’s funeral team is having an emergency meeting at 10 a.m. just to go through all the details.” The message asked that former First Lady Barbara Bush not be informed.

Bush 41′s outlook became so dire at one point that the younger president Bush wrote on December 26th that he was “thinking about eulogy” and asked for some suggestions on warm memories of his father. Bush 43 also pushed back against the idea of President Bill Clinton speaking at the funeral, “since the feeling is that you all would rather me speak than bubba, please help.”

The nation’s oldest living president, now 88 years old, was discharged from the hospital in January after two months battling an infection and bronchitis.

The hacker reportedly claimed that his latest coup is just one among “hundreds,” adding: “i have an old game with the fucking bastards inside, this is just another chapter in the game.”