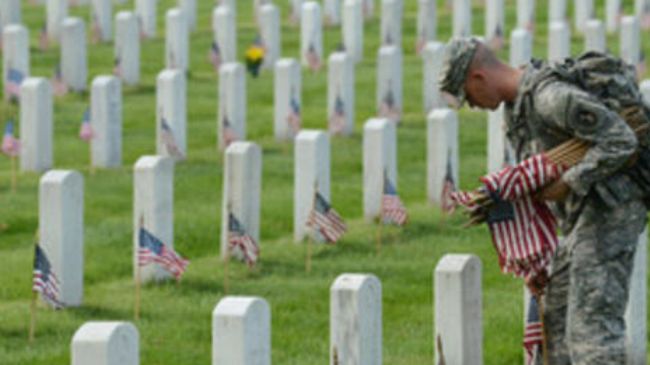 A new official US study says that nearly 22 war veterans of the country commit suicide per day, an estimate that is almost 20 percent higher than the 2007 rate suggested by government’s Department of Veteran Affairs (VA).

The two-year study, performed by a VA researcher, further suggests that two-thirds of the veterans who kill themselves are 50 year old or older, indicating that the surge in the suicide rate among US veterans is not chiefly shaped by soldiers that recently fought in the US-led war in Iraq and Afghanistan, The Washington Post reports on Friday.

“The rate is going up in the country, and veterans are a part of it,” said VA epidemiologist Robert Bossarte, who conducted the study, further showing that the overall number of suicides in the United States climbed by about 11 percent between 2007 and 2010.

According to the study’s data, the suicide rate among US veterans is nearly three times the overall national average but an identical percentage of male veterans in their 50’s commit suicide as do non-veteran men in the same age group.

Bossearte further added that men in their 50s, which consists of a considerable percentage of the American war veteran population, have been “especially hard-hit” by the national surge in suicide rate.

The VA researcher, according to the report, reiterated that a great deal of work needs to be done to better understand the data, especially those that concern the persisting suicide risk among veterans of recent US wars in Iraq and Afghanistan.

Although they represent a minority of the overall American veteran population, recent studies have indicated that those who fought in recent US wars overseas are 30 percent to 200 percent more likely to commit suicide than their ­non-veteran peers.

To determine the suicide rate among US veterans, Bossarte and his lone assistant “spent more than two years, starting in October 2010, cajoling state governments to turn over death certificates for the more than 400,000 Americans who have killed themselves since 1999,” the report says, adding that the study is based on information obtained from 21 of 42 states that agreed to provide data to the VA researcher.

The study, according to the report, follows long-standing criticism that the governments Veterans Affairs Department has “moved far too slowly even to figure out how many veterans kill themselves.”

3 thoughts on “22 US War Veterans Commit Suicide Every Day”