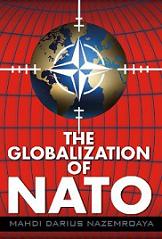 @Amazon.com: The Globalization of NATO

@Amazon.de: The Globalization of NATO

“The Globalization of NATO by Mahdi Darius Nazemroaya is simply magnificent, erudite and devoid of the ethnocentrism to which one has become so accustomed from Western authors. The book deals with what doubtless are the most important and relevant issues of the day for all those committed to saving life and protecting Mother Earth from rampant human irresponsibility and crime. There is no other book that, at this particular time, I would most heartily endorse. I think Africans, Near Eastern peoples, Iranians, Russians, Chinese, Asians and Europeans generally and all the progressive Latin American countries of today will find a much needed reinforcement and support for their peaceful ideals in this excellent must-read book.”
–MIGUEL D’ESCOTO BROCKMANN, Foreign Minister of Nicaragua (1979-1990) and President of the 63rd Session of the United Nations General Assembly (2008-2009): Managua, Nicaragua.

“We are far away from the principles and objectives for which the United Nations was created and the decisions of the Nuremberg Tribunal stipulating that some state actions can be considered crimes against peace. Nazemroaya’s book, in addition to reminding us that the role of the United Nations has been confiscated by NATO, elaborates the danger that the North Atlantic Treaty represents to world peace.”
–JOSÉ L. GÓMEZ DEL PRADO, Chairman of the United Nations Working Group on the Use of Mercenaries (2005-2011): Ferney-Voltaire, France.

“Through carefully documented research, Mahdi Darius Nazemroaya analyzes the historical and geopolitical evolution of NATO from the Cold War to the post 9/11 US- led “Global War on Terrorism.” This book is a must read for those committed to reversing the tide of war and imperial conquest by the world’s foremost military machine.”
–MICHEL CHOSSUDOVSKY, Professor Emeritus of Economics at the University of Ottawa and Director of the Centre for Research on Globalization (CRG): Montréal, Canada.

“A very timely book. Yes, US-led NATO is globalizing, like the US-led finance economy. No doubt also for it to protect the latter, the “free market.” It is a classical case of overstretch to help save the crumbling US Empire and Western influence in general, by countries most of whom are bankrupt by their own economic mismanagement. All their interventions share two characteristics. The conflicts could have been solved with a little patience and creativity, but NATO does not want solutions. It uses conflicts as raw material it can process into interventions to tell the world that it is the strongest in military terms. And, with the help of the mainstream media, it sees Hitler everywhere, in a Milosevic, a bin Laden, a Hussein, a Qaddafi, in Assad, insensitive to the enormous differences between all these cases. I hope this book will be read by very, very many who can turn this morbid fascination with violence into constructive conflict resolution.”
–JOHAN GALTUNG, Professor Emeritus of Peace Studies and Sociology at the University of Oslo and Founder of the International Peace Research Institute in Oslo (PRIO), the Galtung- Institut, and the Transcend Network: Oslo, Norway.

“Mahdi Darius Nazemroaya’s prolific writings give us a comprehensive understanding of the character of the military thrust and it’s all out, no holds barred STRATEGIC plans and moves to invade, occupy and plunder the resources of nations, inflicting unprecedented barbaric acts on civilian populations. He is one of the prescient thinkers and writers of contemporary times who deserves to be read and acted upon by people with a conscience and concern for humanity’s future.”
–VISHNU BHAGWAT, Admiral and Chief of the Naval Staff of India (1996-1998): Mumbai, India.

“This is a book really necessary to understanding the role of NATO within the frame of long-term US strategy. The Globalization of NATO by Mahdi Darius Nazemroaya not only provides an articulate analysis on the Atlantic Alliance: it is the best modern text devoted to the hegemonic alliance. With this book Nazemroaya reconfirms his ability as a brilliant geopolitical analyst.”
–TIBERIO GRAZIANI, President of the Institute of Advanced Studies in Geopolitics and Auxiliary Sciences/L’Istituto di Alti Studi in Geopolitica e Scienze Ausiliarie (IsAG): Rome, Italy.

“Nazemroaya is an unbelievable prolific writer. What has often amazed many is his almost nonstop writing on extremely important issues for the contemporary world and his analysis about the globalization of NATO. What amazes many of us in other parts of the world are his seemingly limitless depth, breadth and the thoroughness of his knowledge that has been repeatedly appearing in his work. We are deeply indebted to Nazemroaya’s humble, tireless and invaluable contributions through his fearless, insightful and powerful writings.”
–KIYUL CHUNG, Editor-in-Chief of The 4th Media and Visiting Professor at the School of Journalism and Communication at Tsinghua University: Beijing, People’s Republic of China.

“The Journalists’ Press Club in Mexico is grateful and privileged to know a man who respects the written word and used it in an ethical way without another interest other than showing the reality about the other side of power in the world. Mahdi Darius Nazemroaya gives voice to the “voiceless.” He can see the other side of the moon, the side without lights.”
–CELESE SÁENZ DE MIERA, Mexican Broadcaster and Secretary-General of the Mexican Press Club: Federal District of Mexico City, Mexico.

“With his very well documented analysis, Mahdi Darius Nazemroaya has conducted a remarkable decryption of the strategies implemented by NATO – in the interests of the United States, the European Union and Israel – to expand its military grip on the world, ensure its control over energy resources and transit routes, and encircling the countries likely to be a barrier or a threat to its goals, whether it be Iran, Russia or China. Nazemroaya’s work is essential reading for those that want to understand what is being played out right now on the map in all the world’s trouble spots; Libya and Africa; Syria and the Middle East; the Persian Gulf and Eurasia.”
–SILVIA CATTORI, Swiss political analyst and journalist: Geneva, Switzerland.

1 thought on “NATO: Proudly Delivering Death Since 1949 – New Book: ‘The Globalization Of NATO’”