A quick ranking of the world’s most “miserable” countries, based on the conventional measure of the Misery Index which is simply the Unemployment Rate plus Inflation, shows just why most people in Spain are, well, less than happy (and Spain is damn lucky there is no subset of the Misery index for just those aged 25 and under as we would certainly need a bigger chart). As the chart below shows, the Spanish “misery” is now the greatest in the world, at some 30%, and is worse than South Africa, Greece, Venezuela, Argentina and Egypt. 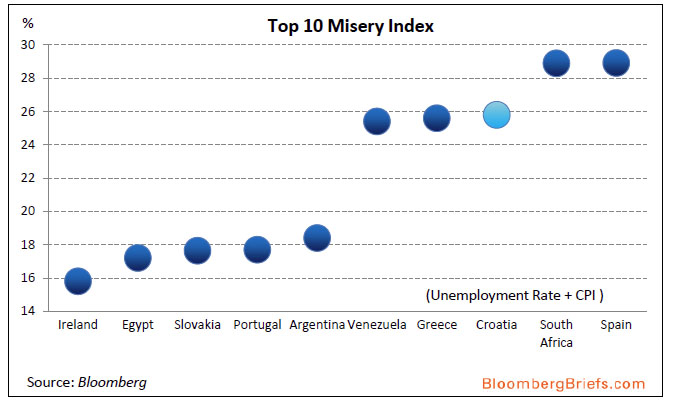 But fear not Spain: Croatia which is set to join the EU in July is forecast to have a debt/GDP ratio of 63.6% by 2017 from 29.3% in 2008 as growth stagnates. The country has one of the lowest labor participation rates in Europe at about 50 percent, the ILO says. In other words, at just 26%, it a virtual guarantee that Spain pole position is about to be eclipsed as Europe does the one thing it is truly good at: spread misery for the “common good.”