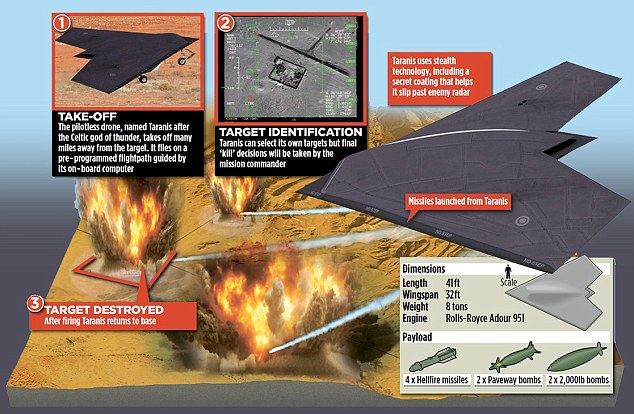 – Set for take-off: Britain’s deadly superdrone that picks its own targets but experts warn plane could mark the start of ‘robot wars’ (Daily Mail, Jan 26, 2013):

It is named after the Celtic god of thunder, can fly faster than the speed of sound and evades enemy radar with its single-wing stealth design.

This is Taranis, Britain’s latest pilotless combat aircraft, which is even capable of selecting its own targets.

The revolutionary superdrone is due to make its maiden flight in the next few weeks and could spearhead the fight against  terrorism in Africa.

But the new developments in pilotless aircraft are controversial as they allow the possibility of autonomous computers  targeting and killing enemy combatants outside human  control.

Experts even warned last night that the new technology raised the nightmare spectre of out-of-control robots waging war on humans – and called for a global ban on autonomous technology.

Britain’s armed drones are currently piloted remotely by aircrews on the ground. But Taranis will follow a set flightpath using on-board computers to perform manoeuvres, avoid threats and identify targets. Only when it needs to attack a target will it seek authorisation from a human controller.

Professor Noel Sharkey, a robotics engineer specialising in autonomous military systems at Sheffield University, said last night:  ‘This is a very dangerous move. Once it has been developed, who knows what new governments who inherit the technology will do with it.’

The controversy surrounding their use was highlighted last week when the United Nations launched an investigation into the deaths caused by conventional drone attacks.

British Forces currently operate armed drones only in Afghanistan, where they target Taliban insurgents. However, a proliferation in mainly US military technology has sparked a drone arms race. To compete, the UK Government has committed itself to a new generation of pilotless aircraft which can fly distances of more than  2,000 miles.

A defence source said that Taranis’s long-anticipated maiden test flight has been delayed by technological setbacks as well as UK aviation safety laws which restrict the flight of drones in this country.

But the source added that the aircraft, which weighs eight tons and is about the size of an RAF Hawk jet, will make its first flight in Australia in the next few weeks, where its progress will be closely monitored by  Ministry of Defence chiefs.

Prof Sharkey said: ‘Taranis is a concept prototype – so it is really the beta version of an intercontinental attack plane. With the proliferation of pilotless combat aircraft that is certainly going to happen, it wasn’t going to be long before the person was taken out of the loop.

‘It would be very difficult for a human to keep control of teams of these moving at such speed. It could put ours at a disadvantage to others that did not have a human supervisor. This is why we need a global ban on autonomous drones before proliferation begins in earnest.’

But the MoD says the programme is designed so that a human will make the final decision on the firing of weapons and that as a ‘demonstrator’ it was far too early to say what role Taranis would have in future combat missions.

The superdrone, manufactured by BAE, is the product of a 2006 MoD decision to develop and fly an uncrewed aircraft that goes one better than current US systems by using a customised Rolls-Royce jet engine rather than a propeller.

When its sleek design was first unveiled in 2010 at an  airfield in Warton, Lancashire, it was accompanied by boasts from its designers that Taranis could strike at the heart of  Britain’s enemies without risking British lives.

An MoD spokesman said: ‘Taranis is a trailblazing project that reflects the very best of our nation’s advanced design and technology skills and is  a leading programme on the global stage.

A spokesman for BAE said: ‘Taranis is a joint BAE-MoD programme and we are not at liberty to confirm any details of the forthcoming flight, including the location, timing or who may be present.’