The UK economy shrank by 0.3pc in the final three months of last year, raising the prospect of a triple dip recession, as Britain’s manufacturers suffered their worst year since the financial crisis.

The official figures were the fourth quarter of negative growth in the last five and mean that the UK flatlined for last year as a whole – posting zero growth.

The economy is smaller than it was in September 2011 and still 3.3pc below its pre-crisis peak.

Making matters worse, there was scant evidence in the data that the economy is rebalancing from consumption to manufacturing. Output by Britain’s factories fell by 1.5pc in the quarter and by 1.8pc for the year as a whole – the first annual decline since 2009.

Howard Archer, economist at IHS Global Insight, described the situation as “dire” and added: “We believe the economy is essentially flat at the moment. We suspect that GDP will not return to the level seen in the first quarter of 2008 until the first half of 2015 – a gap of seven years.”

However, the figures were distorted by a collapse in output in the extraction industries due to “to an extended and later than usual maintenance period at the UK’s largest North Sea oil field”, the Office for National Statistics said.

Excluding the effect of the shut down, the economy only shrank by 0.1pc in the quarter, the ONS said, giving George Osborne some hope that the recovery will pick up this year.

The Chancellor is under pressure to respond to weak growth by toning down his austerity programme to provide the economy with a little stimulus. Olivier Blanchard, the International Monetary Fund’s chief economist, has urged him to take action in the March Budget.

A Treasury spokesman said: “”The official forecast was that the UK economy would contract in the last quarter of 2012 so this figure is not unexpected. It confirms what we already knew – that Britain, like many European countries, still faces a very difficult economic situation.

“It underlines what the Chancellor said at the Autumn Statement and the Governor of the Bank of England said this week: while the economy is healing, it is a difficult road.

“While today’s data confirms the scale of the challenge facing the British economy, this week has also seen the strongest yearly increase in jobs for over 20 years. A million new private sector jobs have been created and the deficit is down by a quarter.” 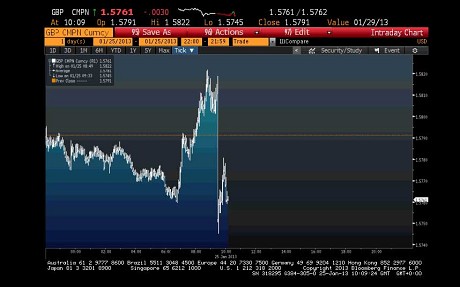 The pound fell against the dollar after the GDP figures were released. Graph: Bloomberg

The biggest driver for the fall in GDP was a 10.2pc quarterly drop in mining and quarrying output, the biggest since records began in 1997, driven by disruption to North Sea oil and gas fields. This knocked 0.18pc off of GDP.

At the start of 2013 one-off factors, such as January’s snow, may push the economy into an unprecedented triple-dip recession, with major retailer John Lewis already warning on Friday that snow had hit sales growth.

Sir Mervyn King, the Bank of England Governnor, expects no more than a “gentle recovery” this year, while this week the International Monetary Fund cut its 2013 forecast for British economic growth to 1pc from 1.1pc predicted in October.

However, even such lacklustre growth could be derailed, as some analysts and business groups warn, by a hit to firms’ and consumers’ confidence from talk of a triple-dip recession.

Rob Wood, economist at Berenberg Bank, said: “Whatever multiple of dips we’re talking about right now .. the UK is bouncing around, the flatlining trend is moving sideways, whatever way you want to describe it.”

“That’s likely to remain a theme for the next couple of quarters, two consecutive quarters of return to contraction driven by an echo of the Olympics, in this case, or snow perhaps in Q1, isn’t going to change the underlying picture, just as one quarter of expansion in Q3 didn’t.

The pound fell sharply against the dollar after the GDP figures were announced. The FTSE 100 dipped after the announcement but has since recovered to trade up 8 points at 6,273.48 – a fresh four-and-a-half year high. 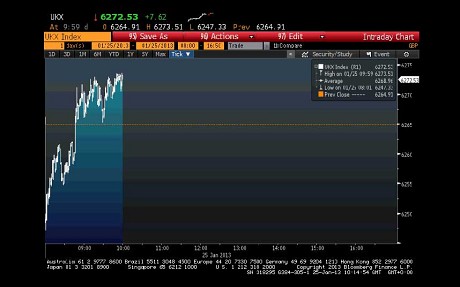 The FTSE 100 is at a four-year high. Graph: Bloomberg