Last week, following documentation from Deutsche Bank (and Nomura), it became clear that Italy’s Monte Paschi (BMPS) bank (the oldest in the world) has engaged in derivatives with the German and Japanese banks in order to save itself during the financial crisis. The derivatives, according to Bloomberg, were done off-market and allowed the booking of large upfront gains which covered losses optically that the bank faced as European liquidity dried up completely – the offsetting ‘losses’ are now coming due. Today, amid growing outcry over the ‘deal’, the former head of BMPS has resigned. Bloomberg reports that Giuseppe Mussari, now Italy’s top banking lobbyist, was the Chairman of BMPS during the derivative deal period. BMPS shares were halted after plunging dramatically as investors are still unclear of the extent of losses it faces on derivatives. If that was not enough chicanery, there is a twist in that none other than Mario Draghi, as Director of the Bank of Italy, would have had to vet Mussari (and his banks’ regulated books) during this period – as BMPS accumulated what is obviously undocumented derivatives positions to intentionally obscure losses. Once again, years later, it seems the truth comes out – and of course we would expect no-one to go to jail – and the lying in Europe (then and now) continues unabated – as the reality of financial system health remains hidden from view. 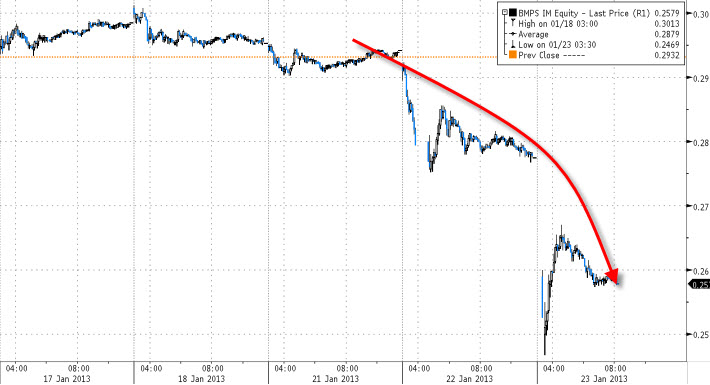 The resignation is effective immediately, he said in a letter posted to the Italian Banking Association today. He leaves as Monte Paschi, where he was chairman from 2006 until April, comes under growing pressure to disclose the extent of losses it faces on derivatives.

“I always acted according to the law,” Mussari, 50, wrote. “I took the decision to not damage the association.”

Monte Paschi said on Jan. 17 it will review its accounts after Bloomberg News first reported that the lender engaged in a derivative with Deutsche Bank AG in 2008 that obscured losses before the Siena-based bank sought a government bailout. The Italian lender, which was bailed out in 2009, is seeking 500 million euros more from taxpayers, bringing the total cost of its rescue to 3.9 billion euros.