Earlier today, we reported that “Assistant Attorney General Admits On TV That In The US Justice Does Not Apply To The Banks” when we commented on last night’s PBS special “The Untouchables.” Explicitly, we said that it was “Lenny Breuer who made it very clear that when it comes to the concept of justice the banks are and always have been “more equal” than others. He does so in such shocking clarity and enthusiasm that it is a miracle that this person is still employed by the US Department of Justice.” As of minutes ago that is no longer the case as his employment contract has been torn up. The WaPo reports, that Lanny A. Breuer is leaving the Justice Department “after leading the agency’s efforts to clamp down on public corruption and financial fraud at the nation’s largest banks, according to several people familiar with the matter….It is not clear when Breuer intends to leave, nor what he plans to do once he departs, but it is certain that the prosecutor’s days in office are winding down, according to people who were not authorized to speak publicly about the matter.” 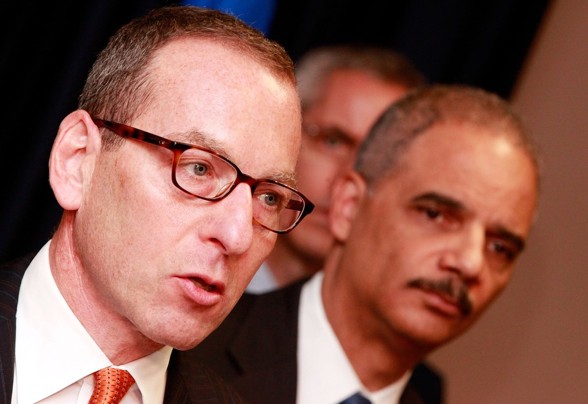 Breuer is widely credited with aggressively going after white-collar crime in the aftermath of the crisis. He also stepped up the division’s involvement in money laundering cases, launching a series of criminal investigations that have resulted in multimillion-dollar settlements.

Critics have also decried Breuer’s routine use of deferred prosecution, which gives the agency the right to go after a company in the future if it fails to comply with the terms of the agreement. They say the use of such tactics amounts to a slap on the wrists of companies that have engaged in egregious behavior. Breuer, however, has argued that the agreements result in greater accountability for corporate wrongdoing.

Or none, as the case may be.

Brauer is not only known for being the bankers’ lackey: his fingerprints are also all over Fast and Furious:

During Senate hearings in 2011, Breuer admitted that he failed to alert other Justice Department officials that federal agents had allowed guns to illegally flow into Mexico and onto U.S. streets between 2006 and 2007. The practice, known as “gun walking,” was also a key part of the Obama administration’s Phoenix gun trafficking operation, Fast and Furious.

The operation came under fire when many of the weapons later turned up at crime scenes in Mexico and the United States, including two where a U.S. Border Patrol agent was killed.

Several officials at the Justice Department resigned in connection with the operation, including Jason Weinstein, a deputy assistant attorney general in the criminal division. Breuer later apologized for his inaction, when the tactics first came to his attention. Sen. Charles E. Grassely (R-Iowa) called for his resignation, but Attorney General Eric H. Holder Jr. stood behind Breuer.As one of the longest-serving heads of the criminal division, Breuer’s tenure has been filled with controversy and high-profile prosecutions. He was admonished for his role in the agency’s botched attempt to infiltrate weapon-smuggling rings in the operation dubbed Fast and Furious. And he has been accused of being soft on Wall Street for failing to throw senior bank executives behind bars for their role in the financial crisis.

Either way, Brauer is gone.

And ironically it is his departure which confirms that everything that could be wrong at the US department of INjustice, is wrong.

Because, with all due respect to this banker muppet, he is merely the tiniest cog in a broken down judicial system, which works (and we obviously use the term loosely) in conjunction with the legislative and executive branches, as well as that implied fourth branch – the Federal Reserve – to further just one thing: the interests of the bankster overclass, who ever since the financial crisis have benefited to the tune of some $5 trillion, or the full amount of incurred debt that future generations of Americans will be responsible for, and yet which benefit primarily the financial oligarch right here and right now.

Fixing the unprecedented level of corruption that has gripped America will not be done with the voluntary retirement of one person who should have done more, but kept his mouth shut (for whatever selfish reasons). The system, sadly, is so rotten to the core, that only a grand reset of every social and political institution will help.

Luckily, we have the Fed for that, which courtesy of its lunatic actions is bringing this once great country every day closer to the abyss.

The good news: there is no turning back now – the entire financial system is now on crash course at a pace of $85 billion per month and accelerating.

The bad news: it will take a while before the final tide subsides for one final time as the status quo will certainly not go without a fight. A very big, and very lethal fight.