Officers say they feared for their safety while arresting Dale Burns, 27, who died two hours later after suffering a heart attack 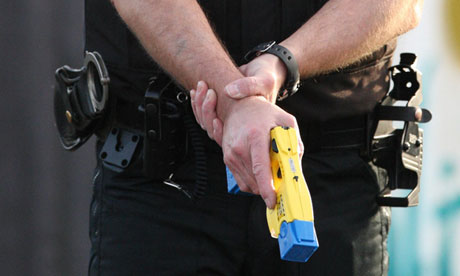 A police Taser was used four times on Dale Burns in his apartment, where he was said to be resisting arrest. Photograph: Scott Heppell/PA

A bodybuilder was Tasered four times in less than a minute by police as they struggled to arrest him, an inquest has heard.

Dale Burns, 27, from Barrow-in-Furness, Cumbria, died hours after being repeatedly hit “without warning” by the electric shock gun and pepper-sprayed in the face, as officers tried to hold him with handcuffs and leg restraints, the hearing was told.

Burns, a father of two, was described as a “gentle giant but with a drug habit” who had taken a “gram of Madcat”, an illegal drug, on the day he died, the inquest at the County Hall in Kendal heard.

Alan Sharp, the deputy coroner for south and east Cumbria, told the jury of five women and six men they may have to see distressing CCTV footage of a wild-eyed and agitated Burns in the police van after his arrest for criminal damage.

Burns died at Furness General hospital two hours after police were first called to his flat on 16 August 2011.

Outlining the case, Sharp told the jury that at around 6pm a woman living in the flat below Burns noticed water coming through her ceiling. The landlord’s agent was called and broke into Burns’s flat to find him undressed, thought to be high on drugs and possibly self-harming. The police were called at 6.33pm.

Two police cars and a police van arrived, with a total of six officers. They found Burns in his flat naked from the waist up, sweating and very agitated.

“Dale told PC Milby, ‘I have taken one gram of Madcat’,” said Sharp, referring to the drug MDPV, or methylenedioxypyrovalerone.

The officers decided to call an ambulance and “tried to engage Dale” in the living room, with the situation seemingly under control. But when the paramedics arrived, Burns “indicated in clear terms” he did not want treatment and they left.

As the bathroom toilet, extractor fan and light fitting were broken, Burns would have to be arrested for criminal damage, the inquest was told. He was becoming increasingly agitated and aggressive, throwing things around the room and objects out of the flat window on to the street below.

“After throwing a glass out of the window, Dale turned towards PC Milby and approached him, eyes rolling into the back of his head with fists clenched,” Sharp told the jury. “He was fearful he would be attacked and feared for his own safety. The officers said there was simply no time to issue a warning.”

At 6.50pm PC Kilby fired the Taser for the first time, with the barbs lodging on Burns’s torso, and a five-second pulse of electrical charge struck him. It caused him to fall backwards then forwards, knocking his head on a TV cabinet, said Sharp.

Three seconds later the officer discharged the Taser again, for a further five seconds, but this allegedly did not stop Burns, who struggled as officers tried to handcuff him.

Twenty-three seconds later the Taser was used again. Between the second and third discharge another officer used a pepper spray on Burns.

The third discharge was “not successful” in enabling the officers to handcuff him, and at 6.50pm and 52 seconds the Taser was used on him for a fourth and final time.

The officers then managed to get handcuffs and leg restraints on him, and decided to carry him down the three flights of stairs to the police van outside to take him directly to hospital.

“During all this time, Dale was said to be struggling violently with the officers,” Sharp said.

Burns was carried to the emergency ward at Furness hospital in Barrow, where medics administered diazepam at 7.35pm and he calmed down. But at 7.43pm he had a seizure that lasted several seconds. He was connected to a monitor that showed he had high heart rate, blood pressure and temperature, plus low blood-sugar levels.

Burns then suffered a heart attack, and despite hospital staff and a police officer giving CPR for 40 minutes, he was pronounced dead at 8.41pm.

A postmortem examination revealed there was no abnormality in Burns’s heart, but there were traces of MDPV in his blood.