Most meat eaters may be unaware that more than 70% of all beef and chicken in the United States, Canada and other countries is being treated with poisonous carbon monoxide gas. It can make seriously decayed meat look fresh for weeks. The meat industry continues to allow this toxic gas injection into many of the meat products people consume on a daily basis. The question is, how many people have become ill by this chemically altered meat that is being sold to families all over the world?

Carbon monoxide (often referred to as CO) is a colorless, odorless, tasteless gas, one measly oxygen molecule away from the carbon dioxide we all exhale. But that one molecule makes a big difference in that it does very, very bad things to the human body at very, very low concentrations. CO is toxic because it sticks to hemoglobin, a molecule in blood that usually carries oxygen, even better than oxygen can. When people are exposed to higher levels of CO, the gas takes the place of oxygen in the bloodstream and wreaks havoc. Milder exposures mean headaches, confusion, and tiredness. Higher exposures mean unconsciousness and death, and even those who survive CO poisoning can suffer serious long-term neurological consequences. 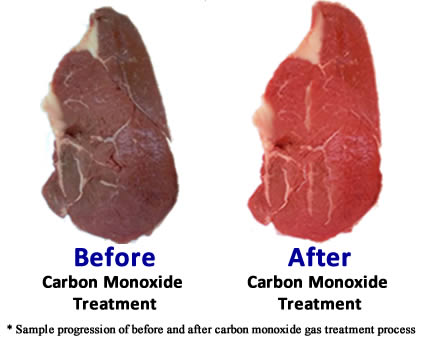 However, keeping meat at these temperatures is very challenging for grocery retailers. The actual surface temperature of displayed fresh meat is often much higher than the thermometer of the display case due to UV radiation from the display case lighting which penetrates the meat packaging and heats the surface just as the sun can cause a sunburn on a cold winter day. Various studies have found that the internal temperature of meat from display cases does exceed 50 degrees Celsius which is more than 10 degrees higher than recommended temperatures.

In a carbon monoxide system, with low oxygen, the carbon monoxide will react with the myoglobin and give the meat a bright red colour. The low oxygen mixture artificially limits the growth of spoilage organisms that are commonly caused by increased levels of heat in display cases.

So although carbon monoxide is a gas that can be fatal when inhaled in large quantities, the meat industry insists that it is not harmful to human health when ingested via atmospheric packaging.

This is not true of course since C. perfringens bacteria, the third-most-common cause of food-borne illness, has been proven to grow on what is considered fresh meat right out of the supermarket that is well within the expiry dates on the labels. Marissa Cattoi a lab tech who analyzes meat samples for a health and safety agency says the bacteria are commonly found on fresh grocery meat. “We commonly test for C.perfringens bacteria and about half of the fresh meat products that come in are positive despite them being within the expiry period. 100% of the these cases come from packagers who adopted atmospheric packaging methods such as the use of carbon monoxide gas,” she stated.

Natasha Longo has a master’s degree in nutrition and is a certified fitness and nutritional counselor. She has consulted on public health policy and procurement in Canada, Australia, Spain, Ireland, England and Germany.