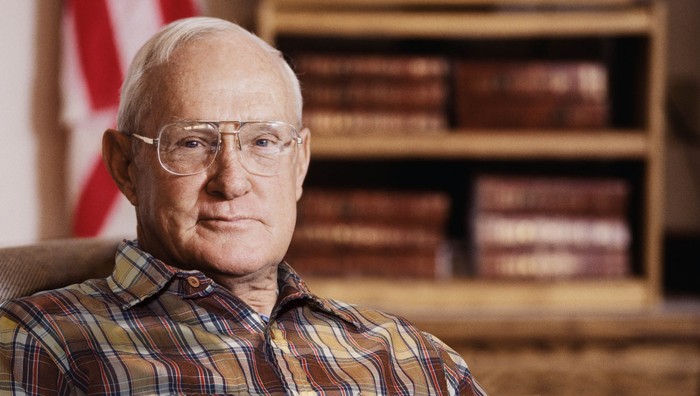 Bailey, the last thing standing between the American people and a totalitarian state.

– 62-Year-Old With Gun Only One Standing Between Nation And Full-Scale Government Takeover (THE ONION, Jan 22, 2013):

NORFOLK, VA—According to numerous reports, local 62-year-old Earl Bailey, who owns a shotgun and several boxes of ammunition, is currently the last bastion of defense between the United States of America and the federal government’s plot of a full-scale takeover.

Bailey, a recent retiree and a proud advocate of gun rights, has been confirmed by multiple sources as being a true patriot, and is, at present, the only person capable of preventing top-secret forces within the government from striking and forcefully coercing hundreds of millions of Americans to submit to a fascist and brutal New World Order.

Since the early 1990s, sources estimated the gun owner has staved off innumerable large-scale government threats, all from the center of his 12-acre ranch.

“It is every American’s right to be good and armed, and that’s a right that should always be protected,” said Bailey, now the sole American protecting the nation from the government’s hidden plot of disarming all citizens, gradually gaining control of the mass media, and installing martial law throughout the nation’s streets. “Our Founding Fathers intended for each and every one of us to protect ourselves from tyranny. That’s what America is all about.”

“What happens when the feds show up at your front door and start telling you how much meat you can eat or how to raise your kids?” continued the lifetime NRA member, brandishing the very weapon that now serves as the final hope of staving off a totalitarian state. “Is that the future you want?”

Bailey, who keeps his gun on his person at all times and regularly patrols his property in his truck, has reportedly struck dread into the very highest-ranking members of the U.S. government. According to sources, top government and military officials are fully aware that they remain unable to commence with their oppressive, systematic subjugation of the American populace as long as the 62-year-old owner of a rifle exists.

Additional reports confirmed that Bailey’s frequent practice of shooting his gun at empty bean cans in his backyard has repeatedly forced government officials to reassess both their ground and air strategies for the impending takeover.

“The way I see it, the Second Amendment’s been keeping this nation free and secure for well over 200 years,” Bailey said, valiantly standing in front of his home that is constantly being monitored by CIA agents and elite Special Forces operatives, who are told to maintain a safe distance from the formidable 62-year-old. “First they’ll come for our guns and next…well, shoot, I don’t really plan on ever seeing what the hell happens next.”

While the federal government is more than adequately prepared to begin the first phase of its plan of convoying Second Amendment adherents to newly established FEMA concentration camps, high-level members of the Obama Administration involved in the widespread conspiracy confirmed that they have been forced to resort to alternate methods due solely to Bailey’s heroics.

“As long as there’s someone like Earl out there with a gun and ammunition, we are unable to carry out our attack on America,” said Maxwell Caufield, a covert military leader in charge of the operation to turn the country into an authoritarian, one-party state wherein the basic rights of citizens are stripped away in order to create total government control. “Try as we did to spread our distorted gun control propaganda—claiming that it would protect innocent people across the country from needless deaths—the man just wouldn’t bite. There is simply nothing we can do about Earl and his gun, damn him.”

“You’ve got to hand it to him, really,” Caufield added. “If it weren’t for Earl, you’d be looking at a totally different country.”