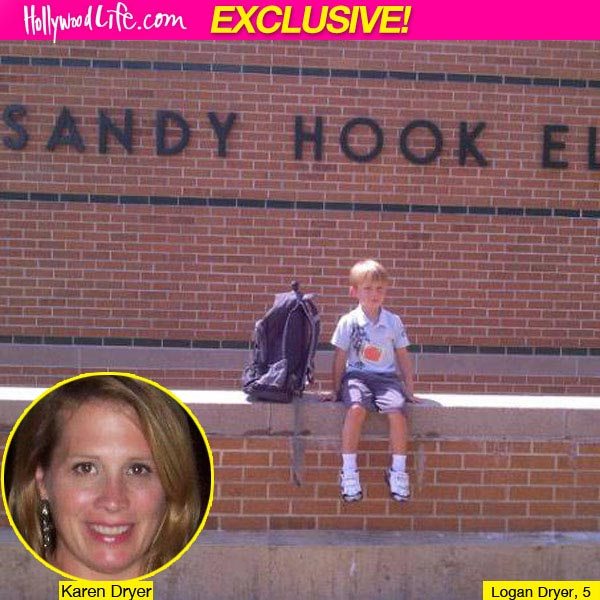 Karen Dryer‘s worst nightmare started to unravel when her  young son Logan Dryer, 5, became so anxiety ridden when he went to kindergarten at Sandy Hook Elementary School that she decided to pull him out of school just two weeks before the deadly massacre.

Like any parent, Karen could not understand why her usually happy, healthy son Logan all of a sudden started having panic attacks while in school. Little did she know, that like her own late mother, her son had the gift to foresee the future.

Nancy tells HollyBaby.com exclusively, “Logan started kindergarten in September 2012. He was perfectly fine in September and October, and then in November he started acting strange. I got an email from his teacher saying he was a little weepy and then I started getting phone calls that Logan was crying and wanted to go home. Eventually it got so bad that I took him to the doctor who ran tests, saying that Logan was perfectly healthy.”

“I remember the principal, Dawn Hochsprung, getting on her knees and saying to Logan, ‘We love you and this is a wonderful place.’ Logan screamed back saying, ‘No, no! It’s not a safe place. I am scared.’ Logan’s doctor suggested that we take him out of school for a couple of weeks and home school him. So we had a tutor come in once a day for an hour and we would visit the school once a week so he could see his friends and teachers. But whenever we visited the school, he would start shaking and trembling. He would cry and he wouldn’t open his eyes,” said Karen.

The principal and the school psychologist Mary Sherlock, 56, who spoke to Logan on the phone daily while he was being home schooled, were both among the first killed in the shootings.

“Logan was perfectly normal wherever we were except at school,” Karen explained. “We couldn’t even say the word ‘school’ in the house because he would get so upset. I would cry because I couldn’t understand what was wrong with my son. I just wanted him to be normal. My teenage daughter went to Sandy Hook and she loved it. So we have a long history there. I would get so frustrated, but I know my son and I had to listen to what he saying. I was not going to give him medication. I just had to be with him and trust that everything happens for a reason.”

“We live down the street from the school and had just been there two days before the shooting. I remember getting a text that said there had been an incident and the local schools would be on shut down. Then I went on the Internet and read that there had been a shooting at Sandy Hook. I don’t know why but I grabbed my son and ran down to the school. I wanted to help. I felt so fortunate because I was one of the lucky parents holding their child.”

“My mother, Milly, who passed away a couple of months ago was very psychic, and I know now without a doubt that my son has the same gift.”

“Today (Jan.2) when we went to the open house, Logan was back to normal. He said he loved the new school, ‘I love it, it looks like a college.’ The teachers were amazed at what they saw because he used to be so scared of school. Now he was running around the school like he owned it. He danced for the teachers. He told me that Grandma was with him at the school and helping him play and that she was also helping me. His doctor is completely dumbfounded. I am blessed that I listened to him.”

Karen intends on taking Logan for his first day back to school tomorrow Jan. 3. She plans on volunteering at the school for the next couple weeks. We wish them both a beautiful day back at school. And of course all of the other families and teachers.