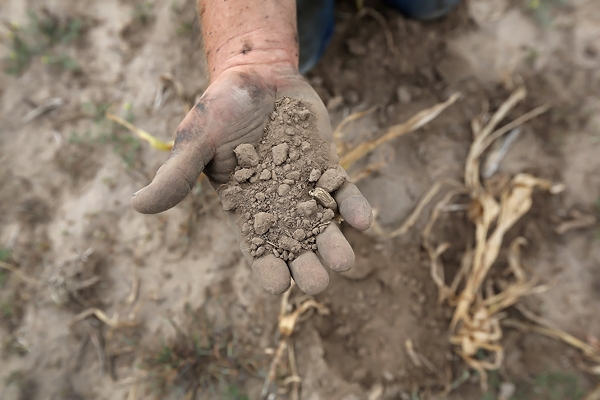 A farmer holds a fistful of arid topsoil in Logan, Kansas.

Droughts, it could be argued, are the opposite of news. By definition, they represent the absence of something (namely, adequate rain) happening. And they only occur when that something has already been not-happening for a very long time. As a result, droughts tend not to make the front page. When they do – as happened last summer, when headlines trumpeted the worst U.S. drought conditions in 50 years – the public gets concerned. But soon enough, droughts begin to feel like business as usual again, invisible in their very ubiquity.

Well, first off, the current drought – which is essentially the same one the U.S. has been experiencing since 2010, and which last year encompassed more than 65 percent of the country, more than at any time since the Dust Bowl in the 1930s – is having some eye-popping impacts that make it tough to ignore. In 2012, more than 9 million acres went up in flames in this country. Only dredging and some eleventh-hour rain kept the mighty Mississippi River from being shut down to navigation due to low water levels; continuing drought conditions make “long-term stabilization” of river levels unlikely in the near future. Several of the Great Lakes are soon expected to hit their lowest levels in history. In Nebraska last summer, a 100-mile stretch of the Platte River simply dried up. Drought led the USDA to declare federal disaster areas in 2,245 counties in 39 states last year, and the federal government will likely have to pay tens of billions for crop insurance and lost crops. As ranchers became increasingly desperate to feed their livestock, “hay rustling” and other agricultural crimes rose.

Still, it’s easy to dismiss even the worst impacts of drought as temporary problems – once some rain falls, we get to move on. It’s over. Right?

Sadly, no. Major droughts have effects that endure long after they’ve technically ended. Food production and food prices can suffer long-term disruptions. Drought-related culling and destocking has left the U.S. cattle herd at a 60-year low; beef prices hit an all-time high in November and are expected to increase. The current drought has also hit producers of staple crops from corn to wheat to hay. Furthermore, drought depletes water reserves in glaciers, aquifers and groundwater on which future growing seasons depend. Officials have reported rapidly declining water levels in the crucial, shrinking Ogalalla Aquifer, and some areas are seeing spikes in water violations as farmers and ranchers overdraw their permits.

Even more troubling, drought conditions are showing signs of becoming self-sustaining. Lack of rainfall today means less moisture is available to create future rainfall tomorrow. Even when it does rain, it doesn’t necessarily help much, as water runs off hard-baked ground in flash floods instead of being absorbed into soil or plant roots. A recent study in Nature explained that drought-stricken trees often die even after rainfall has returned, because their ability to suck up water has been fatally compromised. Even in the worst-affected areas, there has been rain – considerable storms, even – during this drought. But it hasn’t been enough to turn things around. Instead, for most of the drought-stricken U.S., this scary state of affairs is predicted to persist or intensify.

That brings us to the biggest reason not to ignore this drought: It’s a harbinger of things to come.

Last week, a newly released draft of the National Climate Assessment cited severe drought among other recent examples of extreme weather that prove that “climate change, once considered an issue for a distant future, has moved firmly into the present.”

The report warns that the greatest consequences of climate change will come in the form of more extreme “extremes” – not just drought, but also intense heat, rains, flooding and storms. It predicts a future where drought is more severe, U.S. crop yields are lower and the ability of ecosystems to moderate the effects of drought is diminished.

“The Dust Bowl (in the 1930s) lasted for several years, but eventually the rains returned and the region recovered,” U.S. Representative Ed Markey (D-Massachusetts) wrote in a recent letter to the National Oceanic and Atmospheric Administration. “Unfortunately, our current drought may be more than a passing natural phenomenon.”

“Unfortunately” is right. We simply can no longer think of drought as aberrant weather that we can ignore until it goes away. Instead, it’s part of our new, unpredictable normal.