The Department of Energy is proposing to allow the sale of tons of scrap metal from government nuclear sites—an attempt to reduce waste that critics say could lead to radiation-tainted belt buckles, surgical implants and other consumer products.

The department, in a document released last month, said the recycling proposal is in line with its policy of “reusing materials whenever possible.” 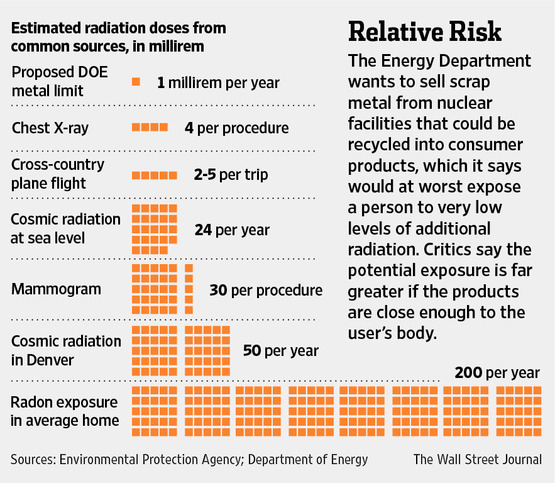 The approximately 14,000 tons of metal under review for possible initial release is only a fraction of the tens of millions of tons of metal recycled annually, it said. Smaller amounts could be eligible for release in future years.

Selling the metals could bring in $10 million to $40 million a year, the DOE estimates.

While the metal would come from “radiological areas” such as research laboratories and nuclear-weapons-related facilities, any contamination would be so low that a member of the public would be exposed to a “negligible individual dose” of additional radiation, the DOE said. The allowable annual radiation dose to an individual from a given shipment of the scrap metal would be half the estimated amount of radiation a person gets flying cross-country, or even less, the document said.

Some industry and environmental groups aren’t satisfied by the government’s assurances.

“We are concerned about what could happen in the marketplace if you have to worry about radioactive material possibly being in your eyeglass frames,” said Thomas Danjczek, president of the Steel Manufacturers Association, a trade group whose members use recycled metals. “Why is the government trying to hurt the image of American products?”

It is difficult and expensive to prevent the commingling of recycled metals. Metal-processing facilities already face contamination problems when they inadvertently accept medical devices and other radioactive products, Mr. Danjczek said. Cleanup from such incidents can cost a recycling plant as much as $15 million, he added.

Some critics argue the DOE’s proposed exposure standards are too high and that information provided in its 50-page document explaining the proposal is even more worrisome.

Higher exposures could occur if contaminated metal is made into items such as belt buckles or hip-replacement joints, said Daniel Hirsch, a lecturer on nuclear policy at the University of California, Santa Cruz, and critic of the government’s proposal. Such exposures would further increase a person’s cancer risk, he said.

On Friday, Rep. Ed Markey wrote to Energy Secretary Steven Chu, calling the recycling proposal “unwise” and stating the proposal “should be immediately abandoned.” The Massachusetts Democrat added that contaminated products could “ultimately be utilized by pregnant women, children and other vulnerable populations.”

A DOE spokesman said procedures for clearing the metals for sale are designed to ensure the materials don’t cause problems for industry. He disputed the claims that the metals could possibly cause higher radiation exposures to individuals. The DOE is preparing a response to Mr. Markey, he added.

The current DOE proposal is the latest development in a decadeslong dispute over what to do with waste from the nuclear industry. Government facilities for producing nuclear weapons and conducting other atomic work have generated large amounts of waste, ranging from highly radioactive to clean.

A 1981 Wall Street Journal article chronicled an earlier debate over a similar government plan to sell metal. The proposal drew more than 3,000 written responses, almost all in opposition. One writer suggested government officials “just eat your radioactive waste,” while another called it “one of the more outrageous ideas to come out of idiotic bureaucrats.”

The government recycled some metal from its nuclear sites from the 1990s to mid-2000. The release of about 3,000 tons from a Tennessee facility prompted a report in 2000 from the DOE’s inspector general that said inadequate testing “increased risk to the public.” A test on one unreleased batch showed a radioactivity level several times the allowed limits, the report said.

In 2000, then-Energy Secretary Bill Richardson suspended such metal shipments. He added there wasn’t evidence of public harm from prior releases. The pending proposal says the department has improved its methods since 2000 and that recycling the materials “would be a benefit to the environment.”The DOE said the sites with the largest amounts of the metal are the Brookhaven National Laboratory in New York and Fermi National Accelerator Laboratory in Illinois.